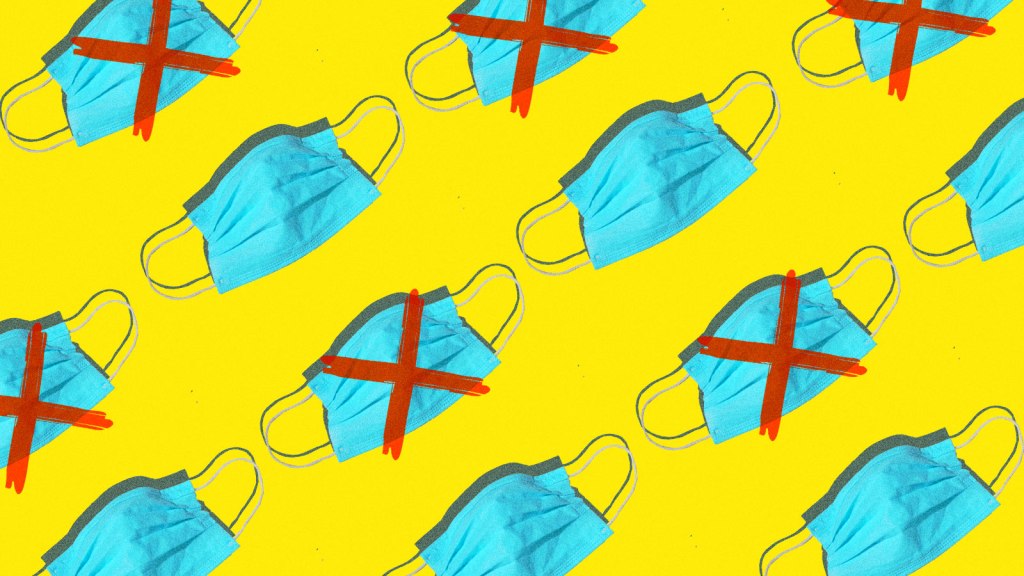 Grist
thanks for masking

Over the pandemic-filled last four months, one thing’s become clear: Face masks can slow the spread of coronavirus and help to flatten the curve. The only issue? Mask-wearing is starting to look like a giant collective action problem — and many Americans are refusing to cooperate.

For months, scientists and doctors waffled about the usefulness of masks. The Centers for Disease Control, or CDC, repeatedly told Americans not to buy or wear them if they had no COVID-19 symptoms; in March, Anthony Fauci, one of the top White House advisors on the pandemic, told 60 Minutes that “there’s no reason to be walking around with a mask.”

But that messaging began to change as new research emerged on masks’ efficacy, and as countries with widespread mask use — like Japan and South Korea — appeared to squash the outbreak more quickly. In early April, the CDC reversed their recommendation, encouraging “cloth face coverings” as a voluntary health measure. Earlier this month, the World Health Organization did the same, advising the general public to wear “non-medical masks” wherever there is widespread transmission of the virus.

According to a growing consensus, the coronavirus travels in droplets spewed from peoples’ mouths when they talk, cough, or breathe. And the latest research indicates that while homemade masks don’t protect the wearer much from virus-laden particles coming in, they do keep those droplets from spilling out. (Medical-grade masks like N95s, on the other hand, do both.)

“If you’re wearing a mask, you’re mainly doing it to protect everybody else around you,” said Jay Van Bavel, associate professor of psychology and neural science at New York University. We would be better off if everyone wore masks, but there’s a small cost to each person that wears them: fogged-up glasses, irritated skin, or just the annoyance of putting it on and taking off. That means there’s an incentive to “free-ride” — if everyone else wears a mask, their caution keeps you safe and spares you the trouble of having to wear one yourself. But the more people free-ride, the more everyone is at risk.

In psychology, this type of scenario is known as a collective action problem, or social dilemma. These problems have plagued society for decades, particularly when it comes to the environment. The ecologist Garrett Hardin famously wrote about the “tragedy of the commons,” or the dangers that result when everyone tries to free-ride on one shared resource, like an open pasture or a lake full of fish. Climate change, meanwhile, may be the most notorious collective action problem of all, since it requires the cooperation of every country on the planet.

America has a patchy record with collective action. It may not be a coincidence that the United States is the only country in the world that’s trying to withdraw from the 2015 Paris Climate Agreement, which calls on nations to cooperate to fight dangerous climate change, or that we have an uneven history of vaccinating children. Americans, it seems, don’t always like being told what to do, even if it’s in the best interest of their communities.

These divisions have shown up during the pandemic, sometimes in unexpected ways. According to an analysis by Peter Sharkey, professor of sociology at Princeton University, one of the strongest predictors of compliance with social distancing is belief in climate change — those who accept that climate change is happening, and is human-caused, are more likely to stay at home. Similarly, an April poll by Morning Consult found that climate skeptics are much less likely to wear masks than those “concerned” about climate change. People worried about one collective action problem (climate change) appear more likely to be worried about another (COVID-19).

Van Bavel, the psychology professor, says that polarization doesn’t automatically mean that these problems can’t be addressed. In many cases, social norms and sanctions (think public shaming) can encourage cooperation. For example, secondhand smoke is a collective action problem, but one that has, at least to some extent, been “solved”: Nonpartisan norms and regulations control where and how individuals can smoke so that they don’t create respiratory problems for others.

Another way to encourage cooperation is through role-modeling. “If somebody you look to and respect and trust is wearing a mask, lots of research suggests you’re going to be more likely to wear one,” Van Bavel said. Unfortunately, though, that trend cuts both ways — elite figures can also undermine cooperation when they eschew social norms.

That has been the case for many prominent Republican leaders during the crisis. President Trump, for example, has repeatedly refused to wear a mask in front of cameras, even though reports say that he sometimes wears one in private; in a rambling interview with the Wall Street Journal last week, he also claimed that Americans wear masks not to protect themselves, but to signal disapproval of him.

But as evidence accumulates in support of masks, some Republicans are changing their tune. In Texas, Governor Greg Abbott spent months refusing calls by mayors to allow mandates for mask-wearing in public spaces, saying that it might infringe on personal liberties. But, in light of Texas’ skyrocketing coronavirus cases and a desire to keep businesses open, he has reversed this position. Many other governors across the country have also recommended or mandated the use of masks.

Now, the U.S. seems to be moving into a new stage of the coronavirus pandemic: Counties and states are focusing less on forced social cohesion through stay-at-home orders and more on individual assessments of risk. As stores and restaurants reopen, people are encouraged to make decisions for themselves about how — and when — to leave their homes.

But mask-wearing can’t be boiled down to a personal decision if we want to slow the spread of the coronavirus. It’s not the first collective action problem to stymie the country, and unfortunately, it won’t be the last. According to Sharkey, the roots of Americans’ stubbornness on collective action go much deeper than COVID-19. It might take better role models, firmer regulations, and stronger social norms, but to address the pandemic — and combat even larger issues, like climate change — Americans are going to have to figure out a way to put society’s interests above their own.