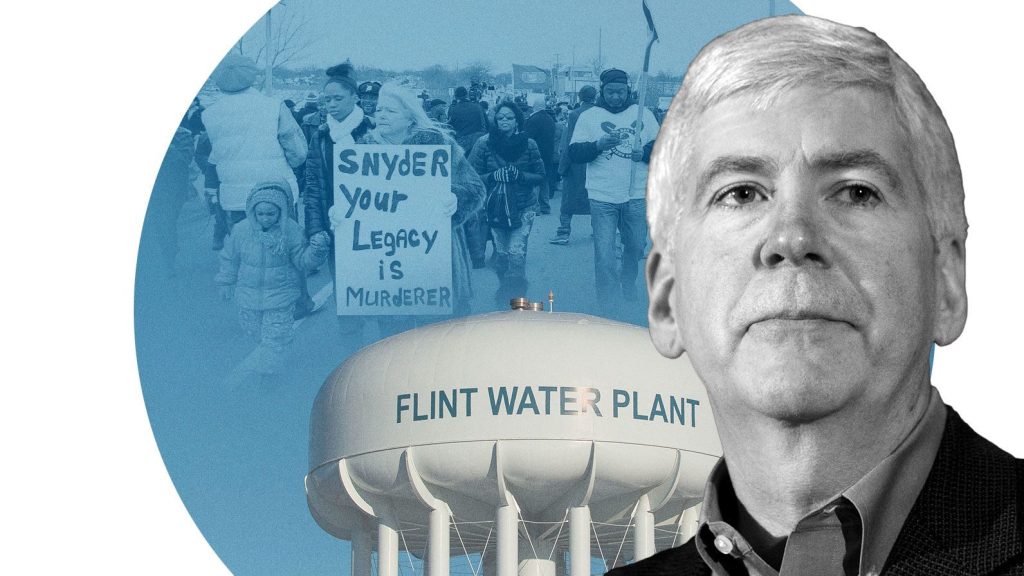 Rick Synder was governor of Michigan when the state approved a 2014 cost-saving plan that switched the city of Flint’s water source from treated Detroit Water and Sewage Department water to the Flint River while a pipeline was built to Lake Huron. The water, however, was not treated to reduce corrosion, leading the majority-Black community of 100,000 to drink and use water laced with heavy metal neurotoxins, coliform bacteria, and lead. Some homes still lack access to clean water today.

Six years, 8 months, and three weeks since Flint’s drinking water became contaminated, Snyder, his health director Nick Lyon, and at least seven other ex-officials have been told they’re being charged for their role in the scandal.

In a 2016 testimony, the city’s utilities chief explained the city’s water treatment plant wasn’t capable of adding corrosion-control treatment without equipment upgrades the budget-strapped city “couldn’t afford.” The untreated water then flowed through aging lead pipes used in much of the city, adding to the contamination.

Bacteria in the water led to multiple outbreaks of Legionnaires’ disease, which causes a severe form of pneumonia, especially in people with weakened immune systems. The crisis led to 12 deaths in the first 18 months after the change in water sources, though activists and journalists believe the total is much larger because officials only counted deaths of those who were diagnosed with Legionnaires’ disease and died while hospitalized or within 30 days of leaving the hospital. A 2019 report by PBS, estimated the crisis was responsible for another 90 deaths.

The Michigan state attorney general’s office declined to comment on details of the ongoing investigation, but charges are expected Thursday, according to the Associated Press.

Snyder and Lyon first announced an outbreak of Legionnaires’ disease in Flint in January 2016, although Lyon later conceded that he knew that cases had been reported many months earlier. Snyder’s urban affairs adviser, Harvey Hollins, told a judge in 2017 that the governor also knew weeks before he revealed the outbreak to the public. In 2018, Lyon stood trial on involuntary manslaughter charges after a special prosecutor accused him of failing to inform Flint residents in a timely manner. The case was eventually dropped after the current Michigan attorney general, Dana Nessel, a Democrat who was elected in 2018, decided to start a new probe.

In response to the AP report on the new charges, Snyder’s attorney, Brian Lennon, released a statement claiming that criminal prosecution of Snyder was “outrageous” and “a political escapade” against the former Republican governor.

In the six-plus years since the crisis began, nearly $400 million has been spent by the state and federal government to help Flint residents secure a clean water source, obtain home water filters, and to upgrade the city’s lead pipes to modern copper pipes that do not corrode. However, the pipe-replacement project, originally set to be completed in 2019, is still in progress after delays due to budgeting and the COVID-19 pandemic.

In the early months of the pandemic, coronavirus hit the community especially hard. Local leaders and health experts contend that the city’s heightened lead exposure and Legionnaires’ outbreaks have contributed to the city’s coronavirus deaths by putting residents at higher risk of complications.

Last August, the city and state reached a settlement to pay roughly $650 million to Flint residents to remedy the public health and economic damages caused by the water contamination. The agreement resolves hundreds of lawsuits against the state related to the water crisis with nearly 80 percent of the money set aside to resolve claims filed on behalf of minors and children. The settlement is the largest in state history and was championed to revitalize Flint, which has the second-highest poverty rate in America among cities with 65,000 or more residents, according to 2018 U.S. Census Bureau data.

Mari Copeny, a 13-year-old activist who has made global headlines for creating a durable home water filter for Flint homes, practiced caution with the most recent development in the water crisis. “I’m not celebrating until we hear the exact charges,” she tweeted Wednesday. “We all know how these things tend to play out.”