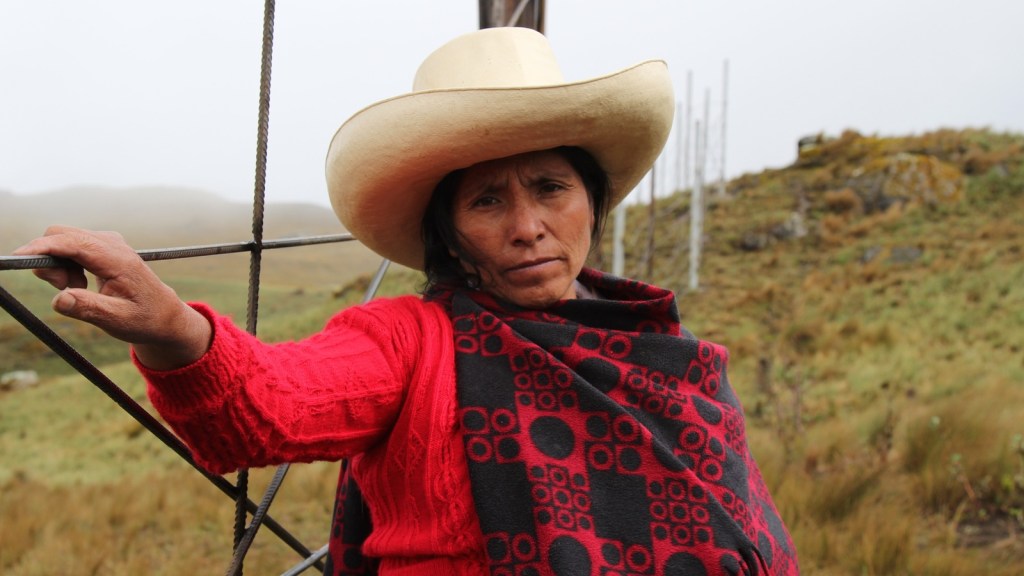 Want to support indigenous land rights? Keep talking about the people fighting for them.

Today, a 47-year-old indigenous farmer from Peru won the Goldman Environmental Prize for repeatedly putting her life on the line to block plans for a gold mine on her property. Máxima Acuña’s fight is against an American mining company, and holds lessons for anyone who might care about things like access to water and food, or, well, global capitalism at large.

Acuña has spent the last five years embroiled in sometimes-bloody conflict with the Newmont Mining Corporation, which is the majority stakeholder in Minera Yanacocha, the developer behind the planned Conga mine in her native Cajamarca region. According to Mirtha Vásquez, Acuña’s attorney and director of the human rights organization GRUFIDES, the mine would create the largest toxic waste deposit of its kind in Latin America. That waste would contaminate the lakes and waterways on which the region’s farmers depend, effectively ruining their livelihoods.

“Máxima’s case represents the fight of economic interests against those of the local population to stay on their land. In this sense, it’s very important to win the case legally — and also important to understand that [this fight] goes beyond the legal case,”  said Vásquez on a call with Grist and other outlets. “This is not just a fight for Máxima’s family, but for the indigenous farming community on the whole.”

A half-decade-long legal battle likely doesn’t strike you as anything too extreme, but as a result of Acuña’s resistance to the development, every facet of her life has been attacked. The list of aggressions she’s suffered includes: her house has been destroyed, she and her family have been beaten to within an inch of their lives, and their farm animals have been slaughtered. According to Acuña and Vásquez, Yanacocha is responsible for building a fence around the perimeter of her property, and maintains a 24-hour watch on her and her family.

Acuña legally owns her property and has refused to sell it to Yanacocha – but nonetheless, the company sued her with the accusation that she was squatting on its land, of which she was initially found guilty. In late 2014 — after years of appeals — Peru’s highest court acquitted Acuña of any charges. Yanacocha, however, has an additional case going in civil court in a further attempt to take over her land.

When we asked Acuña for her take on what those of us in distant, industrialized nations – the ones that tend to house the corporations responsible for this kind of wanton destruction – can do, she urged that people simply keep talking about what’s going on. “It’s very important for people to just be really alert and become aware of what it is that we’re going through, what it is that we’re doing to be able to defend our land,” she said. “Because we’ve seen in Peru that our own authorities don’t speak out against the abuse, the aggression, the violation of [our] rights.”

Acuña’s is no isolated case, and the dangers she has faced are familiar to others who have stood up for indigenous rights.  About a month ago, we spoke with “Bertita” Cáceres, daughter of the late Berta Cáceres, last year’s Goldman Environmental Prize winner and leader of COPINH, an organization that has fought against a hydroelectric development on indigenous lands in Honduras. After years of threats and attacks, Cáceres was tragically assassinated earlier this year for her work with COPINH. Bertita explained the fundamental conflict that all indigenous peoples face when it comes to resource extraction:

“If we want to exist as indigenous peoples, we need to preserve life — and that necessarily implies fighting for the environment. I believe that over the years, colonialism has continued modifying itself, implementing different forms of theft from indigenous populations, and today, [we have] an economic model that has a vested interest in the wealth of nature. The common good of nature, then, has become the center of discourse for the whole world — because indigenous populations and the rest of the world need them to live.”

We asked Acuña how she was affected by the recent assassination of Cáceres, her Goldman Prize predecessor. She responded, fairly chillingly:

“Of course, for me it’s very worrying, very sad — it confirms that we do undertake that risk, as defenders of the earth and water. And because these businesses are very powerful, I don’t know what awaits me when I get back [to Cajamarca]. But this isn’t a cause of fear for me – it’s not a motive for us to stop fighting, to stop defending.

“Because if something like that were to happen to me, I have the confidence, the hope that my God will receive me with open arms — because we are not criminals, we are not assassins, we are not thugs.”

To read Grist’s interview with the North American winner, Destiny Watford of Baltimore, click here, and to find out more about the other winners here.