Seattle’s Capitol Hill Block Party is really nothing like a block party, unless everyone else grew up with a lot more Molly in the lemonade served in their childhood neighborhoods. The fact that it’s way more of a summer festival than a neighborhood get-together isn’t necessarily a bad thing. Personally, I think transforming a couple of city streets into a weekend-long venue is a pretty delightful, if not new, premise for an event.

CHBP has graced the streets of Seattle’s most bewildering neighborhood for 18 years now, and like the neighborhood itself, I’m told that it doesn’t much resemble its 1997 incarnation. The acts are bigger, the tickets are more expensive (well, anything is more expensive than free – a day pass now costs $60 + fees), and #brands (what’s good, Red Bull) make their presence known left and right. For these reasons, plenty of locals really hate the event, viewing it as indicative of the rapid transformation of the city.

There may seem like there are a lot of reasons to leave Seattle right now: The cost of housing is skyrocketing, the public transit system is a disaster waiting to happen, and then – speaking of impending doom – there’s the Earthquake That Will End Us All. With regard to that latter terrifying factor, I took it upon myself to talk to the nice people running around CHBP and ask them what scared them more: That Earthquake, or climate change?

The consensus? Despite the predictions of a cynical Grist staff, a crowd of drunk PNW-ers half-grinding to Ratatat are still smart enough to realize what’s actually more threatening to this fair city. And for those who have given up hope on ol’ Seattle, believing that it hasn’t seemed much like itself this dry, hot summer — or for the past few years, even — this scene might be comforting: Kathleen Hanna shrieking her heart out for a crowd happily enduring a steady and persistent rain.

Read 10 responses to the question “what are you more afraid of, climate change or the earthquake that’s going to destroy Seattle?” below. (Interviews do not correspond with those pictured.) 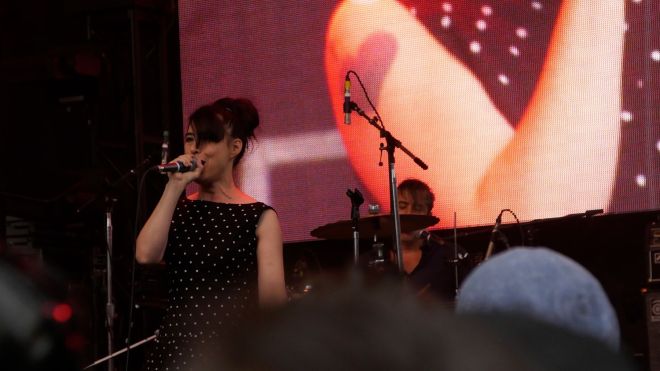 ‘Cause I grew up here, and we’ve always sort of known – even in elementary school, people told you that volcanoes are active, earthquakes are hot, and at the end of the day, this place is eventually gonna blow up. And although that article sensationalized it a lot, at the end of the day, climate change affects everywhere and everyone. And so although it’s more vivid, the earthquake thing is not new information for people who grew up here. It’s old shit, and we’ve been living with this anxiety for a long time. So, yeah, climate change. 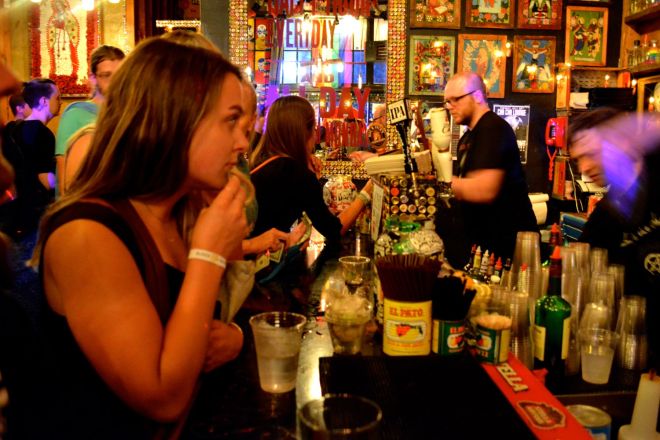 The earthquake is a lot scarier to me!

Why is the earthquake scarier to you?

Um, I don’t know – I actually don’t know. It sounds scarier to me. 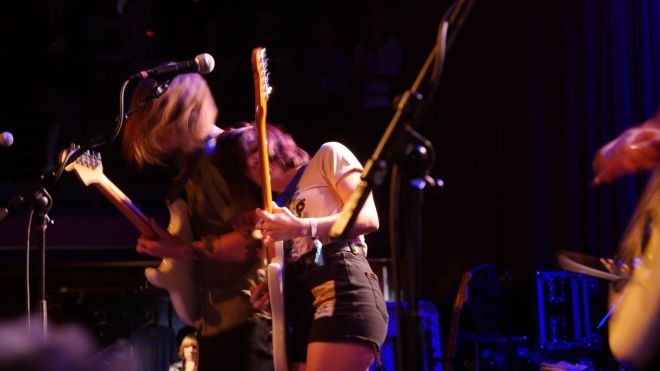 I think I’m afraid of climate change. And the reason why is, I think we can recover from an earthquake – but recovering from global warming is a huge effort, and it has to be a global effort, whereas an earthquake is just regional. Even though it may wipe us out, for a while, like a year or two years, global warming could wipe us out forever. 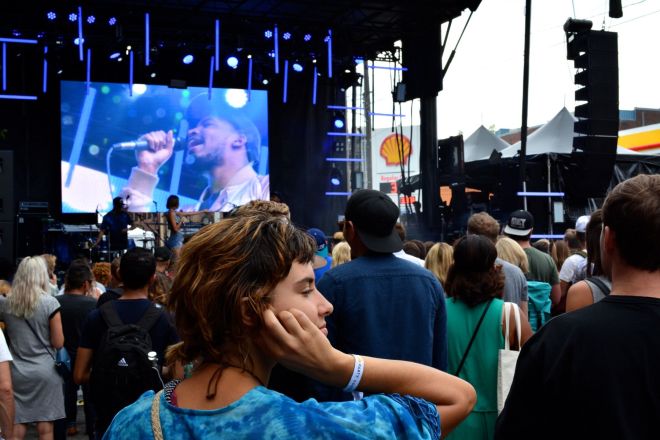 Why are you more afraid of climate change?

Guy: For a few reasons – it’s gonna be longer lasting, and therefore more difficult to do mitigation efforts; 2) it’s global instead of local; and 3) I don’t live in Seattle, sorry.

Girl: No one is denying that there’s an earthquake that’s going to destroy Seattle, and people are denying that there’s climate change. And also, as he said, it’s global rather than local, and from a really utilitarian perspective, that means that it might wipe out humanity, whereas this would just wipe out Seattle. Not that I don’t love you, Seattle – I do, I love you, Seattle! 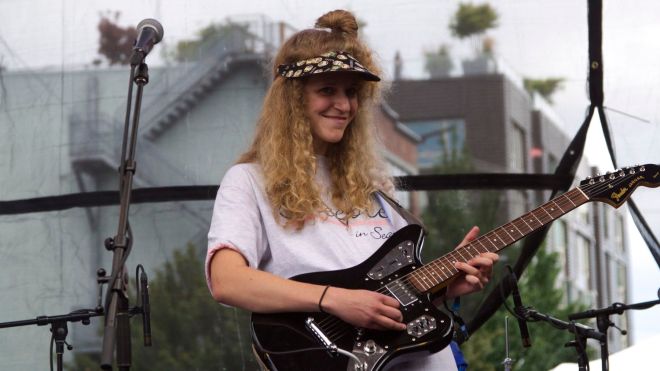 Probably the earthquake, just because I’ve been loving the past two summers we’ve had. I’ve lived in Washington my entire life, and the last two summers are phenomenal. So I’d actually like it to stay the way it is.

So you’re more afraid of the earthquake? 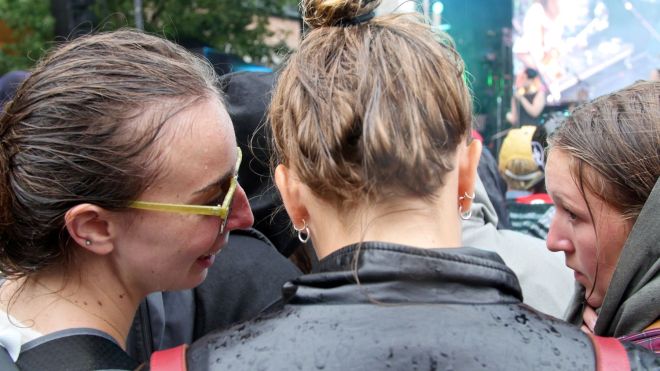 I’d have to say, based on my actions, that I’m more afraid of climate change. I don’t have like a disaster kit at home, or anything like that, so yeah – climate change, it’s scary, for sure.

So based on your preparedness, you’re more afraid of climate change. 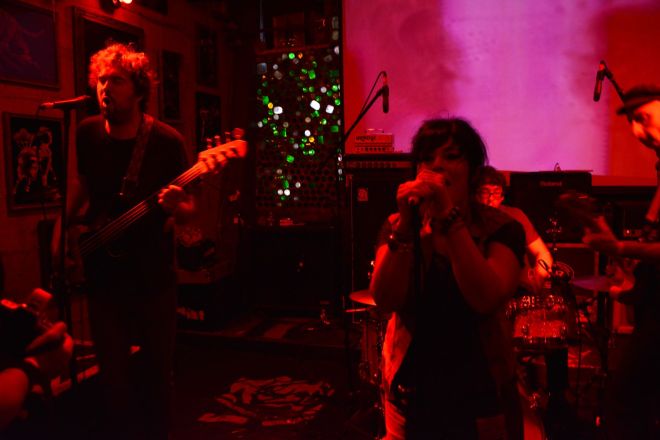 I guess, ah, global warming affects more people than just me. The earthquake is kind of particular to this area.

So, ah, climate change could kill everybody, whereas the earthquake, I don’t know – it could do some expensive damage, but, you know. 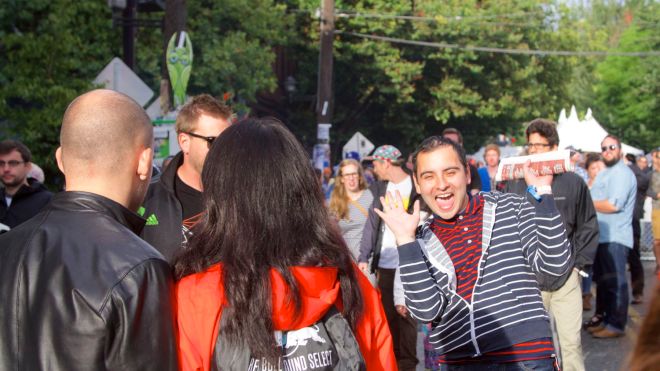 I’ve been in Seattle for 10 years, and I feel like climate change has been so apparent since I’ve lived here, so that has me more concerned than the earthquake. 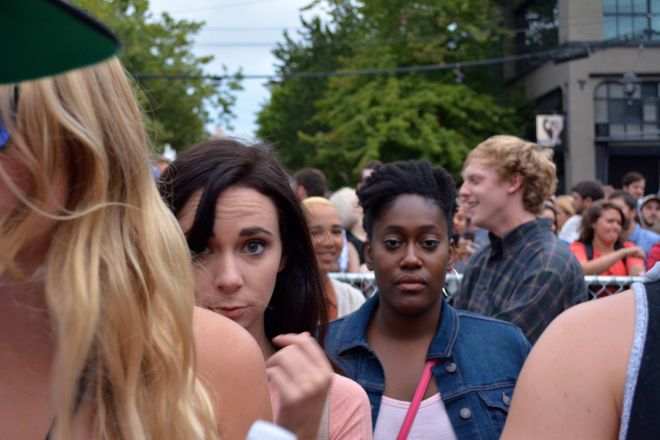 Uh – hold up, my burrito is falling. I guess the earthquake?

I don’t really give a shit about it, to be honest. I’ve heard so many of my friends talk about it. I don’t know. I guess I should be a little prepared, but I’m not? I’ll just run to high ground. 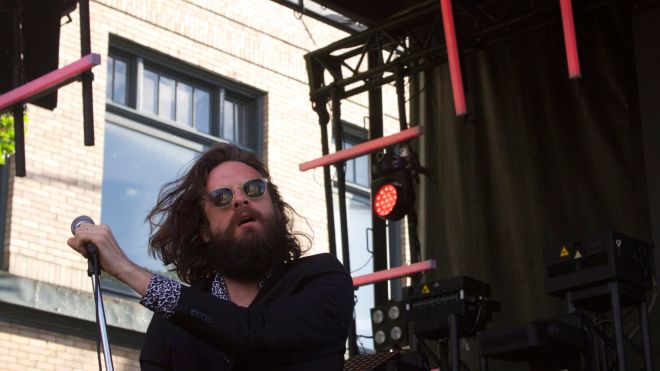 I think the earthquake – who knows when that could happen, and climate change is happening now. But I’ve got a cannon to shoot me up in the event of an earthquake, shoot me a mile high, and then I put on a parachute and I float down while everybody else is freakin out. I’m just chillin’, watchin’ it.

How’d you get that cannon?

Oh, cool. How long have you had it?

Three and a half years.

So you’ve been prepared for the earthquake for three and a half years?

I’m prepared for lots of shit. 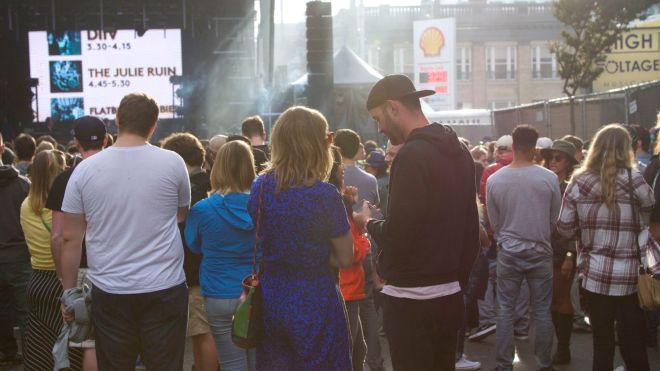