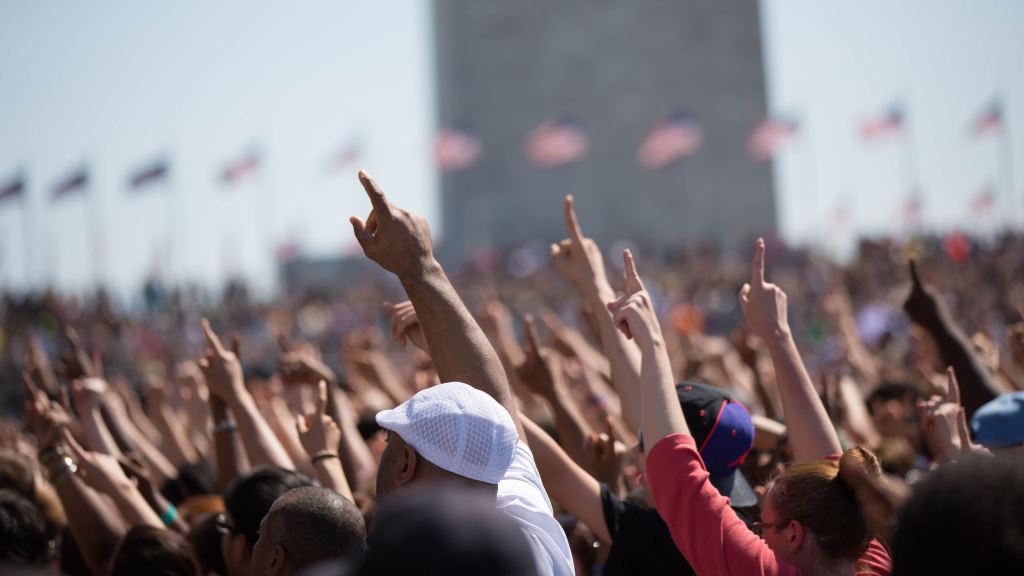 I first heard about Earth Day in 1990, in 8th grade, when I had just started at St. Margaret Mary. It was my first time attending a non-city public school, and my first time learning in a mostly white environment. Before I got there, I worried that I wouldn’t have anything in common with these kids. Little did I realize how influential Yo! MTV Raps was. It supplied me and my new Catholic classmates with the lingua franca of Hip Hop, which had been gradually creeping into white suburbs via cable TV and Viacom.

De La Soul’s 1988 album Three Feet High and Rising was one joint that my new white friends and I were in complete agreement about. The earthy vibes, unorthodox flow, and sampling of 1960s psychedelic bands like the Turtles drew them in, along with all the colorful, floral imagery De La projected. The band declared that we were living in the D.A.I.S.Y. Age.

I put my new friends onto the larger Native Tongue movement, from which they gravitated to A Tribe Called Quest’s People’s Instinctive Travels and the Paths of Rhythm. They recognized Quest’s Q-Tip from Dee-Lite’s trippy “Groove is in the Heart” video, and cried foul with me when MTV would run the version without Tip’s verse in it.

Those connections led to conversations about the Brand New Heavies and the B-52s, which led to the talk where I learned what Earth Day was. I knew the school celebrated it as a holiday, but I thought it was a holiday they made up, like Kwanzaa. My schoolmates filled me in on “environmentalism” with all this stuff about reuse and recycling, cutting off the lights and water, not littering, and I thought, Oh, these are things we already do at home. I didn’t know that was environmental.

Not long into high school, though, the green daisy stuff was already quickly approaching its nadir. I sensed this listening to Black Sheep’s Wolf in Sheep’s Clothing — the skit where rapper Dres gets confronted by some bullying fans asking him why he’s not “making records about the upliftment of black people, the dolphins, fur coats, and the hole in the ozone?” Dres responds that he only raps about things he knows.

De La Soul seemed to be reading the tea leaves. Later that year, Arsenio Hall introduced De La on his late night talk show as “hippies,” which infamously pissed the D.A.I.S.Y. Age rappers off something fierce. The name of their next album said it all —De La Soul is Dead — as did the cover art, which displayed wilted daisies spilling out of a cracked pot.

By 10th grade, Hip Hop had turned a completely new green leaf: The Chronic. Dr. Dre had split off from N.W.A., taking a slice of the Funkadelic sound (used earlier by De La Soul) to form a laid-back, beachy sound fertilized with raw, gangsta lyricism. Nobody was talking about a hole in the ozone layer — we couldn’t see that shit. We were too visually enmeshed in this widely circulating video of Los Angeles cops billy-clubbing an unarmed black man named Rodney King something ugly, while King plead for mercy. We were arrested by news scenes of Los Angeles going up in flames when the cops who beat King were acquitted. Those riots unearthed a repressed, young, black rage — no more D.A.I.S.Y. Age, just soot and ashes.

Come 11th grade, I was back in city public schools. Nobody was listening to people’s instinctive travels anymore. Hip Hop at that point was purely about being locked in the urban environment: Mobb Deep and Nas spit gems about their Queensbridge hood, as Biggie did about Bed-Stuy, Brooklyn. Redman explained The Bricks in Newark, while Outkast introduced us to SWATS, Atlanta; Pac repped the Bay; a young Common Sense told us about Southside Chicago; and Scarface carried the Fifth Ward of Houston. Between the drug war, rising police brutality, and escalating mass incarceration, we had reached an age of peak young black men pushing up daisies.

The Earth Day movement and the modern wave of environmentalism it birthed went through similar growing pains. The organizers of Earth Day in 1970 fancied the annual events as rallying calls for everyone concerned with environmental degradation of the natural, urban, and social varieties. Denis Hayes, national coordinator for the first Earth Day, assured journalists of this on a press call this morning, saying that it “was not entirely based on litter pickups and college kids pounding old cars into the ground with sledgehammers.” Earth Day also took on inner-city problems like waste pollution and toxic lead paint in old homes, he said.

Another core organizer in 1970 was Arturo Sandoval, a Chicano activist in New Mexico who made racial justice, La Raza, and the plight of poor people central tenets of Earth Day activities. African-American politicians from Cleveland, D.C., and New York also infused anti-racism and anti-poverty messages into Earth Day events in their respective cities.

Zoe Carpenter wrote for The Nation yesterday about the great green hope that Earth Day would pull all the major causes under one big tent. Pulling from old Nation articles covering the first Earth Day, Carpenter reminds us that everybody wasn’t on one accord, though. Carpenter found a warning in the archives from U.S. Sen. Edmund Muskie of Maine, who told environmentalists not to become a “‘smoke screen’ obscuring the ‘challenge of equal opportunity.’” Nation correspondent Raymond Coffey expressed concern back then that Earth Day activism might “divert attention and political commitment away from more sensitive issues such as Vietnam, race, and poverty.”

Plenty of African Americans shared these concerns, as the Rockefeller Commission found in a 1969 report on America’s future, in which one black respondent said, “If this [ecology] movement also talks about fewer people, the question of ‘who gets to survive’ is raised. So, to us, it becomes ‘every man for himself’ now, because we have no reason to expect that we won’t get the worst of this one too.”

In the decades since that first Earth Day, environmentalism has been declared dead (having failed to garner wide public support or produce any significant legislative victories since its early days) and risen again, thanks, unfortunately, to climate change. Like Earth Day activists before them, many climate activists believe that this is one issue that transcends the environment, race, class, the urban, the rural, and everywhere beyond the walls.

It was telling that just before the highly anticipated People’s Climate March last September, the Black Lives Matter movement sprang out of Ferguson, in some ways interrupting the climate march momentum. By the time climate marchers reached New York City, they knew that they could not ignore what was happening in the streets of America’s cities. The climate movement and the fight against police violence shared a native tongue: justice.

This Earth Week, we’re seeing new signs of life, especially when seen through the justice lens. Last weekend, the scholar-activist Tyson Lord-Gray launched a new “green community vision” in New York City. Today, a group of young activists and music artists landed in the nation’s capital after a 250-mile “March for Justice” that was mostly about police reform, but was joined by climate justice activist Rev. Lennox Yearwood.

This weekend, Erykah Badu, Joey Badass, Willow, and Jaden Smith will all perform at the Broccoli Fest in D.C., under the banners of environmental, economic, and food justice. And the young, enterprising Abre Conner launches the group Together Restoring Economic Empowerment (TREE), which has climate justice on its radar. The new documentary, Young, Black and Green, also shows a new generation of advocates using justice as its common denominator:

It all kinda has that D.A.I.S.Y. Age feel to it, but something better — call it the Azealia Banks Age. That feeling hit me this morning, when I opened an email from De La Soul, sharing their new song with Nas. Was glad to hear that they’re not dead.