I arrived in the emergency room the morning of Wednesday, Dec. 3, with the singular mission of having doctors examine a jabbing pain in my lower spine. By noon, I was laying face up on a MRI scanner, with dye pumped into my veins so doctors could locate and properly diagnose the problem. The pain was so great that they had to pump me with morphine so that I could rest still for the hour-plus scanning. Hours later, the MRI results found no serious issues in my backbone. However, the scan did turn up something in my chest: a “mass of abnormal cell growth,” roughly the size of a walnut.

It was an “incidental” finding, I was told, and one not likely connected to my back pain. The “mass” was situated close to my spinal cord and perhaps was pressing or attaching itself to sensitive nerves. But the imaging showed no clear association between the problems in my lower spine and the dense blob in my upper chest.

Connected or not, the “mass” is a threat, I’m told, not only because it’s potentially malignant, or cancerous, but because of its position near my heart. There’s a good chance it’s benign, but given its location, there are few chances to take. Meaning, it has to come out. The cell mass is not causing me pain right now, but it could cause major complications later in life. It’s already the size of something that could be problematic sooner in life.

“But what about the pain in my back?” I ask the doctors. At this point it’s late afternoon, and I’m no longer in the emergency room. I’m in the oncology unit. I was given pain medication for my spine, but I’m now talking with surgeons who are tossing around options like biopsies, thoracic surgery, “opening my shoulder up,” or/and chemotherapy.

It was somewhat frightening to hear, but I was too numb for alarm. I looked up at the oldass Zenith TV in my room to redirect from the stressful info. That’s when I heard the news report that a grand jury had decided not to indict the New York police officers who strangled Eric Garner to death on camera, while he repeated “I can’t breathe,” through diced breaths.

In that moment, I considered the mass lurking behind my heart a perfect entrée for the occasion. For the moment, I didn’t care that the growth might be cancerous. In fact, I began inviting its worst blow. I wanted the thing to explode and flat-line me, saving the doctors examination time, and saving my wife and family prolonged suspense and grief. In that moment, I wanted the thing to self-destruct, to not only end my back pain, but to also end the pain in my heart from seeing yet another white police officer go free after killing an unarmed black man.

I felt numb, but bruised, like a scab. I didn’t have enough energy to be angry. On Facebook, I looked at image after image of ensuing protests and rallies, bodies lining the streets for die-ins, covered with signs that read #BlackLivesMatter. The hashtag slogan sounded like people were willing to truth something that should be self-evident. Then I saw the counter-hashtag #AllLivesMatter circulating, which got me a little heated — just enough rage for me to squirm some in my hospital bed, launching sparks of pain from my spine to other parts of my body. My blood pressure was closing in on 150/100.

The thing that mattered most to the doctors in that moment, though, was the growth in my chest, even though it wasn’t visible to the naked eye and posed no immediate threat. The mass had built itself up in stealth mode, but it will make its presence felt if left unchecked. I thought to myself, if the #AllLivesMatter crew ran the hospital, there would be no reason to examine the mass alone because, you know, #AllBodyPartsMatter. 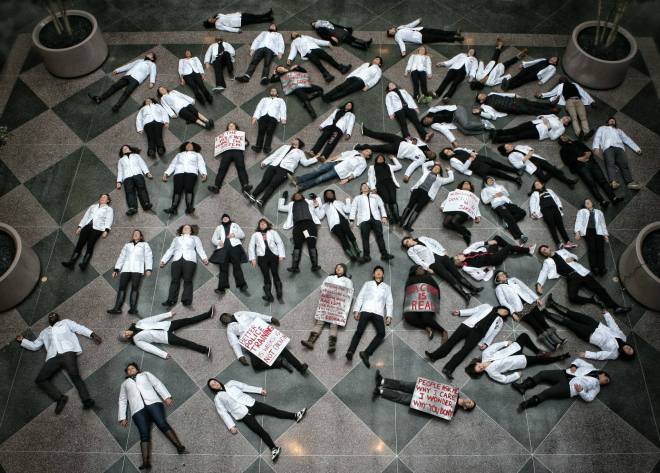 I thought about the undefined cloud by my heart while looking at images of people rallying at the White House, at police departments, on university campuses, and in shopping malls. Too many African Americans have gone unnoticed and invisible for so long, dispossessed bodies taken for granted by deputies who trade in armor and confuse it with aplomb. Ignore black people too long, though, and see if they won’t morph from an assumed benign position to something more virulent, as we’re seeing in Ferguson, Mo.

Don’t confuse the analogy: Black people are not cancer; but the mentality that sees us as some undefined mass, or that sees us as less than human, or that can’t see when we can’t breathe, could potentially stir the kind of riots in the American body that overturns cop cars, burns buildings, and terminates any polite contract between citizen and the law.

These were the thoughts in my head as the days went by, as the pain in my back gradually subsided, and as the #BlackLivesMatter protests elevated. That’s when I came across this story in The Washington Post: “The racial divide in America is this elemental: Blacks and whites actually breathe different air.” It’s a story I’ve done a dozen times for Grist, about how air pollution falls more heavily on predominantly African-American communities than others. I’m glad that the mainstream press is acknowledging it. But then I realize that the story is about Eric Garner.

Garner was “obese” and an asthmatic, as Rep. Peter King (R-N.Y.) was so quick to remind us. As the article explained, smog pollution induces and exacerbates asthma, especially for African Americans in urban heat islands, like Garner’s home in Staten Island, N.Y. But, No, I thought, We are not going to exploit Garner’s death to illuminate an environmental issue. Medical examiners ruled Garner’s death a homicide, strictly from the police officer’s chokehold — even accounting for the asthma — and that’s all that matters, I reckoned.

“Let’s be clear: Eric Garner was killed by a policeman not pollution,” I fumed on social media.

And then I got the learning. Eddie Bautista, the longtime environmental justice advocate and director of the New York City Environmental Justice Alliance, was quoted in the article saying about Garner’s death, “There are [a] number of ways that racism plays out … The asthma is just one more example.”

I thought the article used a poor occasion to illuminate racial asthma disparities. Bautista explained the larger context to me, though, saying, “The [article] doesn’t take the cops off the hook; on the contrary, it further indicts institutionalized racism in the U.S. for permeating the very air we breathe.”

I initially resisted this notion, refusing to see the connection. In my mind, there was the cop killing Garner in one hand, and Garner’s asthma in another — unrelated. And despite the millions of words I’ve spent over the years showing natural linkage between environmental problems, health problems, and racial justice, my anger with the Garner tragedy only allowed me to realize the police racism and violence. Just because I couldn’t see, or refused to see, the asthma link, though, did not mean it didn’t matter.

“Limiting the conversation about racism to just about how we’re policed is a lost opportunity,” Bautista wrote to me. “Folks should care not only about how racism kills quickly (via the police), but how racism also kills slowly and insidiously. ”

Bautista is right. I knew this, but I needed to be reminded. And this reminder served me well as I tried reconciling hard feelings arisen when the Sierra Club and the Pesticide Action Network (PAN) decided to publicly support the #BlackLivesMatter movement. (350.org and Greenpeace have also put out statements of solidarity.) Some of the organizations’ followers did not take kindly to this endorsement. 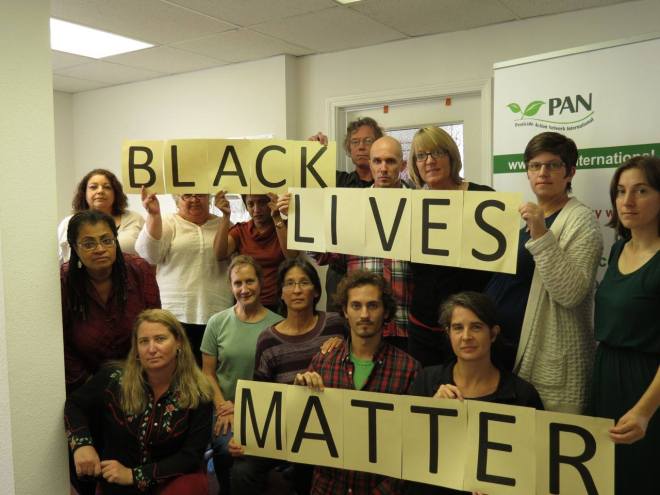 “Race and police misconduct are issues for our country,” wrote one person to the Sierra Club when the organization made the same stand on its Facebook page. “However, in my opinion, melding the environmental movement with decidedly unrelated social issues does not further our mission. It serves to marginalize the environmental movement as just another liberal cause, and reduces the audience that would be receptive to our message.”

To be fair, and to the environmental movement’s credit, there have been far more comments in support of PAN and Sierra Club than against. That support is necessary given the movement’s reputation as some albedo island that’s too easily given to deflecting rather than absorbing the warmth of other suns and causes. That rep would disappoint early conservationists like John Muir and Henry David Thoreau, who believed in the interconnectivity of nature with social matters.

I’ve been saddened, however, from reading people chastise PAN and Sierra for aligning with “thugs” and “criminals,” in reference to Garner and Michael Brown. The comments come from people who sound like they can’t make any human connection with those who’ve made mistakes in life; mistakes like Garner’s selling cigarettes, or Brown’s walking in the streets. I should feel maddened by this, but I’m too engulfed in the pain and stress of these events and my own health condition to take on more inflammation. And yet the sadness hurts anyway.

Many will continue to refuse to connect green issues to black bodies and red blood spilled in the street. Many others will continue to ignore the festering sores of racism, police brutality, and the ongoing vestiges of white supremacy. Ignorant or not, those issues will still grow, and when they do, they’ll touch nerves and cause deeper pains for everyone. Metastasis sets in irrespective of its acknowledgment.

It’s hard enough getting people’s attention on issues like climate change when the city is burning up from record-high temperatures. It’s even more difficult to grab their attention when the city burns in riots.

But really, even if on some dialectic plane, the deaths of Eric Garner, Michael Brown, Trayvon Martin, and the many other acts of racialized violence, real and perceived, are completely dis-attached from environmental issues — black lives will still matter. Please allow my own life as the analogy: I can’t feel this tumor, or whatever it is, in my chest, but I do still feel the throbbing ache in my back. The two problems may be unconnected. But resolving my spinal pain won’t matter much if I let this thing in my chest take hold of my heart.

Correction: This post originally stated that Rep. Peter King was a Democrat; in fact, he is a Republican.