At the Amundsen-Scott South Pole Station, a remote Antarctic outpost centered over the one spot on Earth where every direction you point is north, food is a Really Big Deal.

The U.S. research station stands on large cylindrical stilts over roughly two miles of ice and snow — so high that water boils below 200 degrees Fahrenheit, threatening the texture of even the most basic mac & cheese. But the kitchen staff prides itself on the morale-building quality of their food, from pasta made perfectly al dente to fresh-baked cookies, altitude and isolation be damned — and the art is not lost on the 150-odd people who live on station for the peak austral summer season.

No wonder T.J. Fudge knew the right pick-up line for the galley-full of after-dinner minglers, more committed to their ice cream than the evening lecture he  was about to deliver: “I make a mean fudge.”

Fudge is in his mid-thirties, and aside from making a fudge so good the recipe is given only to those graced with the Fudge surname, he works as a post-doctoral researcher in the Department of Earth and Space Sciences at the University of Washington in Seattle. (When I asked if I could call him Dr. Fudge, he said no — that’s his wife.)

The project will eventually excavate the deepest ice core ever drilled at the South Pole, and give us more context for our climate history. Fudge and his colleague, Mindy Nicewonger, a PhD student in Earth System Science at the University of California, Irvine, explained the project to me over beers in the galley on a slow afternoon, while waiting for better weather.

Their group is studying ultra trace gases (the technical term for gases that are really, really rare in the atmosphere) as they are preserved in the layers of ice at the South Pole.

Ultra trace gases may be harder to study than your average atmospheric gas, but they’re potentially very useful in refining our understanding of nuances in our planet’s past climate. While scientists know that the globe is warming on average, it is much harder to agree on how that will play out in specific regions of the world. Studying these trace gases can start to unlock some of these processes.

The problem with carbon dioxide and methane, the gases most commonly used to study climate change, is that they come from so many different natural processes, which makes it hard to pinpoint their sources. Trace gases like ethane and carbonyl sulfide (COS), by contrast, have much simpler life histories.

Nicewonger studies ethane, a close relative of methane, which is linked to wildfire in the pre-industrial climate (though today the major source of ethane is natural gas combustion), and may hold clues to the past variability of methane.

And COS is linked to plant growth, as Murat Aydin, the lead Principal Investigator for SPICE Core, explained to me. Levels of COS might be able to give scientists a hint about how reforestation progressed as land emerged after the last glacial maximum.

All of this, in turn, may help us understand how ecosystems would respond to climate change in the future.

“It’s not enough to just understand the big players,” Fudge said. “You have to understand what drives them.”

It’s like a football game, he said: “If you just got the score of the Seattle-Green Bay game, you still don’t know what happened.” You need the full play-by-play. 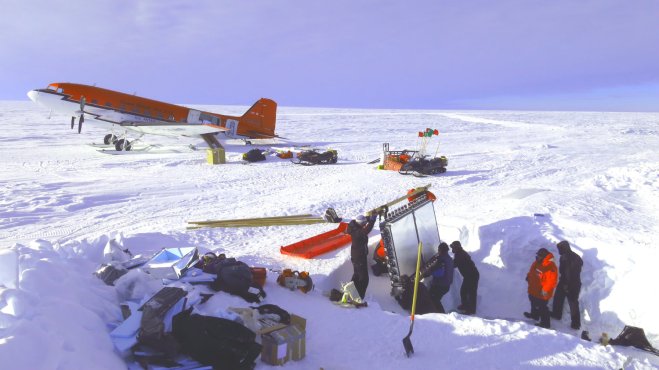 It was on a stopover at South Pole, waiting to fly back to McMurdo Station (another U.S. Antarctic research station) that I met Fudge and Nicewonger.

I came to Antarctica to fill a mountaineer and field safety position on a small team tasked with recovering a stranded instrument. Ironically, the only mountains we saw were from the ski-equipped planes that took us to and from our remote field camp, where we spent over a month digging out a cosmic ray detector and grooming a landing strip so a bigger plane could pick us (and our tons of gear) up. It was a lot of work to complete one simple task — but that’s pretty standard.

For all the glory of traveling to the South Pole, the reality of such meticulous science is days upon days of cold, slow, and tedious work. The SPICE Core drill works at about two meters per hour, and is housed in a big tent maintained well below freezing, because the temperature of the ice cannot go above -20C — all the way to its destinations in the United States.

Fudge and Nicewonger are here for the unique combination of cold temperatures and relatively high snowfall, which helps to preserve these volatile trace gases in the ice (Antarctica is technically a desert, but the South Pole sees precipitation two to three times higher than elsewhere on the continent). But their decision to live and work at the South Pole also has a lot to do with their own experiences with the power and grandeur of the planet’s natural forces.

For Fudge, it was a mountaineering course in Washington that turned him on to extreme climate science:

“Glaciers had all of the geologic processes happening,” he said, “but on timescales of years rather than millions of years.”

And Nicewonger lived through Hurricane Ike as a high schooler in Galveston, Texas. “I was amazed at how the sky could wreak so much havoc,” she said, “and at the power and energy that the atmosphere contained.”

Soon after Ike, in a blurb announcing the top 10 graduates from her high school, Nicewonger listed her goals: “Work for NASA or the national government, become a tornado chaser, and one day go to Antarctica to study the climate and weather of the world.” 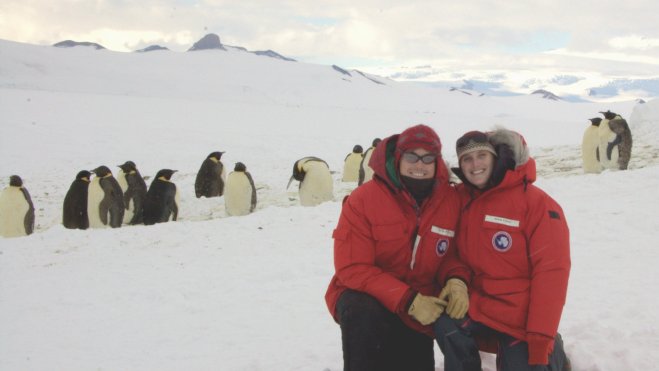 The Dr. and Mr. Fudge. And some penguins. T J Fudge

Ice cores are a lot like tree rings, where visible stripes depict the seasons. A thicker band indicates more annual snowfall, and sulfur compounds turn up from summer plant and animal activity in the (relatively) nearby ocean.

Ice, however, changes over time, complicating these basic principles: Those annual layers are stretched out by the flowing of the ice – it’s like a ball of silly putty being slowly pulled apart, Fudge said. Older layers are thinned out, such that most of the time, geologically speaking, fits into less vertical space the farther down in the ice core you look. 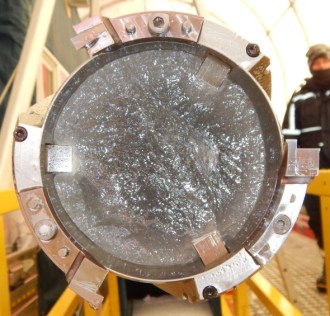 By the time I got to the station, the SPICE Core team had drilled down 736 meters, extracting an ice core containing roughly 10,000 years of climate history, and capturing the geological epoch that encompasses the rapid growth of the human species. Next year, they will drill to 1,500 meters, doubling the depth but quadrupling the time frame (back to about 40,000 years), and capturing the Last Glacial Maximum at about 20,000 years before present.

Looking into the past is not a perfect analog, but it helps us understand how ecosystems respond to climate change.

“The best experiment we have is what happened in the past,” Aydin told me.

Or, as Fudge pointed out, showered and well-fed and sipping a beer on the Harsh Continent, first you need to know what is natural. “If you understand how a system has worked in the past, you have a better ability to predict the future.

“That may be a simple view,” he said. “But maybe it is that simple.”