One of my first stories of 2014 was an interview with Reginald Parker, an African-American entrepreneur with a chemical engineering Ph.D. from MIT who was preparing to build one of the largest solar farms in the country. He broke ground on the project in September, in North Carolina, near an area where his relatives once picked cotton. Upon completion next year, it will cover 100 acres, and will produce 20 megawatts of electricity. Best of all, much of the profits will go to African-American farmers and “socially disadvantaged rural businesses” in the area.

This is all good, but when Parker recently spoke with a reporter from GreenTechMedia about it, he couldn’t help but note the isolation he feels: “Women and minorities get locked out of [the solar industry] even before they know there’s a chance to get in,” he told GreenTechMedia’s Julia Pyper.

Parker is far from alone in believing this. Black politicians and chamber-of-commerce heads are also aware of this, and may even be figuring this into their decisions to help slow, if not halt, the solar industry’s expansion. That’s not a good look when fossil fuel-fueled, investor-owned utility companies are currently trying to do exactly that. The numbers behind Parker’s premonition don’t help matters.

African Americans make up 12 percent of the U.S. labor force, according to the U.S. Bureau of Labor Statistics, yet in 2013, they constituted just 5.9 percent of the solar workforce, according to a report from the Solar Foundation — the smallest proportion of any racial group. In contrast, Asian Americans and Latinos have a stake in the industry — 15.6 percent and 6.7 percent, respectively — that is roughly equivalent to their proportion of the overall population. 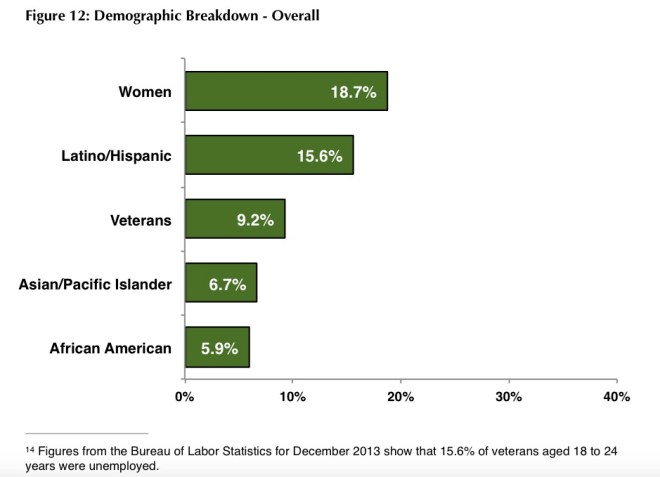 Such underrepresentation for African Americans is on par with the general energy workforce, where black workers have made up less than 2 percent of laborers since the early 1980s, as reported by the American Association of Blacks in Energy. In 2009, the group reports African Americans gained just .01 percent of the revenue from the energy industry, despite spending over $41 billion on energy that year. Which is why the NAACP’s “Just Energy Policies” report last year concluded that “there is both inequity in the incidence of disease and the economic burden for communities of color that host energy production facilities.”

I’ve gone hard on black officials who’ve been stunting solar progress, but given the dismal figures above, it’s not difficult to see why some haven’t exactly been sunny side up for the industry. Many of those officials are collecting handsomely from fossil fuel companies to block solar, and have been for a long time — that can’t be ignored. But it can’t be discounted that some might truly be concerned about whether African Americans are obtaining equitable opportunities in the emerging green markets.

The racial imbalance certainly hasn’t helped in the fight over solar net metering policies, which provide incentives for people to put solar panels on their roofs. Last month, the Wisconsin Public Service Commission approved a 75 percent increase in monthly fixed charges, predicated by a phony campaign run by utility lobbyists who gamed the commissioners into believing that net-metering policies, would are burdening poor, families of color. The Florida Public Service Commission followed up this month by voting to roll back net-metering rebates under the same faulty pretense.

John Marks, former chair of Florida’s utility commission and former mayor of Tallahassee, applauded this rollback in an op-ed:

Those that have enough money to invest in renewable energy programs like solar, get all sorts of breaks through rebates, tax credits, and savings on their energy bills. In contrast, people who cannot afford to have solar receive higher energy bills because the beneficiaries of current net metering policies pay nothing or, at most, make a modest contribution toward the costs of operating and maintaining the grid and other non energy utility operations.

Marks, an African American, has a specious argument, at best, here, given that there are plenty of reports showing that net metering provides net benefits for households of all classes. Residential solar installation costs have dropped 43 percent between 2007 and 2012, making it increasingly more affordable for low-income households. Yet, Marks’ position is shared by people like former Florida state Rep. Joe Gibbons, the chair of National Black Caucus of State Legislators’ energy, transportation, and environment committee.

Fortunately, it’s not a one-sided debate. Ennis Leon Jacobs, who’s also a former chair of the Florida Public Service Commission, and who is black, has tried to push back against people like Marks with the latest science on solar. In a recent op-ed, he wrote:

I join Mr. Marks in seeking the very best opportunities for all electric customers to lower their utility bill and when studies have been conducted in a robust and transparent manner, we’ve seen that net metering provides benefits, not costs, to all ratepayers. … Portraying low-income customers as victims of energy efficiency programs and policies that advance solar power is misguided and disingenuous and holds all Floridians back.

But here’s the problem: The lack of racial parity in solar economic benefits makes it more difficult for Jacobs to do this kind of pushing back. “It’s a horror show,” said Jacobs when I asked him about the climate for black enterprisers in the solar sector in Florida. “African-American entrepreneurs had little chance to get in that mix.”

It’s not just in Florida. It’s been tough digesting the California Black Chamber of Commerce’s (CBCC) opposition this year to not only net-metering policies, but also the Obama administration’s clean power plans, especially in a state where there are, perhaps, the most progressive green policies. But looking more closely at the CBCC’s stances, I’ve found that they are less about clean energy in principle, and more about racial equity.

I spoke recently with Leonard Robinson, chair of CBCC’s energy & environment committee, and who once led a radio show in California called “Green and Sexy” about it. He now lives in Maryland, where he runs his own consulting firm called Envirobro LLC. Despite the CBCC’s anti-solar words, Robinson says he’s still “a big proponent of renewable power,” as are the CBCC’s members. But they’re concerned about the utility bills of low-income people being “leveraged” against solar interests, and are fearful that people of color could end up bearing the brunt of higher energy costs. He’s also concerned about African Americans’ “access” to the solar business market.

“When this green economy was just beginning to move forward, a lot of communities of color especially black ones, just weren’t as informed as other communities,” said Robinson. White business owners got the jump on how to break into the market, but failed to spread the word. “Information is a two-way street, and you have to give and receive.”

Simeon Gant, president of the Sacramento-based organization Green Tech, which helps prepare black and Latino youth for green jobs, echoed these sentiments. He’s been disappointed a few times in trying to get green companies to take his students in, which would not be as much of a problem if there were more black-owned solar companies. “African Americans in California are not involved in the solar industry,” Gant told me. “We have a few here and there, but generally we don’t have black companies fully engaged in the solar industry.”

In the mid-1970s, grassroots leaders and business owners of color created the Greenlining Coalition to address fairness and equity in California’s plush business landscape. “Instead of different groups fighting for slices of a too-small pie, our coalition works together to increase the size of the pie for everyone,” the group’s history reads. The CBCC is part of that coalition, which in 1993 gave birth to the Greenlining Institute, “a policy, research, organizing, and leadership institute working for racial and economic justice.” And yet the Institute is not in total alignment with the CBCC on issues around expanding solar.

Vien Troung, director of Greenlining Institute’s Environmental Equity program, says the Institute’s leadership understands CBCC’s concerns and doesn’t want to see an “eco-divide” where white people are the only people benefiting from green policies and profits. However, “we also don’t want to slow down the move to renewable energy,” said Truong.

There are a number of new California policies in place that seek to address the equity issue on clean energy, many of which are spelled out in Truong’s recent blog post, “California’s Smart Climate Policies Righting Historic Wrongs in Oakland.” The Institute also launched a new website this month called UpliftCA.org, which shares information on how people of color and low-income can benefit from these policies, including stories of families who already have.

There are some encouraging signs. According to the Greenlining Institute’s Supplier Diversity Report Card, minority business enterprise contracts increased $674 million between 2012 and 2013. But it also reports that major companies have decreased spending contracts with both African-American companies, and plateaued spending with Asian American companies, which the report says “raise(s) concerns about the future of these areas.”

To address those concerns, Truong says business leaders, especially those controlling the markets, need to come to the table with policymakers and small business owners. “Let’s work together,” Truong says. “We have some solutions and we want to make sure they are as effective as possible. This supplier diversity is just one way we make sure that more opportunities go to minority entrepreneurs, but let’s come together and look to see where we can create even more success.”

Absent more success in the new year, green companies and organizations can probably expect to find rising opposition to progressive solar policies. Black business leaders have reason to sit out fights over expanding the solar industry if they don’t see themselves reflected in it to begin with.