Asking for peace and ignoring history in Ferguson 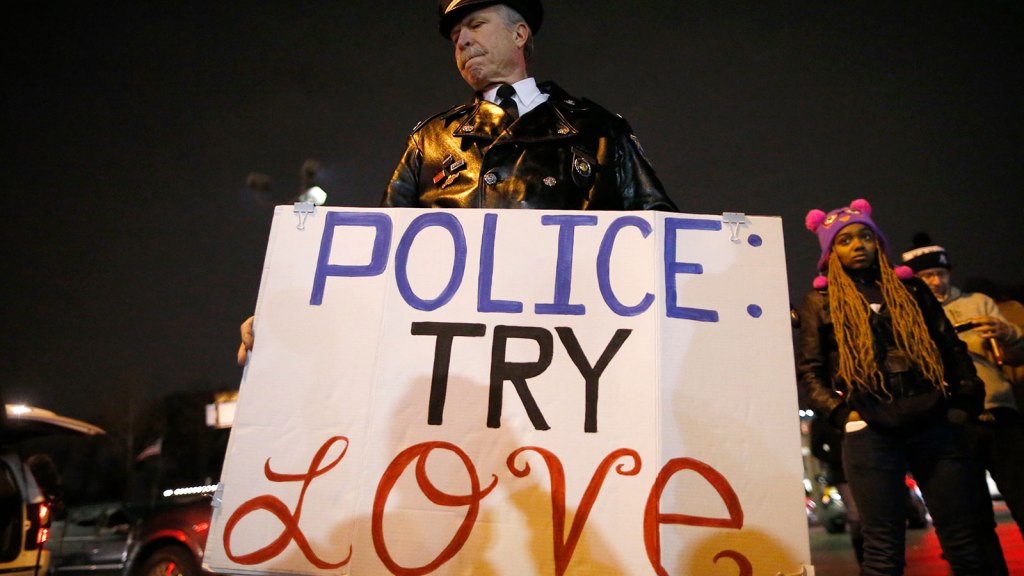 Asking for peace and ignoring history in Ferguson

There are few words that would do any justice in explaining what exactly happened last night, how things fell apart. The grand jury’s decision not to indict Ferguson, Mo., police officer Darren Wilson for killing 18-year-old Michael Brown was an unfortunately likely, if not inevitable, outcome. Grand juries return indictments in almost 99 percent of cases like these, except when the killer is a police officer, as Ben Casselman and Reuben Fischer-Baum report at FiveThirtyEight.com.

I’m not up for arguing over what happened between Brown and Wilson during their “struggle,” or whether Brown deserved multiple bullets to the body and head as some moral consequence. As I’ve pointed out before, the preeminent factor here, at least for me, is that a young, promising life was cut far too short, and his parents must now live with the anguish of their son’s death while his killer walks freely. Perhaps Brown’s parents will later be compensated through a civil suit, which they surely deserve, and the Justice Department still has two investigations pending, including one on whether Ferguson police violated Brown’s civil rights. But none of this will bring their son back.

Before passing judgment on Brown’s pre-murder behavior or on the post-grand jury riots, I recommend watching the video below, captured by Rebel Pundit, showing Brown’s mother after hearing that Wilson would not be indicted. It’s not a completely “clean” reel. You’ll hear language perhaps too profane to play out loud at your work desk. You’ll see tender moments, like when people from the crowd step up to embrace her, her frame enveloped in a comforting, smothering of love. But you’ll also see and hear uncomfortable elements, like the cries to “burn it down,” and the redness in the eyes of the people — not all rage — crying it.

What happens after the video is what you’ve seen on TV newscasts, newspaper pics, social media photos, and Vines across the board: assaulted police cars, burning buildings, burning American flags, gun shots, tear gas, and just tears — all part of a riot that could not have been quieted.

I don’t doubt that most parties in Ferguson want peace. Civil rights organizations have been training people in Ferguson on non-violent protest for weeks. Pleas for peaceful resolve were made far in advance from mayors, the Missouri governor, Attorney General Eric Holder, and President Obama, even as law enforcement stocked up with personnel and artillery in clear anticipation of bedlam. Brown’s own parents asked for a peaceful response in a written statement in advance of the verdict.

But when you hear Brown’s mother in the video belt out in between sobs — “Everybody want me to be calm. Do you know how them bullets hit my son? How they entered his body? What they did to his body?” — you can feel the internal struggle ripping her apart. She’s caught between the obligation to act in the spirit of disarmament and the human instinct of retribution for a slain child. I can’t promise you that I would have the wherewithal to remain calm, let alone calm the crowds around me if put in the same position. Nor would many of us.

The issue here is not whether the peaceful or non-peaceful response is the correct one. It’s more that when it comes to interactions between police and citizens, too often it is African Americans who are punished under a presumption of malice and aggression, while others are given the benefit of the doubt. I can point to thousands of cases of this, especially during the lynching era, or during post-Reconstruction when entire African-American-built towns were burned to the ground by angry whites in badges, when not those in white hoods, over the pettiest misunderstandings of black behavior. White Mississippians took the law into their own hands when they tortured and killed 14-year-old Emmett Till roughly 60 years ago, and yet not a single one of his killers was punished.

But I don’t need to go that far back in history. Just a few months ago, in downtown Seattle, 25-year-old Raymond Wilford, was maced and apprehended by a security guard and then taken into custody by police for pump-faking a swing at a white man who got in his face while heckling protestors. Dozens of photos and videos show that the white heckler was the chief aggressor. He had been acting obnoxiously throughout an otherwise peaceful protest, and yet he was never a person of interest for the security and police. Wilford, meanwhile, was on the scene for just minutes, and not even as a protestor — he was just passing through — and yet he was the one who was pepper-sprayed, handcuffed, and led off by police. This happened while multiple witnesses tried to explain to the officers that it was the white heckler, not Wilford, who was the clear threat. “You have the wrong guy,” witnesses shouted at the police.

It’s for these reasons that negotiating peace when police are involved will always be a tenuous thing for many African Americans, because history does not support the idea that black people will come out of it unscathed or unassailed. Refer to any black protest organized for nonviolence leading up to and including Freedom Summer, and in many cases after, if you don’t believe me. The promise of peace barely held together even during Freedom Summer, despite it being upheld as the apotheosis of nonviolent protest. Joyce Ladner, a leading architect of Freedom Summer, explained this to me when I interviewed her earlier this year.

“[The Student Nonviolent Coordinating Committee] members weren’t necessarily believers in nonviolence,” said Ladner. “It was a philosophy we subscribed to, but whether or not people believed in it fully in their hearts is another thing. As time passed, a lot of people didn’t believe in it, but they still practiced it. And we had to, because when you saw that [the police] had all the guns, it could have been a bloodbath for us.”

If African Americans were slaughtered and jailed while unarmed in their Sunday’s Best then there’s no mystery why many can’t promise peaceful restraint. It’s perhaps because of the expectation of peace imposed on black citizens — the obligation to suppress human urges while the deputized are allowed to mount up — that many African Americans withdraw from protests altogether. I remember speaking with an advocate about protests at the White House against the Keystone XL pipeline. When I asked why this activist, who is African-American, didn’t attend, I got this response: “Yeah right, I’m not going down there so I can get my head beat and put in jail. I have work tomorrow.”

That’s not a chicken-out response. That’s someone who knows their history. And while there were plenty of people in Freedom Summer who also risked jobs, homes, and more to protest, what does it say about our nation that we expect the same sacrifices to continue to be made decades later? Many have taken glory in the diversity of the People’s Climate March. Had it not been so acutely organized, controlled, contained, licensed, and choreographed, we may have seen a much whiter picture.

So, if it’s difficult to get people of color to the demonstrations, for fear of being singled out by police for punishment, then what’s left? There’s voting, our last effective franchise. But then, when we see financial contributions impacting elections — along with gerrymandering and dog-whistled legislation around voter fraud hype — what resort does one have left?

It’s a shame that our first requests and largest concerns are focused on demands of docility from people who, since the birth of our nation, have more often been the subjects, not the initiators, of violence. “Shame” is actually too weak of a word to describe it. It’s not shame when the president of the United States is leading the charge. It’s actually rather criminal that our first urge is to mandate calmness out of Brown’s mother and her supporters at a time like this. Do you know what those bullets did to her son’s body?