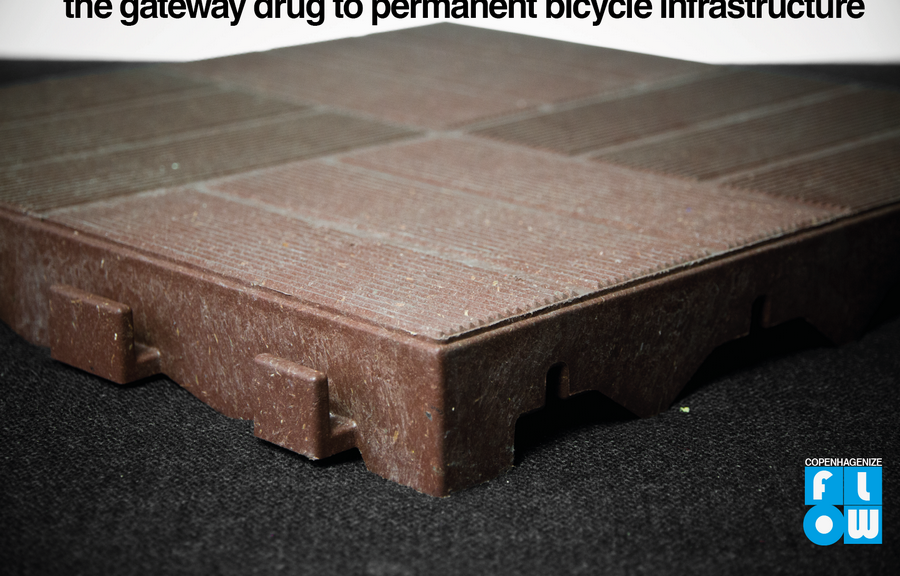 Making a shitty bike lane isn’t necessarily a big commitment — just slap down some paint, and you’re good. But making a safe, separated bike lane requires a little more investment. So the Copenhagenize Design Company has come up with a system that it’s calling “the gateway drug to permanent bicycle infrastructure,” or “The Copenhagenize Flow.”

It’s a pretty simple idea, actually: a system of tiles that click together, LEGO-style, to make a temporary, raised bike lane … wherever. There are ramps to get cyclists on and off the raised track, and the tiles themselves are made of recycled plastic and wood. City designers can buy a set, lay down a bike lane, and test it out. If it works, great — invest in making an actual lane. If not, it can be gone the next day. Either way, you can then reuse the tiles and try them somewhere else. It’s sort of like having a Sim City-like tool where you can put down squares of infrastructure with the click of a button, and then take it away just as easily.

Hopefully, this will at least cause more cities to lay down temporary bike lanes to try them out — and if we’re judging by how long “temporary” scaffolding lasts in New York, we may have them for a good long while.

[Update: We’ve been contacted by the creators of Bikway, an infrastructure company that offers “urban consulting to engineering and on-ground implementation,” who say that they have been working on a similar project for a couple of years and after they met with Copenhagenize, the company “decided to run away with our idea and product.” Among other work, Bikway is currently raising money for modular bike lanes. You can compare the two projects for yourself.]