The basics: A girl genius who just doesn’t want the world to stop dreaming, Casey Newton (Britt Robertson) gets caught trying to sabotage the shutdown of NASA’s Cape Canaveral launch site. After her NASA engineer dad (wait, this sounds familiar) bails her out of jail, she collects her things and stumbles upon a mysterious pin that can transport her to the futuristic utopia of Tomorrowland. After the pin stops working, Newton learns that the only way to get back to Tomorrowland is to enlist the help of grumpy old George Clooney (George Clooney), hardly playing science prodigy Frank Walker. Walker was exiled from Tomorrowland long ago and is pretty bitter about it, but when he realizes that Newton could help fix what he did, the three of them team up and hijinks ensue.

Why it’s green: Tomorrowland should piss off anyone who thinks there’s still anything worth saving in this world, because it implies that depressing old Todayland has completely gone to shit and no one’s doing anything about it. This is less an invigorating call to action than an insult. The film opens with a montage of Newton’s teachers lecturing their classes on all the poverty, wars, environmental destruction, etc. going on around the world, and when an overeager Newton asks what people are doing to fix things, there’s nothing to say. The message seems to be: If it’s too broke, don’t fix it — build a new one.

Grab a cup of coffee and get comfortable, because for a movie that’s surprisingly low on substance, there’s actually a lot to unpack here. First thing’s first: What is Tomorrowland?

The brainchild of Nicola Tesla, Gustave Eiffel, Thomas Edison, and Jules Verne, Tomorrowland is a parallel world where the best and brightest go to follow their dreams and build the beautiful utopia that we’ll never have in this lowly dimension because, I don’t know, all of us regular people are in the way or something. And the only way to get there is through an invitation in the form of one of those pins– it’s very exclusive.

Like many things in this movie, it’s not clear what the long-term plans are for Tomorrowland. Will it eventually open its doors to the rest of humanity? Will it lend some of its fancy futuristic technologies to this sad and dying world? Will the residents of Tomorrowland just let the plebes die off and start their own superspecies? Who knows, and who cares! All that matters in Tomorrowland is that the best among us get to live and play in the utopia they deserve. Tomorrowland is the high-tech charter school up the block to Todayland’s underfunded and overworked public school. 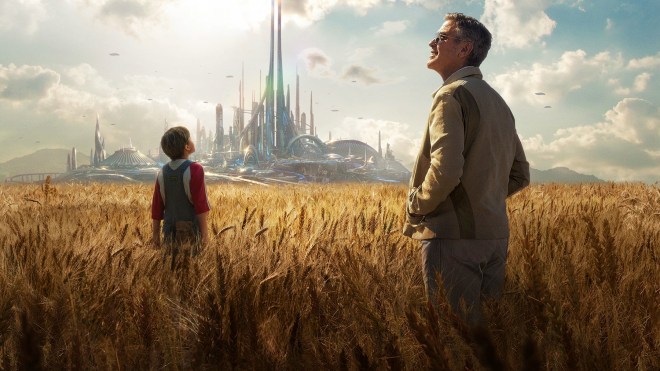 But as far as high-tech wonder goes, Tomorrowland is a bit of a Monet: From afar, it looks like the Emerald City from The Wizard of Oz, which — admittedly — is a pretty cool skyline. But zoom in, and the city turns out to be pretty underwhelming — especially given that it’s supposed to be the most incredible place ever. The biggest difference between Tomorrowland and Todayhell is that everything in Tomorrowland seems to fly — which is pretty sick, but also not that original. After airborne transit, the second most ubiquitous tech in Tomorrowland is touchscreens, but frankly: yawn.

The geniuses of Tomorrowland do, however, deserve some props. Interdimensional travel and the ability to see into the past and future are probably most impressive, but there are also these giant, humanoid 3D printers, essentially, that can construct large pieces of infrastructure in seconds. And while they might not be as sexy, these robots seem like they’d be incredibly useful — especially in a lesser dimension full of old and decrepit infrastructure (hint, hint!)

Barring a few standout features, the day-t0-day lives of Tomorrowlanders don’t seem that much better than ours — at least where tech is concerned. (I mean, have you taken stock of what kind of technology we have at our fingertips these days? It’s pretty insane.) Tomorrowland is incredible for an entirely different reason: Everyone there seems equal, prosperous, and happy, which, if anything, is what makes it the utopia it so desperately wants to be.

A lot of hype around Tomorrowland has focused on the film’s optimism — look at this happy, perfect future we could have! But really, this movie is just as dystopian as all the other gloom and doom stories that our culture has been obsessed with in recent years — moreso, in fact, because in Tomorrowland there’s no fight of good vs. evil. Instead, humanity is just divided into two: an elite society and everyone else. The idea that our only hope for a better world is building a whole new one is, well, depressing as hell, because that other world ain’t gonna happen.

Tomorrowland fell short not only on basic plot development and gee-whiz tech, but also on portraying a strong female lead. As Forbes pointed out earlier this week, Tomorrowland is one of six female-driven box office movies out this weekend (it’s sad that we’re celebrating that.) But to be honest, Newton is no Furiosa. The whole sabotaging NASA thing was pretty badass, but that was by far the most impressive thing Newton did in the entire movie. She looked like a deer in headlights for the rest of it.

So should you see Tomorrowland? Eh. If you wait until it leaves theaters, then you can invite some friends over and turn it into a game. I suggest drinking every time Newton looks scared and/or confused, or whenever you see something that’s supposed to be super impressive but just … isn’t. And when it’s all over, you can take turns trying to fill in the plot holes. Here are some questions to get the conversation rolling: Why did Tomorrowland need fixing in the first place? What happened to the real world in the end? Does it matter? Should we all just give up and stop procreating? And how much more fun would life be, really, if we all had sick hoverboards?