The Leonardo DiCaprio Foundation has just donated $50,000 to ensure that Adrian Grenier gets to Kickstart his latest environmental passion project: 52: The Search for the Loneliest Whale. This documentary from Grenier and Josh Zeman will attempt to “re-find” a particular, very emo whale, which was first discovered by the U.S. Navy over 20 years ago. Said sad whale sings at a frequency no other whale can hear (52 hertz), so he’s the loneliest whale in the entire Pacific, which I guess is pretty dang bleak. (Unless he’s a loner by nature, in which case he finally has some goddamned peace and quiet. You never know.)

Grenier got involved “when a documentary producing partner called and asked if [he] wanted to participate.” That is perhaps less dramatic than what we’d hoped for, so allow us to submit this alternate brotacular origin story. It probably happened over many beers. 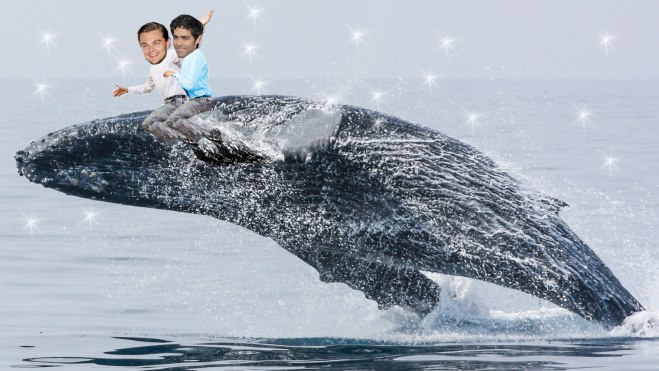 ADRIAN: No, we love the ENVIRONMENT, man!

ADRIAN: I also love The Wolf of Wall Street. You totally should’ve won.

LEO: Oh, thanks man. Entourage was pretty tight, for TV.

ADRIAN: … Um, thanks. Say, would you want to help me re-find this whale with literally no entourage? Y’know, since you love oceans and shit. Whales are all up in there. Just need about 50 Gs.

ADRIAN: OMG! Thanks, bro. Have another Church Key beer, on me. It’s kinda weird, I know, but someone made a phone call and asked if I wanted to participate and … you can see my problem. I’m just too passionate.

LEO: I totally know what you mean, dudebro.

ADRIAN: [Cheers.] So I guess now I can call you The Wolf of WHALE Street!

LEO: What did you just call me?

ADRIAN: The Wolf of Whale … like, because of the animal … the movie … we just talked —

We’re finding out what’s in fracking wastewater, and it ain’t pretty