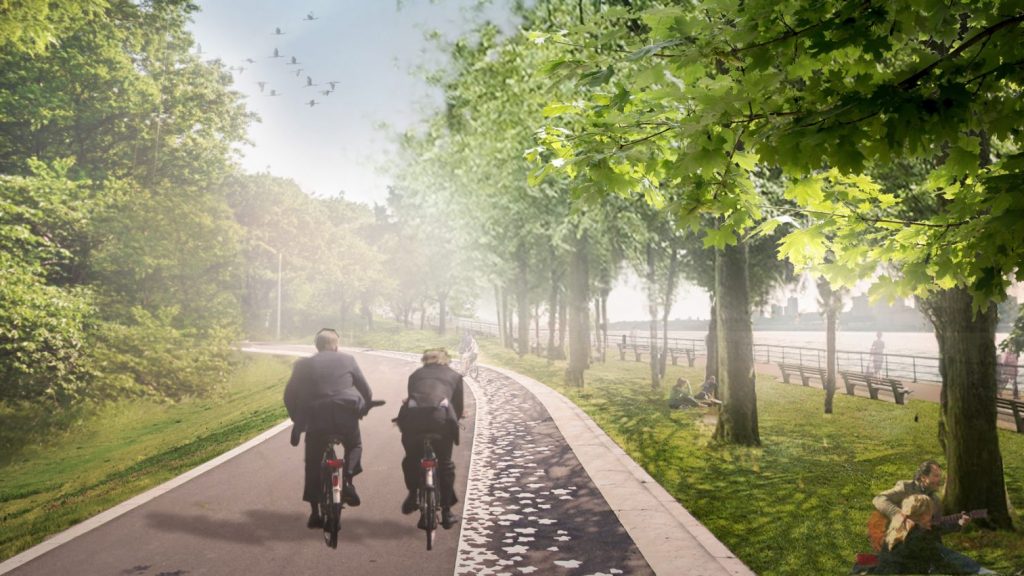 New York City is in trouble.

Location, population, and a massive underground infrastructure system: All this makes New York especially vulnerable to climate change. This was most starkly felt in the aftermath of Superstorm Sandy, when more than 88,000 buildings flooded, 250,000 vehicles were destroyed, and 44 people were killed. It’s cost $60 billion to rebuild damaged areas, much of which is being paid for by the federal government.

In an effort to stave off another Sandy, the city is prepared to wall off one of its wealthiest areas, Lower Manhattan, from massive storms and rising seas. Rolling Stone’s Jeff Goodell writes that New York will break ground later this year on the East Side Coastal Resiliency Project, a 10-foot-high reinforced wall that will run two miles along the East River.

The plan, called the Big U, is the brain child of Danish architecture firm Bjarke Ingels Group, which won a $930 million competition sponsored by the Department of Housing and Urban Development in 2014. Based on a video from the design firm, the $3 billion project looks more like a park than a wall. There is space for gardening, recreation, walking, and dining, and indoor and outdoor markets.

It is not, however, without critics. Urban planners told Goodell they doubt the final design will include any of the recreational spaces. It’s just too expensive. “When it’s done, it’s just going to be a big dumb wall,” one architect said. Plus, there is the wall’s location. While Wall Street might be safe from the storm, the wall could actually make flooding in neighboring Brooklyn worse.

Regardless, it will take more than a wall around Lower Manhattan to save New York residents and businesses. As Goodell notes, New York might prevent another Sandy, but not the worsening storms expected from climate change. The solution requires more than just a big wall; it requires comprehensive rethinking of government policy and infrastructure spending, and a new approach to combatting long-term threats.