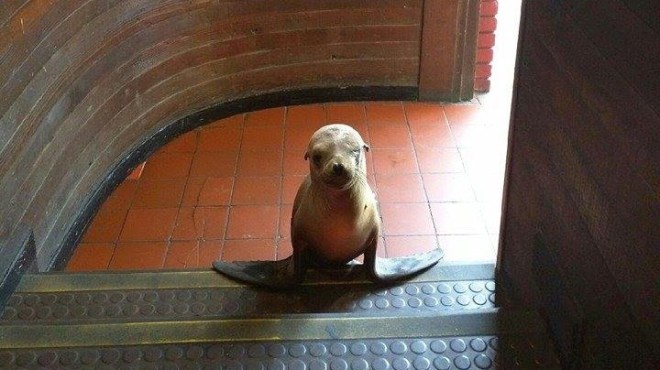 Sea lions have been driven out of the sea and onto city streets because their tasty sources of food — like anchovies and sardines — are being decimated by acidifying oceans. In San Francisco, for example, they’ve been wandering the streets starving and confused, but in Southern California (of course) they’re a little bolder.

Last week, a sea lion flopped onto dry land in Orange County, declared “ugh,” and, just like you, immediately headed to the nearest bar.

The pup wandered off the beach, through the parking lot and up the steps leading into Beach Ball just before 11 a.m. May 12, bar patrons said.

Sea lion sightings have become more common recently along Orange County beaches. More than 2,000 of the animals, most of them dehydrated and malnourished, have washed ashore this year in California, according to the National Oceanic and Atmospheric Administration.

The sea lion, in addition to being fucking hungry because humans ruined his home, has an eye infection which, in the perfect intersection of tragic and cute, makes him look like he’s winking all the time.

All jokes about sea lions and Hair of the Dogs (get it? Because pups!) aside, starving sea lions landing in Newport bars is really upsetting. And as if they didn’t have it bad enough, they might run into an evil surfer with a penchant for cocaine and murder!

Prepare to pay more for eggs