Imagine cleaning the ocean with your bathing suit. Sounds a little messy, right? Perhaps a tad impractical? But a design team from the University of California Riverside wants to do just that.

The team invented a highly porous material called Sponge, which is made from heated sucrose, a form of sugar. The material is “super hydrophobic, meaning it repels water, but also absorbs harmful contaminants,” according to a press release. Specifically, it can absorb up to 25 times its weight in the aforementioned “contaminants.” If that makes you squirm, fear not: The designers claim the bikini will trap the pollutants inside the material, so they won’t actually touch the wearer’s skin. 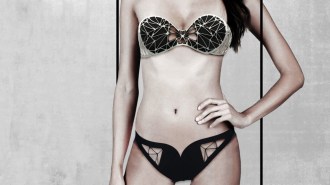 “This is a super material that is not harmful to the environment and very cost effective to produce,” said Mihri Ozkan, an electrical engineering professor at UC Riverside and part of the team that created Sponge.

Pinar Guvenc, Inanc Eray and Gonzalo Carbajo, partners at the architecture and design firm Eray Carbajo, had the idea to incorporate Sponge into clothing and helped design the initial swim suit mockup. They discovered a way to mold the material into the shape of a bikini by encapsulating it in a net made of 3D-printed rubber. …

The drawn in pollutants are released only when the material is heated at temperatures exceeding 1,000 degrees Celsius. The University of California team claims Sponge has proven effective for up to 20 uses, after which it is recommended that the fabric be replaced.

Now, even if this does work, it’s a little hard to imagine bikini-wearing swimmers will have much of an impact on the vast and polluted oceans of the world (couldn’t they at least commit to a tankini?). But, hey! Here’s hoping. Maybe next summer will be the year of the itsy bitsy teenie weenie ocean-cleaning bikini.