This nifty box can (illegally) turbo-charge your bikeshare cycle 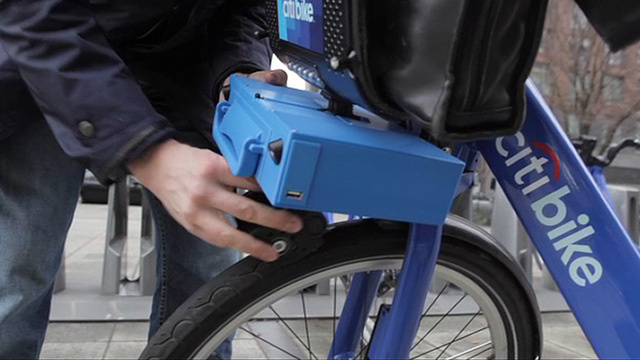 This nifty box can (illegally) turbo-charge your bikeshare cycle

Jeff Guida’s soon-to-be-Kickstarted ShareRoller is a hack for your local bikeshare — a briefcase-looking block that takes just a minute to attach to a bikeshare bike and that gives you an electric assist, up to 18 mph.

To interface with the bike, the ShareRoller uses a retractable powered wheel that relies on friction to drive the front tire. Acceleration is adjusted using a simple throttle control, temporarily mounted to the bike’s handlebars, that propels the bike at varying speeds when pushed, but automatically turns it off when released. And braking is, of course, handled by what the bike already has in place.

Two hours of charge will get you 12 miles of riding.

All of this is rad! There are just three problems. First, you have to carry this thing around, and it weighs seven pounds. So even if your legs get a break, your back and arms do not. Second, on Kickstarter, it’s going to cost $995, and at that point, you could just buy a lighter bike. Third, there’s the teeny tiny issue of it being illegal in some cities with bikeshares. In New York City, at least, electric bikes are verboten.

So, if you want to pay almost $1,000 to build your back muscles, risk getting a ticket, and go pretty fast on a bikeshare bike, this is the product for you.