In a time span of less than 40 years, America has gone from being a nation of farmers and secretaries to one of truck drivers and the occasional software developer. Yesterday, NPR released an interactive map of the most common job in every state from 1978 to 2014, based on data from the Census Bureau.

Here’s the map of the quaint, nationally heterogeneous late ’70s. In ’78, farmers dominated eight states, while the metropolises on the coasts bustled with busy-bee secretaries. And Hawaii, that number-crunching little island that we know all know and love, was thick with bookkeepers! This is an ideal way to imagine the U.S. economy — neatly divided into regional industry belts. Ah, the good ol’ days. 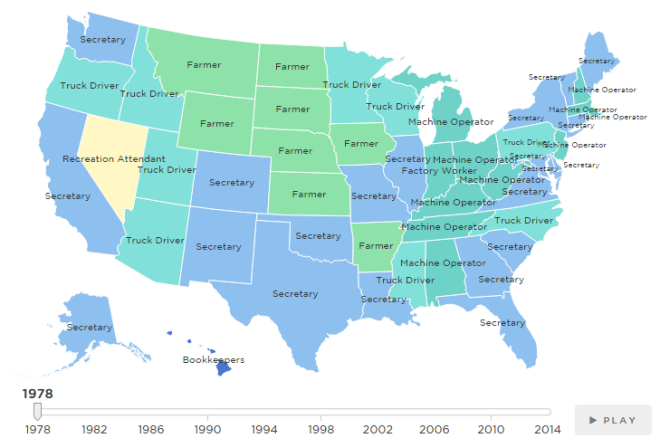 But jump 18 years later to 1996, and the job landscape is starkly homogenous. There was a significant drop in secretaries and a huge jump in truck drivers. 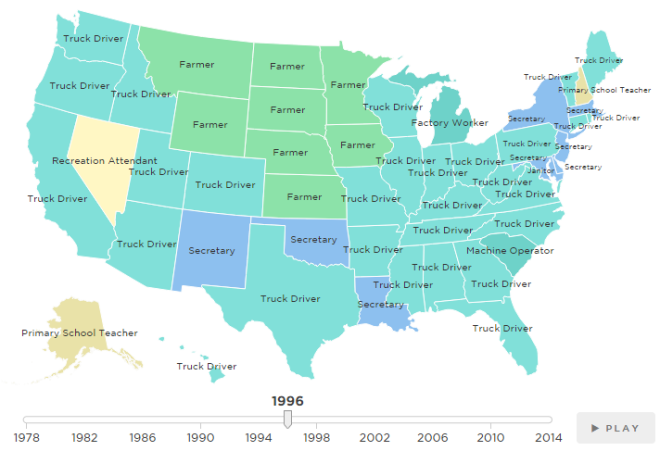 Zoom another 18 years to the (nearly) present day, and the digital age has begun to mix up the job market. Behold the rise of software developers. And beholdier: Truck drivers continue to command the national job market. Only two states remain with more farmers than any other profession. In less than 20 years, farming dropped as the No. 1 job in six out of the eight states previously dominated by ag. (Side note: Hawaii, per usual, continues to keep things interesting.) 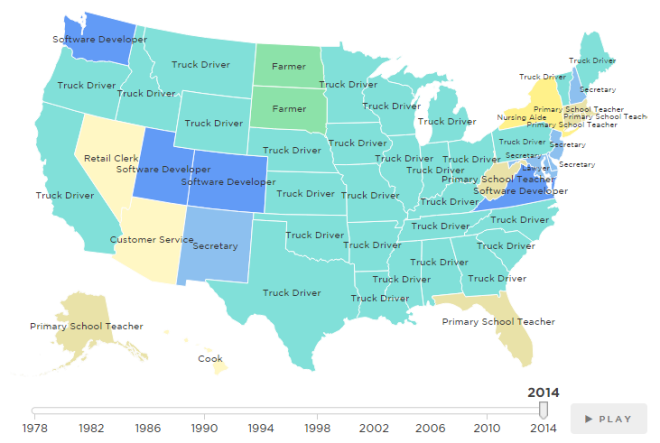 It doesn’t take too much noggin-tapping to figure out the problem here. As an industry, farming hasn’t shrunk. Almost everything about farming has grown exponentially since the adoption of factory farming in the 1920s. The rise of high-tech equipment, an increase in pesticide use, and the implementation of government-issued subsidies — all are larger than ever — except the number of farmers. With the help of ag technology, farms have become more specialized, gleaning tremendous production of commodity crops.

So what’s happening to all the farmers? As NPR put it, this longitudinal map shows “the tail end of a century-long trend” in the farming industry. Not only are farmers aging out, younger generations are finding new professions — like, y’know, maybe truck driving, software development, or moving to Hawaii to become a sous chef.

The 10 U.S. cities that are gentrifying the fastest