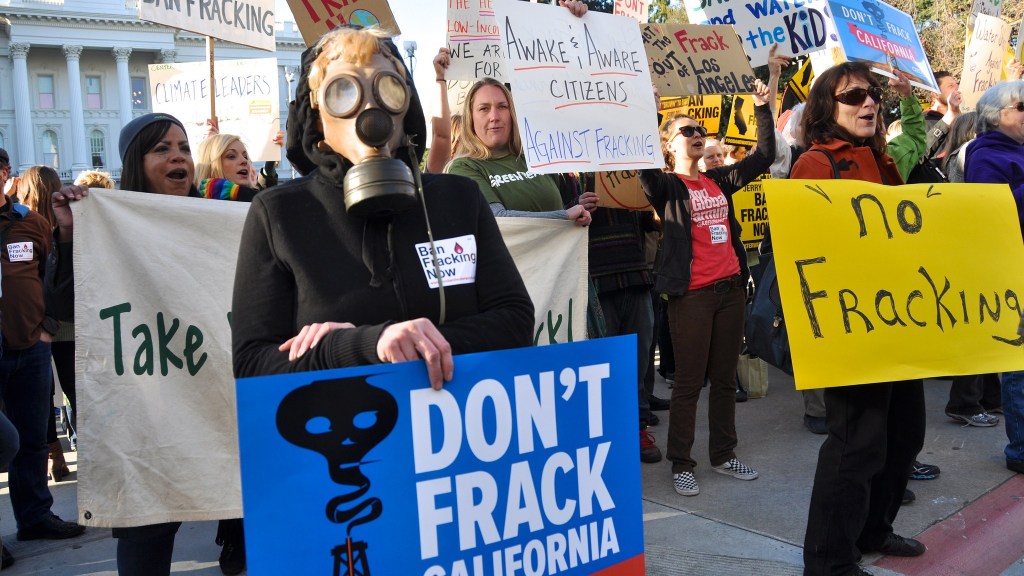 We're sure these protesters will be appeased. Brooke Anderson
Climate & Energy

Well, there you have it, ladies and gents: Fracking’s just fine! A study found no significant evidence to suggest that fracking and similar extraction techniques are harmful to the environment.

Energy companies poised to dig into California’s reserves are breathing a sigh of relief. The findings pave the way for the Bureau of Land Management to resume issuing oil and gas leases on federal land in California next year, following a temporary halt to the practice last year and the defeat of an attempted statewide moratorium on fracking this spring.

But here’s the catch: The study didn’t contain much information.

For example, the report found no evidence of water contamination from fracking in California, but the scientist directing the research, Jane Long, said researchers also had no data on the quality of water near fracking sites.

“We can only tell you what the data we could get says,” said Long, a former director at Lawrence Livermore National Laboratory. “We can’t tell you what we don’t know.”

Other unresolved issues, besides “the location, depth and quality of groundwater in oil- and gas-producing regions”: Any information about the toxicity of a third of the chemicals involved in fracking and whether or not plants or animals would be harmed by chronic exposure to those chemicals. Scientists behind the study had asked for more time, but the BLM had a seven-month timetable and wouldn’t budge.

BLM admits that this report doesn’t tell the whole story, and that — don’t worry — there will be more environmental impact studies done. They’ll just be done, you know, “as oil and gas development resumes.” Greeeeeeat.