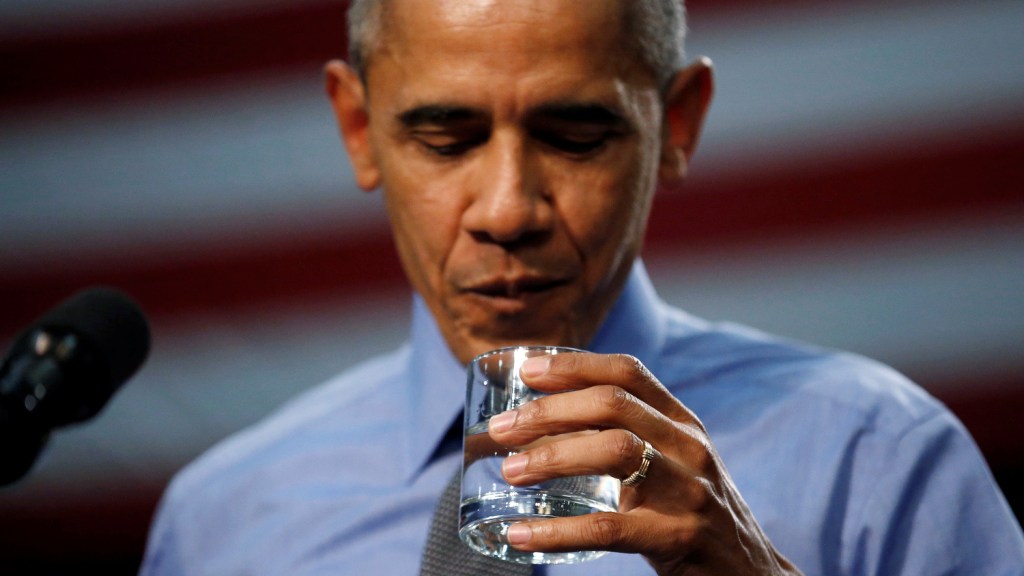 President Obama’s first visit to Flint, Michigan since declaring a state of emergency was heavy on the optics from the start. Flanked by Flint residents and Michigan Governor Rick Snyder, Obama worked to restore faith in a city that’s been totally betrayed by local, state, and federal levels of government over its water crisis.

The details of the trip appeared to be up in the air until the very last minute. Particularly the detail of whether Obama would drink the tap. The day before, staffers from Snyder’s office (who’s in the midst of a 30-day pledge to only drink Flint’s filtered tap water, in an effort to convince residents it’s safe) told the press he hoped Obama would drink from the tap while in town. Speaking from Air Force One this morning, White House Press Secretary Josh Earnest said it was “unclear” whether Obama would drink it.

In the end, the president tried the filtered water from the Flint public water system — twice.

“Generally, I haven’t been doing stunts, but here you go,” Obama said, taking a sip from a glass on a table after a meeting with federal officials at a food bank. “Filtered water is safe and it works.”

Later in the day, POTUS had a coughing fit during a speech at Northwestern High School and asked for another glass. This time it wasn’t a stunt. “I really did need a glass of water,” he insisted. “This is not a stunt.”

The trip was on the same day that the Michigan legislature appropriated an additional $128 million in aid for Flint, some of which will go towards replacing the city’s lead pipes — a process that could take another two years.

Flint residents aren’t letting local or state officials off the hook: One city and two state officials were recently hit with criminal charges. Governor Snyder — who says he can’t eat in a public restaurant these days without being heckled — was basically booed off the stage at Northwestern High School while introducing the President.

Speaking to a restless crowd of around 1,000 people at the high school, Obama did his damnedest to stay positive and constructive. He encouraged Flint residents to flush contaminants from their pipes by running the water in sinks in bathtubs, part of the “Flush for Flint” program — “not the most elegant title,” POTUS quipped, to some laughs. He also announced expanded Medicaid access for Flint residents though a state and federal collaboration, and strongly urged parents to get their kids checked.

But Obama also acknowledged the government’s failure to protect Flint. “This is a man-made crisis,” the President said.