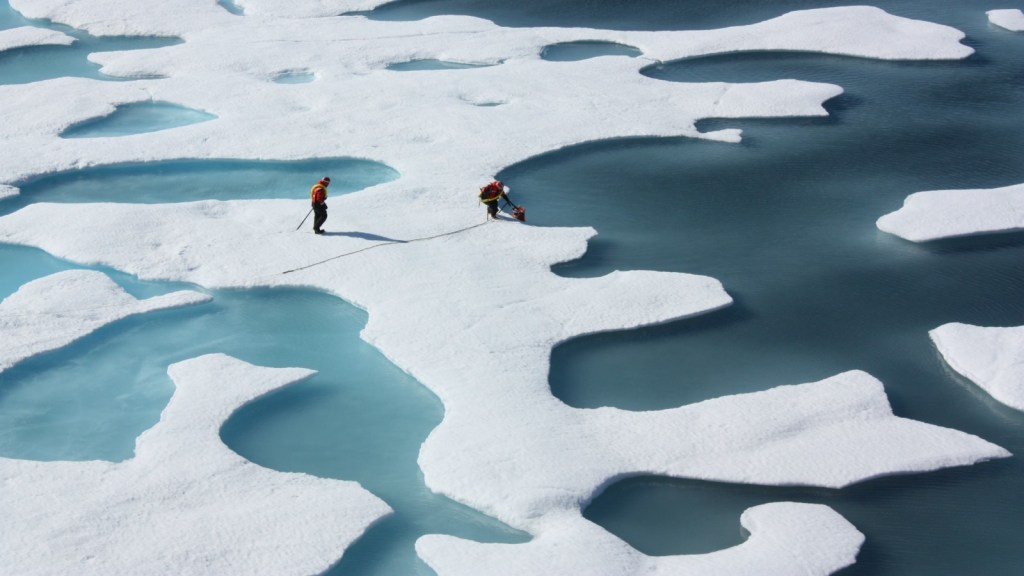 On April 13, coast guard officials from the U.S. and Canada will train for a cruise ship catastrophe: a mass rescue from a luxury liner on its maiden voyage through the remote and deathly cold waters between the Northwest Passage and the Bering Strait.

The prospect of just such a disaster occurring amid the uncharted waters and capricious weather of the Arctic is becoming all too real.

The loss of Arctic sea ice cover, due to climate change, has spurred a sharp rise in shipping traffic — as well as coast guard rescue missions — and increased the risks of oil spills, shipping accidents, and pollution, much to the apprehension of native communities who make their living on the ice.

It’s into these turbulent waters that the luxury cruise ship Crystal Serenity will set sail next August, departing from Seward, Alaska, and transiting the Bering Strait and Northwest Passage, before docking in New York City 32 days later.

The scale of the Crystal — 1,700 passengers and crew — and the potential for higher-volume traffic in the Arctic has commanded the attention of the coast guard, government officials, and local communities, all trying to navigate an Arctic without year-round ice.

“If something were to go wrong it would be very, very bad,” said Richard Beneville, the mayor of the coastal town of Nome, which the Crystal is due to visit. “Most cruise ships that get here have passenger manifests of 100, maybe 150. This is a very different ship.”

A century after explorer Roald Amundsen transited the sea route connecting the Pacific and Atlantic oceans, officials and local communities are struggling to keep pace with the changes in the Arctic set in motion by the disappearing sea ice.

Scientists expect the Arctic will be almost entirely ice-free in the summer within 25 years — exposing profitable new year-round shipping routes.

“The United States should be getting prepared by building infrastructure in the north,” Robert Papp, a former Coast Guard admiral and the State Department’s special envoy to the Arctic, said.

“Yes, we are concerned about this cruise ship going through but we have been concerned for a number of years because during the summer time Shell has been going up there to drill, other companies have been exploring, there has been an increase even in recreational sailors or adventure sailors going up there.”

The Crystal is by far the biggest and most luxuriously appointed vessel to sail through the Northwest Passage since the crossing became accessible to ships without an icebreaker in 2007. Just 17 ships crossed through the passage last year, according to the U.S. Coast Guard.

Prices for the journey aboard the 14-deck luxury liner start at nearly $22,000 rising to $120,000 for a deluxe stateroom — and this year’s cruise is sold out, according to the company.

The April 13 table-top planning exercise, involving U.S. and Canadian coast guard and government officials, will walk Crystal operators and rescue officials through the nightmarish scenario of rescuing hundreds of passengers up to 1,000 miles from the nearest coast guard base, officials said.

Communications in the Arctic are extremely challenging — cellphone reception is patchy, and there are no roads. Most of the towns along the Crystal’s route are tiny. Even Nome, which has a sizable population, has just 18 hospital beds.

“We all have to be very proactive in trying to game out what we do in an emergency situation,” Lieutenant Commander Jason Boyle, the Coast Guard’s prevention officer for the Alaska region, said in a telephone interview.

The Crystal will sail with an ice-breaking escort vessel carrying two helicopters along its entire route, Paul Garcia, a company spokesperson, wrote in an email. Ice pilots, polar bear researchers, and veterans of other Arctic expeditions will be aboard to ensure passengers’ safety and to protect the local wildlife, environment, and customs, the company said.

For the coastal town of Nome, and the other ports of call on the Crystal’s route, the cruise symbolizes the economic possibilities of an ice-free Arctic in the summer.

“I think tourism is good for Nome,” Beneville, the town’s indefatigable mayor, said. “In tourism there is a saying: ‘If people can get there, they will go,’ and that is becoming possible.” He went on: “There is a lot at stake here. We want Nome to be a strategic point in the north.”

But even before the Crystal Serenity began planning its voyage, the Coast Guard and local communities were raising concerns that the Arctic was not ready for the sharp rise in traffic through the Bering Strait.

The Coast Guard recorded 540 crossings through the narrow passage between the U.S. and Russia last year — more than double the number in 2008.

Commander Mark Wilcox, the Arctic planner for the U.S. Coast Guard, falls back on the phrase “tyranny of distance” to describe the epic challenges of assuring safe passage through the northern waterways for an increasing number of independent tourists.

On March 4, two British adventurers who set out to ski across the Bering Strait had to be flown to safety from thin ice — an operation that required two Coast Guard helicopters, a C-130 military transport plane, and 24 highly trained personnel deployed from a base 700 miles away, according to the coast guard.

Two years ago, a scientific research ship in the Chukchi Sea was diverted to rescue adventurers. In 2010, a smaller cruise ship went aground in the Canadian Arctic, forcing the evacuation of some 300 passengers.

“We are starting to see more of the adventure tourists that have a lot more interest in the Arctic,” Wilcox said. “As we see more human activity it increases our risk for potential incidents.”

In addition to emergencies, local people said they were afraid of oil spills, pollution, and waste, because of the rise in shipping traffic. In 2012, hunters from St. Lawrence Island reported finding heavily oiled seals and seabirds in the Bering Strait. A year earlier, government wildlife biologists began recording a mysterious illness killing off seals, as well as avian cholera.

Local communities grew concerned about the use of heavy bunker fuels, and dumping of gray water from passing vessels.

The loss of ice opening up the Arctic to year-round traffic was also upending the way of life for native Alaskan communities who have used the ice as a platform for hunting and fishing, or as transport routes. The winter ice could no longer be trusted, according to local people.

“There are five to seven people in the last five years that I know of off the top of my head who have gone through the ice on snow machines or four-wheelers while traveling,” said Anahma Shannon, who works with Kawerak, a service organization for native Alaskans in the Bering coastal region.

In typical winters, there is about a mile of solid ice from shore, enabling walrus hunters to approach their prey on land. Hunting from small boats is much riskier. But in this year’s record high temperatures, the ice is thin and drifting away from the shore. “This year may be the first year in recent history that we haven’t had the outside ice,” Shannon said.

The season’s thin and slushy ice was also hurting fisheries. In past winters, it would be common to see people fishing for king crab on the ice off Nome, setting out traps through holes drilled into the ice. Commercial fishermen might strike out farther, riding their snowmobiles six or seven miles across the ice to Sled Island. But the thinner ice was squeezing fishermen into smaller areas and shallower waters, said Adem Boeckmann, a commercial fisher.

“The lack of ice is making it tougher to find the crab and harvest them,” he said. He estimated the catch was only a third or a half of last year’s. “We are not making money, we are just making ends meet.”

The native Alaskan communities recognize that cruise ships and tourist dollars could bring big money to places like Nome. But they were already experiencing loss of income and a way of life because of the retreat of the sea ice.

The prospect of a flood of visitors to the region was only adding to those fears of losing their livelihoods and their culture, said Austin Ahmasuk, who runs Kawerak’s marine program.

“We can draw these very clear parallels from the past for the possibility of the destruction of our culture,” he said. “Let’s just say we suspect that maybe not the most holistic way of approaching development will occur.”