The Alberta wildfire is dumping mercury into the atmosphere 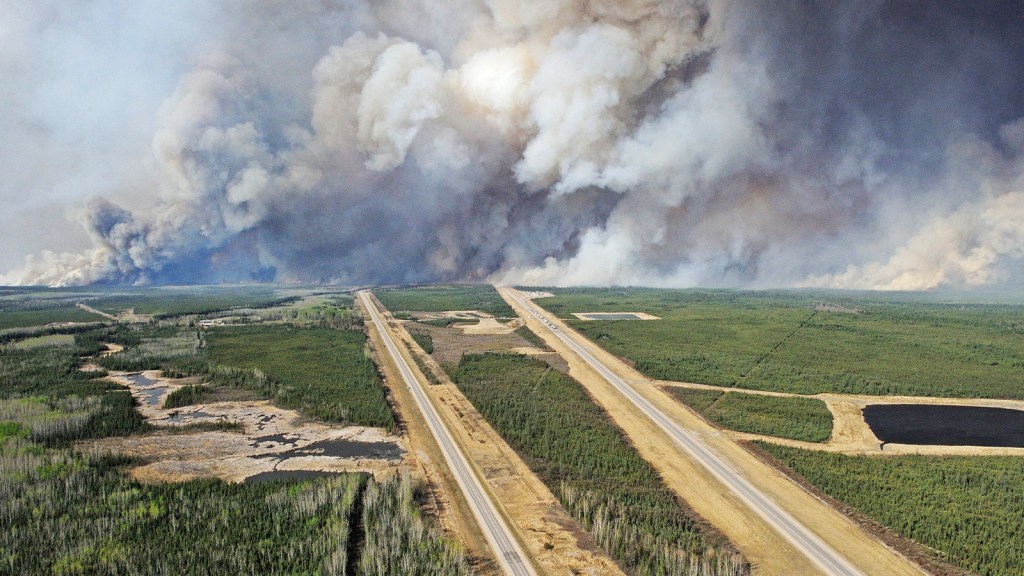 The Alberta wildfire is dumping mercury into the atmosphere

Alberta’s massive wildfire is sending more than just smoke into the air.

The Fort McMurray fire, which merged with another smaller wildfire last week, has displaced residents and cleared nearly everything in its path, including swaths of the region’s dense boreal forests. The combined blaze has already released the equivalent of 5 percent of Canada’s annual carbon dioxide emissions and is expected to continue to burn for the next few months. The fires have also filled Fort McMurray’s air with dangerous contaminants, ozone, and nitrogen dioxide, pushing its air pollution to off-the-charts levels. Along with all that carbon, the fires are releasing mercury into the atmosphere.

When a huge fire rages through a boreal forest, it is probably going to hit some peatlands, 80 percent of which are located in high latitudes. Peat contains more mercury than other soils, accumulated in layers that can build up over thousands of years. Peatlands are largely stable sinks for mercury — until a wildfire comes along.

“All of a sudden, you have this big release in a fire,” said Christine Wiedinmyer, a scientist at the National Center for Atmospheric Research’s Atmospheric Chemistry Observations and Modeling Lab. “The mercury that before was staying in one place is now in the atmosphere, and can be transported downwind, adding more mercury in places where we don’t necessarily want it.”

And mercury may be able to travel far away from its source. By some estimates, mercury in the atmosphere can travel around the Earth for about a year before being deposited on land or water.

“The mercury level in rain is not only from us — the sources are also global, like when it gets released Europe and Asia and deposited down,” said Yanxu Zhang, a postdoctoral researcher at Harvard University who studies mercury and other pollutants. “It has the capability for long-range transport, which makes it harder to control and combat.”

Mercury exposure can cause insidious effects even at low levels, worsening health problems that already exist. It depends on the dose and the type of mercury, and there are three types: elemental, which can cause neurological damage; salts, industrial pollution causing kidney problems; and organic, the type that gets into the food chain and causes birth defects and is why pregnant women are advised against eating fish.

“In a lot of cases, mercury has a lasting impact — but the degree to which that resonates is something we don’t understand yet,” said Dave Krabbenhoft, a research hydrologist at the U.S. Geological Survey who’s been studying mercury contamination for 28 years.

The 2012 U.S. mercury and air toxics rule, meant to clean up the industrial kind of mercury pollution from power plants, is expected to prevent some 11,000 premature deaths, 4,700 heart attacks, and 130,000 asthma attacks every year, saving up to $70 billion in healthcare costs annually.

Boreal fires could roll back some of those numbers. Since these fires take place in less-populated areas, they are often left to burn longer, releasing more mercury. This problem will only be exacerbated by the increasing intensity and frequency of boreal fires due to climate change.

We don’t yet know exactly how much mercury Alberta’s fires are releasing — and we might not know for years, until scientists can complete a post-mortem review. But one thing’s for sure: Those plumes of smoke aren’t healthy for you.