Economics has long been nicknamed the dismal science, and climate economics can really pile on the gloom and doom. Basically, when individuals act rationally and self-interestedly, in an unrestrained market economy, we pollute the planet to the gills and poor people bear the brunt of the ill effects. Case in point: Earth, right now.

Yoram Bauman, the world’s first and only stand-up economist, likes to inject some lolz into grim climate economics (kind of like Grist). He’s a climate hawk, policy wonk, and Ph.D economist who uses humor to help explain complex ideas. We last ran into Bauman while he was promoting his sharp-witted Cartoon Introduction to Climate Change.

For his next act, Bauman wants to introduce a revenue-neutral carbon tax for Washington state. The punch line: He thinks he can get both political parties on board.

The climate comiconomist calls his proposal to tax carbon a “bipartisan approach.” That’s right, he and his grassroots group, Carbon Washington, think they offer a climate-protection policy that right-wingers might dig, even though they use the T-word — tax. The key for Bauman’s policy is that it puts a price on carbon without making government any bigger.

We’ve written before about why Republicans will not back a carbon tax, even in the Evergreen State. Heck, recently it seems that indisputable climate science can’t be rendered conservative-friendly. Is this professional wisecracker yanking our carbon chains?

Nope. Turns out Bauman’s pretty serious about crafting a politically palatable plan to reduce emissions in Washington, a state with ambitious goals for cutting carbon but no comprehensive climate policy on the books yet. (Gov. Jay Inslee does have a spiffy proposal on the docket right now. More on that later.)

Carbon Washington plans to put its initiative in front of the state legislature in Jan. 2016 — provided they forage or forge the needed 300,000 Washingtonian signatures this year. If the lawmakers in Olympia, Wash., haven’t passed the proposal by that November, then the initiative goes on the ballot for a people’s vote.

Even though it’s unlikely the state’s elected officials will approve the carbon tax, this legislature-then-ballot strategy will keep the initiative in the spotlight all year, giving Carbon Washington more time to rally the electorate. Plus, 2016 is a presidential election year, which means voters who care about the future of humanity might actually turn out — good news for passing climate policy.

Bauman thinks that the GOP’s fundamental opposition is to big government, not climate policy as such. Before I could ask, he interviewed himself: “Can we get climate policy without bigger government? The answer is yes.”

Instead of using the big chunk of cash generated by a carbon tax for government spending, Carbon Washington wants to use the pile of revenue to reduce the sales tax by one percent; rebate money to low-income families; and effectively eliminate the state’s business and occupations (also known as B&O) tax, so companies are charged for what they burn, not what they earn. All of the money raised by the carbon tax would be offset by savings for taxpayers and businesses — a tax swap.

Those market-friendly tax cuts ought to make right-wingers dig the proposal, right?

Maybe. At a recent panel discussion on carbon pricing, Seattle’s resident climate policy wonk KC Golden said he’s skeptical about “the idea that we’re just going to do this one thing [tax carbon] and it’s going to rise above politics.”

In political reality, elected representatives want goodies to take home to their constituencies, not economically efficient tax shifts. Regular voters, too, like to see something tangible from a new tax, rather than just a confusing reshuffle of the tax code.

And then there’s the fact that many Republicans don’t even believe carbon emissions cause climate change in the first place.

Bauman is bullish about breaking through that barrier too. “I don’t think that anti-science is a fundamental tenet of the Republican party,” he says.

Explicitly, he’s right: The GOP does not officially denounce geophysics or organic chemistry. But c’mon, last week 49 of the U.S. Senate’s 54 Republicans voted against a measure to acknowledge that human activity is significantly changing the climate. Conservatives have been devout climate deniers for over a decade.

If Bauman the economist seems politically naive, Bauman the comedian shows he understands both sides — and the center — quite well. To get a feel for his smart funniness, you can watch this hilariously accurate description of budgeting and the political spectrum:

Since a majority of voters wants both fewer taxes and more spending, Bauman jokes to Seattle Times columnist Danny Westneat, “What we really need is an initiative to repeal the laws of arithmetic.”

The Carbon Washington proposal, however, comes about as close to getting something for nothing as those non-negotiable math rules allow: The state’s budget is unchanged and pollution goes down, simply by tweaking economic incentives to take the climate into account.

This revenue-neutral alternative is modeled after British Columbia’s super popular and effective carbon tax scheme, which was inspired in part by a 1998 book Bauman coauthored, Tax Shift. The tax applies to fossil fuels based on the emissions that will be released once they’re burned — $25 per ton of carbon dioxide. Then, the costs get passed through the economy. For example, household electricity bills will go up because the natural gas purchased by power plants will be taxed.

Bauman believes his carbon tax will come out a wash for most people. “Folks are going to pay a few hundred dollars more a year on fossil fuels, and a few hundred dollars less a year on everything else,” he says. Washingtonians can use his handy Carbon Tax Swap Calculator, created by a team of University of Washington computer whizzes, to see how the proposed policy would affect their personal finances.

For the state as whole, Carbon Washington’s proposal would raise an estimated $1.7 billion, and save taxpayers and businesses approximately $1.7 billion through tax reductions. 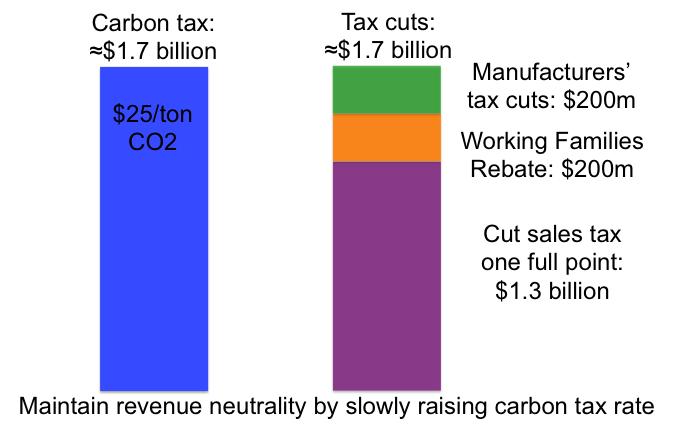 But the revenue-neutral carbon pricing policy may never get voted on, if the state’s governor has his way.

Grist’s David Roberts talked to the “greenest governor in the country” about his big, bold climate plan, which was introduced in the state’s House and Senate on Jan. 19. The Carbon Pollution Accountability Act, as it’s formally titled, will be debated (already happening), torn apart, reconstructed, and debated again through perhaps the entire 2015 legislative session.

Inslee’s proposal differs from that of Carbon Washington in two fundamental ways: First, it prices emissions through a cap-and-trade scheme, which in theory produces the same results as a carbon tax but in practice works differently — and can add a lot more complexity.

Secondly, the governor’s plan uses the revenue from pricing carbon to pay for underfunded government programs like transportation and education. (By contrast, Carbon Washington’s tax swap leaves the state’s budget issues to be dealt with though other means.)

Because Inslee’s climate policy proposal punishes big-business polluters and raises a ton of money for the state government to spend, Bauman frequently refers to it as “the progressive takeover of the world.” I don’t think the stand-up economist is joking.

But Carbon Washington doesn’t want to set up a competition between the two proposals. “We are not opposing the governor’s policy,” Bauman said at the above-mentioned carbon-pricing panel discussion. “We wish the governor the best of luck with that.”

Instead of a rival, Bauman relates his proposal to a relief pitcher, ready to take the mound in 2016 if Inslee’s starter falters in the late innings of this year. Ultimately, though, they’re both on the same team. You know, the one trying to save the climate. Sportsball!

Clearly, the Carbon Washington revenue-neutral carbon tax proposal has a daunting journey ahead, but if there’s anyone fit for convincing people of all political stripes to hear him out it’s the stand-up economist.

Bauman’s comedy act, which he often performs for conservative businessfolk and economists, starts off by getting them to laugh at routines like “Shit happens, the economics version” and his hysterical translation of Greg Mankiw’s 10 principles of economics.

Then, about 15 minutes in, he gets (only a little) less funny. With the audience loosened up and hanging on his every word, the environmental economist has an opening to lecture on climate change and carbon taxation policies. Behold Bauman’s spin-off of the famous (and entirely imprecise) models of Yale University climate economist Bill Nordhaus — the VANILLA ICE model:

If Bauman really can get through to righties about why pricing carbon is a good idea, then maybe we should take the funnyman seriously.