Climate gets a prime spot in the sixth Democratic debate 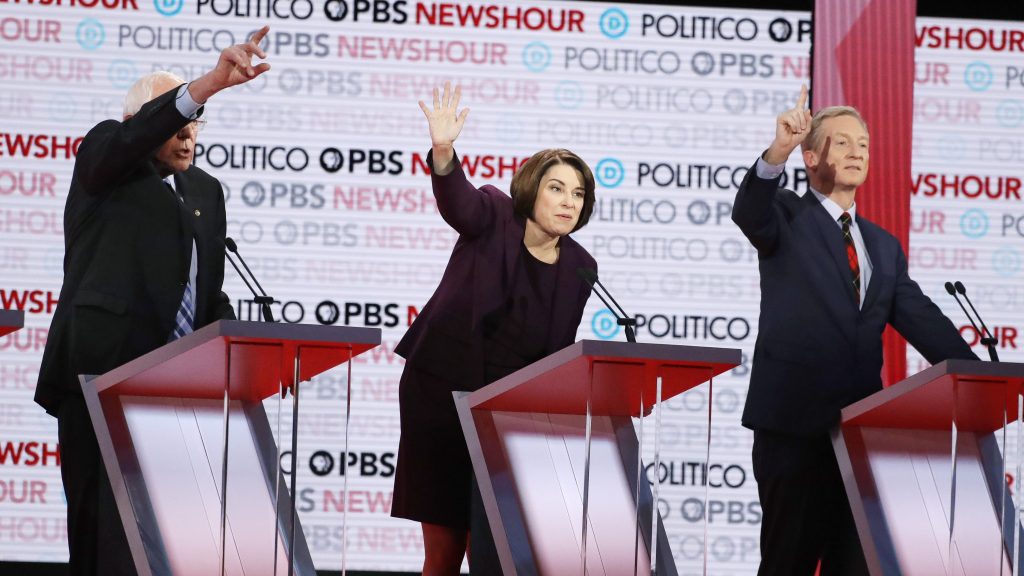 Climate gets a prime spot in the sixth Democratic debate

After five Democratic debates where candidates were often asked superficial questions about climate change, or no questions at all, the burning planet finally got its 15 minutes of fame on Thursday night. Well, 13 minutes, if we’re being precise. But those 13 minutes contained one of the strongest climate discussions in the primary so far.

With six weeks left to go before the Iowa caucuses, only seven of the 15 remaining Democratic candidates made it to the debate stage in Los Angeles for the sixth primary debate, which was hosted by PBS and Politico. Notably absent were late-arrival Michael Bloomberg and Senator Cory Booker, whose polling numbers are just below those of Senator Amy Klobuchar and Andrew Yang, both of whom made the cut.

As has been a pattern in recent debates, Bernie Sanders was the first to mention climate change unbidden. After a requisite question about Wednesday’s impeachment of President Trump, the senator from Vermont was asked if he would vote in favor of the new United States–Mexico–Canada Agreement, a trade deal that currently has the support of labor unions. Sanders criticized the pact, arguing that it does not in fact stand up for workers. “And by the way,” he added, “the word ‘climate change’ is not described in this new NAFTA agreement at all, which is an outrage.”

The 82 percent of Democrats who consider climate a top priority in the election didn’t have to wait all night to see whether the moderators deemed the topic important enough to bring up. Shortly after Sanders’ comment, they confronted the candidates with three questions that probed the issue with more sophistication than we’ve seen in any previous debate.

The first was directed at Klobuchar, who was asked if she would support federal policy to relocate communities that are displaced by climate change. Klobuchar said she hoped entire cities wouldn’t have to be moved but admitted that some citizens likely would. The senator from Minnesota went on to tout her plans to rejoin the Paris Agreement, reinstate the Obama-era Clean Power Plan, and pass a carbon tax. “There’s an Ojibwe saying that great leaders make decisions not for this generation, but seven generations from now,” she said. “This president doesn’t keep his decisions for seven minutes.”

When Tom Steyer took the mic next to answer the same question, he called out Pete Buttigieg for not prioritizing climate more, especially considering that the South Bend, Indiana, mayor is the youngest candidate. “People in his generation understand that this is a crisis,” Steyer said. Buttigieg shot back arguing that climate change was far from theoretical for him. “My neighborhood flooded in the second of two once-in-a-millennium floods that we had in two years, do the math on that,” he said.

The next question went to Joe Biden, who was asked whether he would be willing to sacrifice oil and gas growth — as well as jobs — for a green economy. Barely skipping a beat, the former vice president — who’s taken heat from activists for attending a fundraiser hosted by a fossil fuel executive — confirmed that he would. Biden echoed an earlier refrain of Steyer’s that the great challenge of climate change brings with it great opportunity, before calling back to the issue of relocating communities. “We have to not rebuild to the standard that existed before, we have to rebuild to the standard that exists today,” he said. “For example, we shouldn’t build another new highway in America that doesn’t have [electric vehicle] charging stations on it.”

Then Sanders chimed in, criticizing the question about relocation, which assumes we won’t be able to mitigate many of the worst effects of climate change. Then he threw down on the “how are you going to pay for it?” question. “Instead of spending $1.8 trillion a year globally on weapons of destruction, maybe an American president — i.e. Bernie Sanders — can lead the world instead of spending money to kill each other,” he said. “Maybe we pool our resources and fight our common enemy, which is climate change.”

The final climate question fell first to Elizabeth Warren, who was asked how we could get to net-zero carbon emissions by 2050 without nuclear power. The senator confirmed that new nuclear facilities were a nonstarter for her. She touted America’s ability to innovate itself out of crises and then fell back on her central campaign argument that fighting corruption in Washington is the first step to a greener, safer, and more equitable future.

Thursday’s event was the smallest and whitest debate of the primary, a fact that the moderators addressed head on. After the climate blitz was over, PBS NewsHour journalist Amna Nawaz asked Andrew Yang, “What message does this send to voters of color that you are the lone person of color on this stage?” When she kicked the question about the lack of onstage diversity over to Bernie Sanders, things got awkward.

“I will answer that question, but I wanted to get back to the question of climate change,” Sanders said. Before he could continue, Nawaz cut him off. “With all due respect, this question is about race, can you answer the question as it was asked?” Nevertheless, Sanders persisted. “Yes, in fact I can,” he replied. “Because people of color will be suffering most if we do not deal with climate change.”

After that riposte, the moderators and candidates moved on. Over the next nearly two hours climate would be mentioned far fewer times than the wine cave where Buttigieg held a fundraiser earlier this month. But like that posh Napa Valley spot, tonight’s climate discussion — relative to past debates — felt downright luxurious.