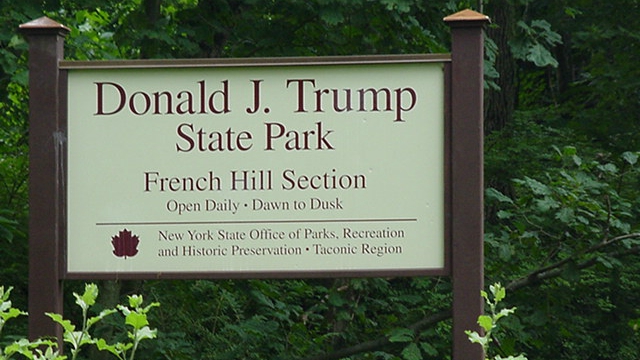 If Donald Trump stands for one thing, it’s overselling. So the New York state park named for him is an appropriate emblem. Long after his electoral prospects have faded, the park will stand as an apt metaphor for the man himself.

Driving south on the Taconic State Parkway, through Westchester — the suburban county immediately north of New York City — you will pass several massive signs for Donald J. Trump State Park. Coming immediately before signs for Franklin D. Roosevelt State Park, they are confounding, and ironic. There’s a state park named after Donald Trump? Usually state parks are named for deceased public servants, like Roosevelt. Why is this one named for a living real estate developer, much less a controversial and boorish one?

In the 1990s, Trump bought a swath of land in two Westchester towns in the hopes of developing a golf course. Golf courses are environmental disasters, leading to the chopping down of trees, spraying of pesticides, and slurping up of water. The towns rejected Trump’s proposal, though not for high-minded green reasons but for prosaic ones, such as how it would affect parking. Eventually he gave up, and in 2006 he donated the land to the state. As sometimes happens when rich people give their property to the public, the park was named after Trump. As Phil Reisman, a columnist for the Journal News, the Westchester newspaper, recently recalled, “Trump announced the parkland donation in Putnam Valley nine years ago at an elaborate event, which included a catering tent, bottles of Trump Ice-brand water and a TV crew.”

Trump, unlike many other super-rich park benefactors, did not make a donation to create a private endowment to help with upkeep of the park. He did, however, receive a tax deduction for donating the land. The state added big signs to the adjacent highway advertising a park that was envisioned as having parking, hiking trails, and picnic tables. Those never materialized.

Then the Great Recession hit and the state parks budget fell under the axe. Trump Park, not exactly one of the crown jewels of the state park system, was closed altogether. Trump was infuriated by the stain on his great legacy and he demanded that the state return the land to him, to no avail.

As The New York Times observed in 2010, the park was unimpressive even before it was shut down:

The park is … a decidedly un-Trumpian preserve of 436 acres of woods and wetlands, with footpaths, on two parcels along the Taconic State Parkway … The park has no dedicated staff, and is lightly maintained by workers from the nearby Franklin D. Roosevelt State Park.

On a side note, signs for the park posted on local streets have tended to disappear over the years. It is unclear whether the takers wanted souvenirs or to sabotage the park.

It has only become less impressive since closing. MSNBC’s Rachel Maddow Show sent a team to the park this summer to investigate. After five years of neglect, it has deteriorated and become overgrown. The crumbling buildings are covered in graffiti, the paths hidden by brush. It is, in Maddow’s phrase, “an undead zombie park.”

And yet the state Department of Transportation has neglected to remove the road signs pointing to the park. Reisman observes, “In a way they are indicative of the Trump strategy, which is to loudly tout the brand and give little of actual value in return.”

Even if the park were in good shape, it would still be bad form to name it after a bigot like Trump. His presidential campaign is powered in large part by xenophobia. In his campaign announcement speech, he called unauthorized Mexican immigrants “rapists.” A New Yorker piece last week on the decline of Atlantic City revealed another aspect of his racism in this shocking passage concerning Kip Brown, an African American who was employed at Trump’s properties in the city:

Brown … used to work in the casinos, at the Showboat, bussing tables, and at Trump’s Castle, stripping and waxing floors. “When Donald and Ivana came to the casino, the bosses would order all the black people off the floor,” he said. “It was the eighties, I was a teen-ager, but I remember it: they put us all in the back.”

Public parks should be welcoming to all, and they should not be named for people whose political identity or legacy is primarily that of racial oppression. That’s why there is a Change.org petition calling on New York Gov. Andrew Cuomo to rename Trump Park. It only has 386 signatures. But, then again, how many should it need?