Should climate hawks push Elizabeth Warren to run for president? 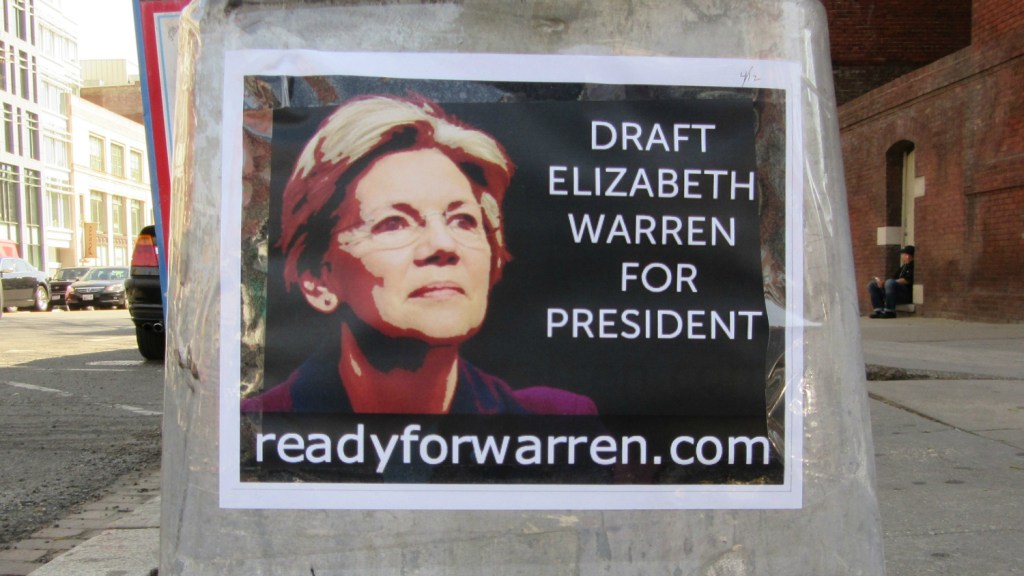 Should climate hawks push Elizabeth Warren to run for president?

Progressives have been itching for Elizabeth Warren to run for the Democratic nomination for president. Now some greens are feeling the itch too.

Climate change and the environment have never been top issues for the Massachusetts senator, but she’s been a solid green vote. More importantly, Warren’s aggressively anti-corporate stances are right in line with those of many greens and climate hawks — standing up to fossil fuel giants, to other big polluters, and to free-trade pushers who would throw the environment under the bus. As National Journal notes:

Warren is best known as an anti-Wall Street crusader, not an environmental advocate. But her sharp criticism of the Keystone XL pipeline and disdain for the Trans-Pacific Partnership, a trade deal that environmentalists worry could weaken environmental protections, has won the senator admiration from climate activists.

Indeed, greens cheered when she ripped into Keystone in January. And she attracted more green fans earlier this month when she spoke at a Good Jobs, Green Jobs conference, again as reported by National Journal:

“A lot of people think that regulations bring higher costs,” Warren said. “But regulation is also about making sure that someone doesn’t get to beat out the competition because they’re dumping filth in the river or spewing poisons in the air.”

Warren warned that if corporations are not properly policed, the cost of doing business will be borne by “children who can’t drink the water.”

The senator also slammed major oil companies, including ExxonMobil, Shell, Chevron, BP, and ConocoPhillips, for pulling in “combined profits of 90 billion dollars” in 2014 while the industry “sucked down $5 billion in subsidies from the American people.”

Warren has said in no uncertain terms that she is not going to run, as recently as last month. But the grassroots enthusiasm keeps growing nonetheless. In its latest manifestation, the group Ready for Warren is touting support from a bunch of greens:

Happy #EarthDay! We released a list of 1,500 Environmental Activists for Warren to kick it off http://t.co/BZiK896tbo pic.twitter.com/ouVpporlEl

From the group’s announcement:

More than 1,500 environmental activists have stepped up publicly to call on Elizabeth Warren to run for president — showing just how much support Warren has from communities organizing to stop the climate crisis, bring about a new green economy, and put workers and the environment ahead of corporate interests.

The 1,500+ names are all ones you don’t know (or at least ones I don’t know), but there are a couple of bigger-name greens who’ve called previously for Warren to run: Van Jones, formerly Obama’s green jobs czar and now cohost of CNN’s Crossfire, and Annie Leonard, head of Greenpeace USA and founder of the Story of Stuff Project. Sierra Club Executive Director Michael Brune has also said nice things about Warren, calling her a “strong voice for tackling the climate crisis.”

With the controversial Trans-Pacific Partnership in the news right now, Warren is getting another burst of adulation from the green-leaning left. Warren, like many progressives and enviros, thinks the secret trade deal stinks and opposes giving President Obama fast-track authority to negotiate it without input from Congress. She’s been particularly outspoken on this score. Obama said on Tuesday that Warren was “wrong” about the TPP. Warren shot right back and defended her views:

The Obama Admin says I'm wrong – we shouldn't worry about TPP. So why can’t the American people read the deal? http://t.co/PoavXNJlRS

Among the many reasons to fight the TPP, Warren has articulated pretty compelling environmental ones:

ISDS [the Investor-State Dispute Settlement provision in the TPP] would allow foreign companies to challenge U.S. laws — and potentially to pick up huge payouts from taxpayers — without ever stepping foot in a U.S. court. Here’s how it would work. Imagine that the United States bans a toxic chemical that is often added to gasoline because of its health and environmental consequences. If a foreign company that makes the toxic chemical opposes the law, it would normally have to challenge it in a U.S. court. But with ISDS, the company could skip the U.S. courts and go before an international panel of arbitrators. If the company won, the ruling couldn’t be challenged in U.S. courts, and the arbitration panel could require American taxpayers to cough up millions — and even billions — of dollars in damages.

What’s particularly appealing about Warren to progressives, including enviros, is that she’s a bad-ass fighter. My all-time favorite Warren quote is from 2010, when she was battling for creation of the Consumer Financial Protection Bureau: “My first choice is a strong consumer agency. My second choice is no agency at all and plenty of blood and teeth left on the floor.”

For now, none of the green groups that endorse candidates have taken sides in the race. Many enviros are eyeing Hillary Clinton warily, recognizing that she’s about as good as Obama on climate change (she strongly endorses his Clean Power Plan) and about as bad as Obama on climate change (she endorses fracking and an “all of the above” energy policy). Clinton also comes with her own set of complications, like the fact that her family’s foundation has taken loads of cash from oil companies and oil-rich foreign countries.