Here's the green, bike-loving candidate who could beat Scott Walker in Wisconsin 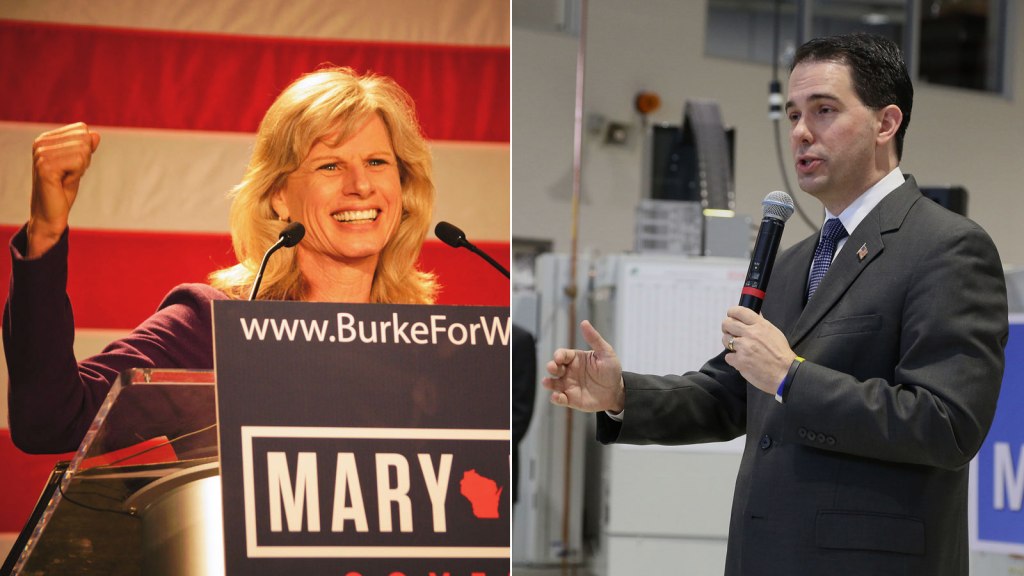 Here’s the green, bike-loving candidate who could beat Scott Walker in Wisconsin

According to the latest polls, Democrats might have a shot at defeating right-wing Wisconsin Gov. Scott Walker and replacing him with a green-friendly bicycle executive.

Perhaps no Republican politician has come to embody every liberal’s worst fears about the Tea Party movement more than Walker. In 2011, Walker signed a bill to remove collective bargaining rights from his state’s public employees. The union-busting move brought out liberal Madison in all its bearded, banjo-playing glory. Protesters occupied the state capitol and gathered enough signatures to subject Walker to a recall election. At the height of the controversy, a prankster successfully called Walker posing as David Koch, and posted a recording of Walker saying he had considered “Koch’s” suggestion of planting troublemakers among the protesters to make them look bad.

Then Walker won his recall election, and the anti-Walker backlash receded from the national stage. Walker’s successful implementation of his far-right agenda has made him a hero to movement conservatives and a top-tier presidential contender.

Walker is no friend of environmental protection. He has avoided taking a stance on climate science, but he has pledged never to pass a carbon tax, and he’s raised money for the Heartland Institute, a notorious climate-denier group. He’s also worked to hamper rather than promote clean energy, for example by imposing regulations to keep wind turbines further away from homes. Here’s more on his environmental record from Bill Berry, a columnist for The Capitol Times, a progressive newspaper based in Madison:

Our rich conservation history has been tossed under the bus by Walker. Actually, it’s been handed off to out-of-state corporate interests.

Walker was squarely behind efforts to loosen environmental regulations for the Gogebic strip mine, which threatens precious land, water and air resources in northern Wisconsin. He allowed the company that owns the mining rights to write the new legislation. GTac, short for Gogebic Taconite, is owned by Florida-based mining interests that have logged thousands of environmental and safety violations. …

Walker cheers the frac sand mining boom in western Wisconsin and efforts to loosen local powers to regulate the mines, which are primarily owned by out-of-state interests.

Now Walker is up for reelection. If he were defeated, he would be knocked out of presidential contention and it would send a message that serving the interests of business over workers is not so popular in a Midwestern swing state. Walker wouldn’t have much to worry about if he were at all popular because an off-year election is typically more challenging terrain for Democrats, especially when their party is in its second consecutive term in the White House. The Wisconsin electorate is badly polarized along black-white and urban-suburban lines. Walker’s white suburban base is presumed likely to come out in greater numbers in a lower-turnout off-year election than in a presidential year. And he is indeed the favorite, but because his approval ratings rarely crack 50 percent, the polls are consistently close.

Enter Mary Burke, the Democratic gubernatorial nominee. You probably haven’t heard of her, but you might have heard of her family’s company, Trek Bicycle, where she worked for a few years. She also worked as a business consultant at McKinsey and served as Wisconsin’s commerce secretary under Walker’s Democratic predecessor, Jim Doyle.

Burke offers a stark contrast to Walker. She’s for restoring collective bargaining rights, raising the minimum wage, and legalizing same-sex marriage and medicinal marijuana. She’s just as progressive on green issues. The Wisconsin State Journal summarized her environmental platform as follows: “She would insist on more monitoring of air quality around [frac] sand operations along with scientific analysis of potential health hazards, as well as more consistent enforcement in general against polluters, greater conservation of natural areas and more support for alternative energy sources such as wind, solar and biodigesters.”

Walker opposes transportation alternatives that could help people get out of their cars. He rejected an $810 million stimulus grant from the federal government to build a rail line from Milwaukee to Madison. Rail advocates recently posted a billboard on the very same corridor criticizing him for that. Meanwhile, Walker’s transportation department is looking to spend $800 million to expand an interstate highway in Milwaukee.

When the Sierra Club endorsed Burke, it praised her support for “cleaner, safer transportation choices, including rail, mass transit, walking, and bicycling.” Burke, though, has not been very specific on her transportation plans. Perhaps she doesn’t want to live up to any stereotypes about crunchy bikers.

For the last few months, Burke has been within striking distance of Walker, and sometimes even ahead, although the average of all polls taken on the race has her trailing by 2 points. Politicos are taking note. On Tuesday, President Obama, who carried Wisconsin twice, held a campaign rally in Milwaukee on behalf of Burke. The New Republic’s Alec MacGillis argues that Walker is getting nervous. Burke has attacked Walker as anti-woman, and this week Walker’s campaign felt compelled to issue a new ad defending him against those charges.

One reason Burke may fare better than other Democrats in this off-year election: While Wisconsin has passed a voter ID law designed to disenfranchise Democrats, the Supreme Court has put the law on hold. So authorities won’t be able to turn away voters, but Wisconsin’s African-American community will be extra-motivated to come out on Tuesday in response to the attempt to prevent them from voting.

Of course, being a corporate lackey gives Walker some advantages. As The New Yorker notes, Walker has raised considerably more money than Burke, and about 45 percent of his campaign funds have come from out-of-state donors, compared to 20 percent of hers.

But even just a really close contest might hurt Walker’s 2016 prospects and fire a warning shot across the bow of Republican governors who would govern swing states from the far right. And the Wisconsonites who still come to the capitol every day to sing pro-union songs in protest of Walker’s rule would have another four years to keep their chops sharp.