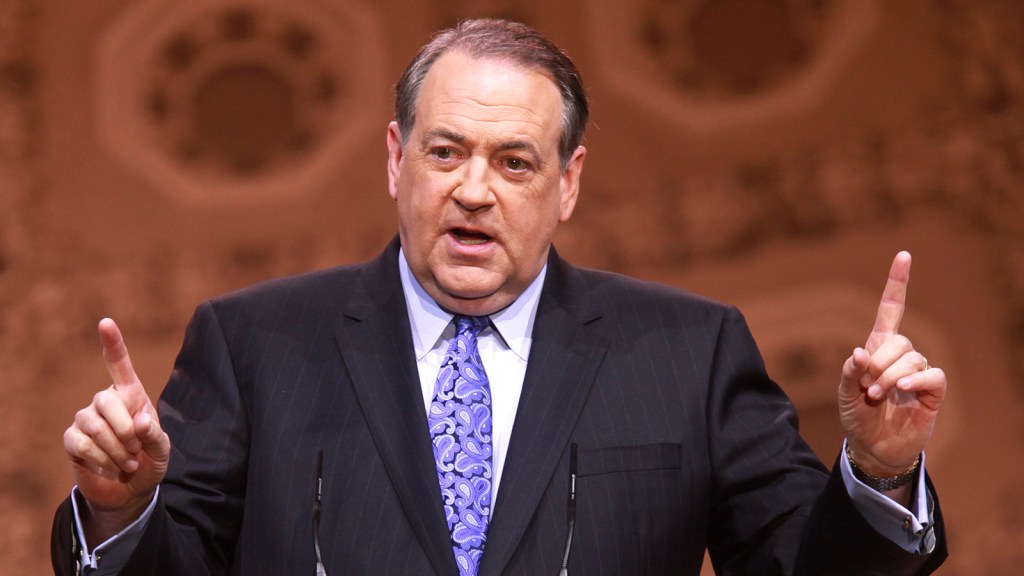 As soon as they raised the possibility of running for president in 2016, Jeb Bush and Mitt Romney gathered waves of attention from the national media. And now that Romney’s flip-flopped his way back out of the race, he’s getting another wave. Meanwhile, a potential candidate who might stand an even better chance of winning the Republican nomination is being largely overlooked. And while Bush and Romney are supposedly moderate, this other guy is the only likely Republican candidate ever to have supported cap-and-trade.

I’m speaking, of course, about Mike Huckabee. The former Arkansas governor is undoubtedly conservative, especially on social issues. But he has a softer side, with the amiable charisma of an avuncular Southern preacher. This geniality — and emphasis on reaching out to non-traditional Republican constituencies, like the younger voters who helped him win the 2008 Iowa caucuses — has led him to sometimes take unexpected positions in favor of education investment and carbon regulation.

It also could lead him to victory in the Republican primaries. Bush (like Romney) comes from the GOP’s monied establishment wing, and that gets him a lot of attention from the East Coast establishment media. But neither Wall Street nor the mainstream media will solely determine the Republican nominee. The Republican primary electorate is a lot more Evangelical, rural, and socially conservative than the country as a whole. That is to say, it looks a lot more like Huckabee, a former Baptist preacher from Hope, Ark., than like Bush. That’s why in 2008, despite being vastly outraised and outspent by Romney, Huckabee came from nowhere to win the Iowa caucuses and finish second in delegates overall to John McCain.

This time, Huckabee is vastly better known, and he will therefore be better-funded. Huckabee has an email list with hundreds of thousands of names. He has just stepped down from his Fox TV show, which was watched by over a million viewers, to consider a presidential campaign. In 2012, a relatively dour candidate from Fox, Rick Santorum, came from far behind on the strength of the Evangelical conservative vote to beat Romney in Iowa.

Early polls show Huckabee is strong nationally and in key early states. In Iowa, a Public Policy Polling survey found Huckabee had the highest approval rating among Republicans of any presidential contender. He led the entire field in the three most recent Iowa polls, including a nine-point lead in a CNN poll and four in a poll from Fox. The candidate who came in second in those last two Iowa polls, Paul Ryan, isn’t running. Huckabee is second to Bush in South Carolina. Nationally, with Ryan now out, Huckabee is bunched up in a three-way tie with Scott Walker and Rand Paul for third place, behind Bush and Chris Christie, according to the Real Clear Politics polling average.

But Huckabee is likeable and an Evangelical, while most of his main competitors are neither. In both Iowa and South Carolina, more than 60 percent of Republicans voting in the primaries or caucuses will be born-again or Evangelical Christians.

So Huckabee is a serious, underrated contender for the GOP presidential nomination. But would he protect the climate? Probably not. While Huckabee appears to have actual, unwavering beliefs, such as his opposition to abortion rights, environmentalism is not one of them. When Huckabee ran for president in the 2008 race, the Evangelical “creation care” environmental movement was at its peak and the GOP in general was more accepting of climate science. As The New Republic noted in 2011, “Between 2006 to 2008, creation care seemed poised to transform evangelical politics. 86 evangelical leaders initially signed the Climate Initiative in 2006 — it had more than 100 endorsers by the next year.”

And so at a 2007 climate change conference in New Hampshire, Huckabee backed climate action. “Climate change is here, it’s real,” he said. “I also support cap-and-trade of carbon emissions.” Huckabee framed it as a “moral issue,” saying, “We have a responsibility to reduce greenhouse gas emissions, to conserve energy, to find alternative forms of energy that are renewable and sustainable and environmentally friendly.”

But the Evangelical dalliance with creation care was brief. As Republicans turned away from climate science in 2009, an Evangelical backlash against environmentalism brewed, and Huckabee fell into line. In 2010, Huckabee falsely claimed that he had never backed cap-and-trade, saying, “I never did support and never would support it — period.”

Now white Evangelicals have cemented their status as the most anti-environmental religious group. As The New Republic observed on Thursday, “Recent polls suggest evangelicals are more likely than any other religious cohort to chalk worsening natural disasters up to the apocalypse, instead of human impacts on the environment.” And Huckabee gives them what they want. In 2013, he hosted leading climate science denier James Inhofe on his radio program, while contributing a few whoppers of his own. “When I was in college, all the literature at that time from the scientific community said that we were going to freeze to death,” said Huckabee. He also claimed that the 2010 volcanic eruption in Iceland spewed more CO2 into the atmosphere than all human activity over a century. Both claims are wildly untrue.

So it looks like Huckabee’s stance on climate change will continue to be determined by his political interest. That will mean appealing to the religious social conservatives who have propelled him into the national spotlight. Huckabee is already working to suck up to them with ridiculous culture-war complaints about how women in New York City swear too much and how the Obamas shouldn’t let their daughters listen to Beyoncé. If this all sounds stupid to you, that means Huckabee’s doing it right. He’s going after the crowd that gets bent out of shape about things like the “War on Christmas.” That’s bad news for the climate, because “creation care” is no longer a driving force among Evangelicals, if it ever was.