Is the carbon tax dead? Not yet, says this senator. 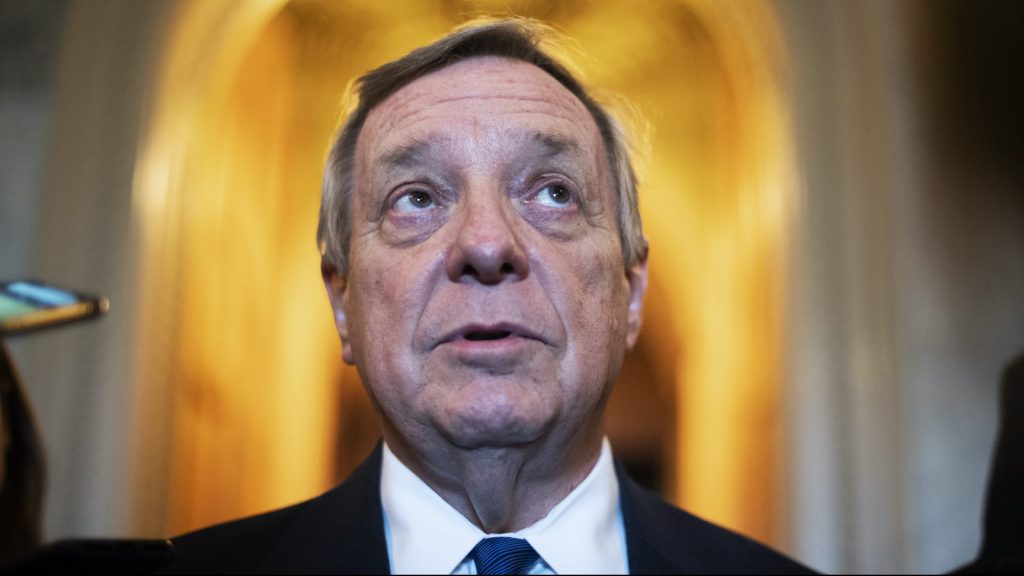 Senator Dick Durbin of Illinois talks with reporters in the Capitol before the Senate Policy luncheons in February. Tom Williams / CQ Roll Call
the tax man

Is the carbon tax dead? Not yet, says this senator.

For years, the idea of putting a price on carbon emissions seemed like a no-brainer — economists claimed that it would cut fossil fuel pollution quickly and efficiently, and at the same time, could even give money back to the American public. But lately the policy has fallen out of favor. Over the past few months, as Democrats have rolled out multiple comprehensive plans to slow down climate change and turbocharge renewable energy, the idea of a “carbon tax” has been notably absent.

One lawmaker doesn’t seem to have gotten the memo. On Friday, Senator Dick Durbin, a Democrat from Illinois, introduced the “America’s Clean Future Fund Act,” which would set a steadily rising price on carbon dioxide emissions. The tax would start at $25 per metric ton of emissions (that’s the equivalent of about 22 cents extra per gallon of gasoline) and rise by $10 or more per year. Given the COVID-19 economic downturn, the bill suggests waiting to institute the price until “the U.S. economy is no longer in economic turmoil due to the current pandemic,” but no later than 2023.

According to an analysis by the Center on Global Energy Policy at Columbia University, a majority of the funds raised by the tax would be returned to low- and middle-income households in the form of rebates — the rest would be used to create a green bank for investments in clean energy, to finance carbon sequestration projects in farms and forests, and to provide support for laid-off fossil fuel workers and communities at risk of sea-level rise or extreme weather.

“This bill is one piece of a comprehensive solution required to combat and protect against climate change,” Durbin said in a statement.

Previous carbon tax proposals haven’t made it very far. According to the Center for Climate and Energy Solutions, Durbin’s bill is the 10th carbon pricing bill proposed in Congress since 2018 — and four of them have had bipartisan sponsorship. Still, most Republicans haven’t shown much interest in climate legislation and, given the Republican-controlled Senate, none of these bills are likely to become law anytime soon. (In fact, the last viable attempt to pass a law with carbon pricing failed during the Obama Administration.)

Durbin’s bill stands in stark contrast to climate plans offered by former Vice President and presumptive Democratic presidential nominee Joe Biden as well as House Democrats. Biden’s plan, released last month, calls for $2 trillion in spending for clean energy initiatives and a transition to 100 percent clean electricity by 2035, but stops short of suggesting a carbon price. The House Select Committee on the Climate Crisis, meanwhile, released a 538-page plan that devoted just two caveat-filled pages to a potential tax on emissions. “Carbon pricing is not a silver bullet,” they warned, adding that any potential tax must benefit low- and middle-income Americans.

The newly introduced plan satisfies that requirement — and indicates that the carbon tax isn’t dead yet on the political left. Durbin is the second highest-ranking Democrat in the Senate, which means that his plan could get an airing if Democrats manage to take control of Congress. And even though history hasn’t been kind to the carbon tax — attempts to pass one in Washington State failed twice, in 2016 and 2018 — the idea is still favored by a majority of Americans.

That includes a cadre of former Republican lawmakers and statesmen, who in 2018, launched an effort calling for a tax with 100-percent of its profits going to American taxpayers. The idea made it into legislation introduced in the House by two Florida representatives, one from each party.

As to whether future Democratic legislators will back a carbon price, or go whole hog on clean energy spending and regulations, it’s hard to say. And anyway, the party will first have to win in November.