A prescription for a post-COVID economy: A national climate bank 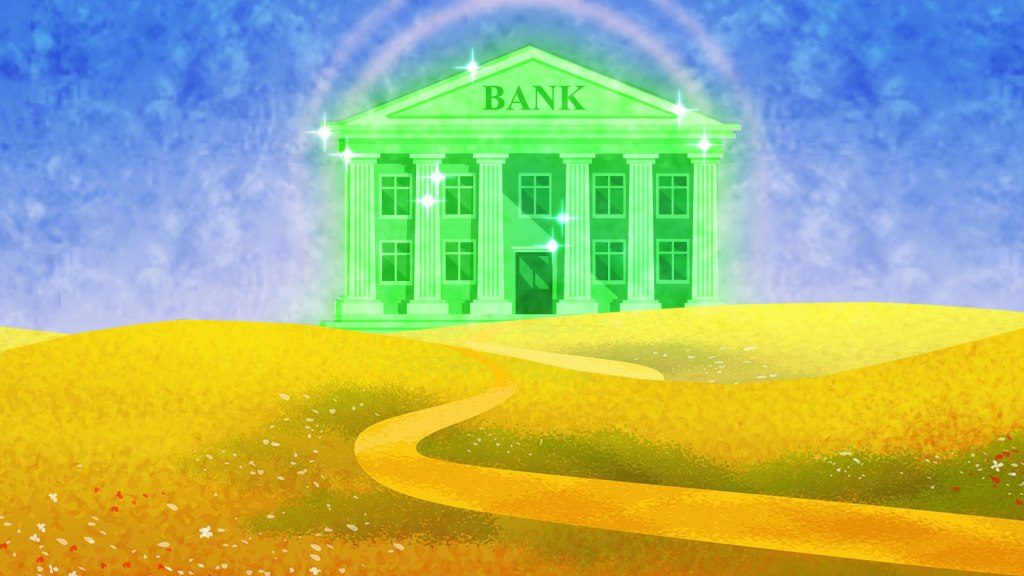 A prescription for a post-COVID economy: A national climate bank

When the Obama administration entered the White House in January 2009, the previous year’s financial crisis had sent the U.S. economy spiraling. Unemployment was on its way to peaking at about 10 percent, and the new president and Democrat-led Congress’s first job was sparking an economic recovery. Their hope was to put people back to work — while also accelerating a transition to a clean energy economy.

One of the ideas Congress considered at the time was launching a national “green bank,” a nonprofit institution that would use public money to help cash-strapped businesses invest in solar panels, wind farms, and energy-efficiency building retrofits. Green bank legislation gained traction that year, but it and other climate-related initiatives — most famously a cap-and-trade bill — ultimately never passed.

So green bank advocates turned their efforts to the states. Soon Connecticut, Florida, and Hawaii had launched their own specialized banks, using seed funding from the American Recovery and Reinvestment Act of 2009 to issue loans and bonds to local projects. Together, those programs have spurred billions of dollars’ worth of investments and supported tens of thousands of jobs, bank leaders say.

Today, as the COVID-19 pandemic catalyzes another economic meltdown — with an unemployment rate over 13 percent — the green bank concept is making a comeback. With nearly 600,000 clean energy positions lost in recent weeks, environmental advocates are among those again eyeing a recovery that includes significantly decarbonizing the American economy. And they say a federal green bank is a key element.

Sierra Club, for example, recently called for creating a National Climate Bank, as part of its green stimulus plan. The bank would invest $30 billion over its first five years to help boost renewable electricity capacity and add energy storage systems and transmission lines to the U.S. grid. At that scale, the bank could help create about 83,000 jobs per year, according to an estimate by the Political Economy Research Institute.

“We need to be investing for the long term,” said Ben Beachy, who directs Sierra Club’s living economy program. The bank, he explained, would fund various projects to improve poor air quality — which is tied to numerous health effects, like heart and lung disease, as well as complications from COVID-19. In addition, those investments would create “family-sustaining jobs and [help] us tackle the climate crisis,” Beach said.

The Sierra Club’s proposal builds on recent efforts by U.S. policymakers, as well as groups that advocate specifically for green banks, like the Coalition for Green Capital. A pair of bills in the House and Senate would, if passed, create a national bank that funnels money into regional projects and supports new and existing state banks. Democratic Representative Debbie Dingell of Michigan, who introduced the National Climate Bank Act in December, said she’s working to fold the bill into future rounds of stimulus spending — which to date has already totaled trillions of dollars. “It’s something that, as we restimulate the economy, could play a very critical part,” Dingell said earlier this spring.

Green recovery efforts almost certainly hinge on the Democrats winning at least the presidency in the upcoming election. President Trump has prioritized support for U.S. oil and gas companies. Meanwhile, in Congress, senior Republican leaders, like Kentucky Senator Mitch McConnell, have so far stymied attempts to include environmental provisions in coronavirus relief bills.

The latest green bank initiatives aren’t simply copy-and-pasted from the previous economic downturn. Advocates and state leaders say they’re working intentionally to ensure that green banks do more to include low- and moderate-income households and communities of color, which some state programs overlooked at first. That’s led to the new term, “climate bank,” which also reflects a more expansive view of the financial institution’s mission as one that includes restoring wetlands for climate adaptation or upgrading infrastructure that’s vulnerable to extreme weather events.

Over a dozen states and municipalities formed green banks after the last financial crisis. Connecticut was first out of the gate, launching its program in 2011.

At the time, many businesses were struggling to get financing or lines of credit from recession-wary lenders. The problem was particularly acute for developers of rooftop solar or green buildings — sectors that traditional investors at the time saw as risky and unproven. Green banks helped to fill some of those gaps. As nonprofit institutions they could reduce overall project costs by charging lower interest rates than commercial banks. By backing early-stage ventures, the banks aimed to offer a proof of principle, showing private lenders what’s possible so they would eventually warm to the investments.

The Connecticut Green Bank offered some of the first loans and leases for solar installations on homes and offices, a model that’s since proliferated nationwide. It established a financing program to help businesses install energy-efficient lighting and heating-and-cooling systems, upgrade leaky windows, and add renewable power. Recently, the bank began working to develop a “mini green bond” that allows residents to invest in local clean energy projects and receive returns of up to 5 percent.

The Connecticut bank’s funding comes primarily from a small surcharge tacked onto ratepayers’ monthly electric bills, as well as proceeds from the Regional Greenhouse Gas Initiative, a cap-and-trade initiative between 10 East Coast states. Private foundations and investors also contribute. While the state itself offers grants and rebates, too, the bank is intended to serve as a revolving pool of money; once loans are repaid, the replenished funds can support different ventures.

So far, the bank has mobilized nearly $1.7 billion of investments into the state’s economy, attracting seven private dollars for every public dollar it disburses, and helping create over 20,000 jobs, according to its own data.

Similarly, in Florida, the Solar and Energy Loan Fund, or SELF, provides microloans for residents who otherwise couldn’t get financing for sustainable home improvements due to barriers such as low credit scores. The program has financed over $12 million in projects, helping some 4,000 people install solar water heaters and solar panels or put hurricane shutters over windows. SELF is currently expanding to include affordable multi-family housing units in South Florida and to help homeowners replace aging septic and sewage systems.

“Many folks do not have access to traditional financing, so they’re forced to suffer the consequences or to rely on predatory lenders,” Doug Coward, the bank’s executive director, said on a recent conference call hosted by the Coalition for Green Capital. “The level of demand for access to affordable financing is significant,” he added, “and that was before the current crisis that we’re in now.”

Up north, Michigan’s green bank primarily helps residents to renovate homes and office buildings to reduce water and energy use — and thus costs. Michigan Saves has supported over $200 million in clean-energy financing in the last decade and served over 14,000 customers, according to the bank.

Mary Templeton, president and CEO of Michigan Saves, said she’s proud of the bank’s achievements, which includes supporting about 4,400 full-time jobs. But more work is needed to expand the program’s reach. “We see several gaps in affordable, accessible financing — especially for those who need it most, many of whom are in low-income communities and communities of color,” she said on the Coalition for Green Capital call.

Connecticut identified similar shortcomings around 2015, when the state’s green bank found that 80 percent of its solar loans were going to residents in wealthier communities.

“Those who are struggling with energy burden — where energy costs are [a higher percent] of your household’s budget — were the least likely to get residential rooftop solar,” Robert Klee told Grist. Klee was commissioner of Connecticut’s Department of Energy and Environmental Protection from 2014 to 2019 and also vice chairperson on the bank’s board.

To address the gap, Connecticut Green Bank partnered with the solar company PosiGen to develop more accessible financing models and deploy sales teams in underserved areas, including majority black and brown neighborhoods. Today new solar installations are more evenly divided among zip codes above and below the state’s median income.

“To me it was an important evolution. It’s not only figuring out how to get the private capital markets comfortable in a new technology, a new space,” Klee said. “Once it’s established for those people with perfect credit, can the green bank leverage its public money to help derisk the riskier pool?”

Green bank proponents say that, despite all the investments and projects, states are ultimately limited in what they can achieve on their own.

Bank directors report needing significantly more funding to help meet their state’s climate and energy targets. Yet many state governments have been strapped for cash in recent years, and now all 50 are facing reduced tax revenue due to the COVID-19 crisis. Such budget issues not only limit funding for clean energy but also leave programs vulnerable to the whims of policymakers. For instance, Connecticut’s legislature recently took nearly half the green bank’s operating budget to help balance a massive deficit in the state’s general fund.

A national green bank that funnels money into states could insulate programs somewhat from such budgetary pressures, according to Klee. “Having that national commitment would provide the right signal to the market, because markets actually get scared when governments raid things,” he said.

But taking the model nationwide will undoubtedly raise fresh questions about which types of energy projects to support, and how.

At the state level, local energy experts have pushed back against green bank proposals that favor loans over cash rebates and grants, which can be distributed quickly and often appeal to homeowners and businesses that don’t want to take on debt. An early effort in Rhode Island to join existing clean energy initiatives under a new green bank raised concerns among environmental leaders, who worried the one-stop-shop approach would wind up destroying or undermining otherwise successful programs.

Even if a national green bank proposal does succeed, it would still represent a tiny fraction of the level of spending required to reduce U.S. greenhouse gas emissions and meet global climate targets, said Robert Pollin, co-director of the Political Economy Research Institute.

Pollin was lead author of the report accompanying Sierra Club’s green stimulus plan, which had called for $30 billion in initial climate bank funding. Economists estimated the U.S. government should spend at least $600 billion annually over the next decade to transform the nation’s energy systems, upgrade infrastructure, and stimulate private-sector investment.

The $30 billion in proposed bank funding would come as “a nice, supportive down-payment” on taking on that transformative work, Pollin said: “Having a devoted climate bank is very valuable, and it enables us to build capacity and to have the wherewithal to understand projects.”