What stands in the way of all those climate plans? The election -- and the filibuster. 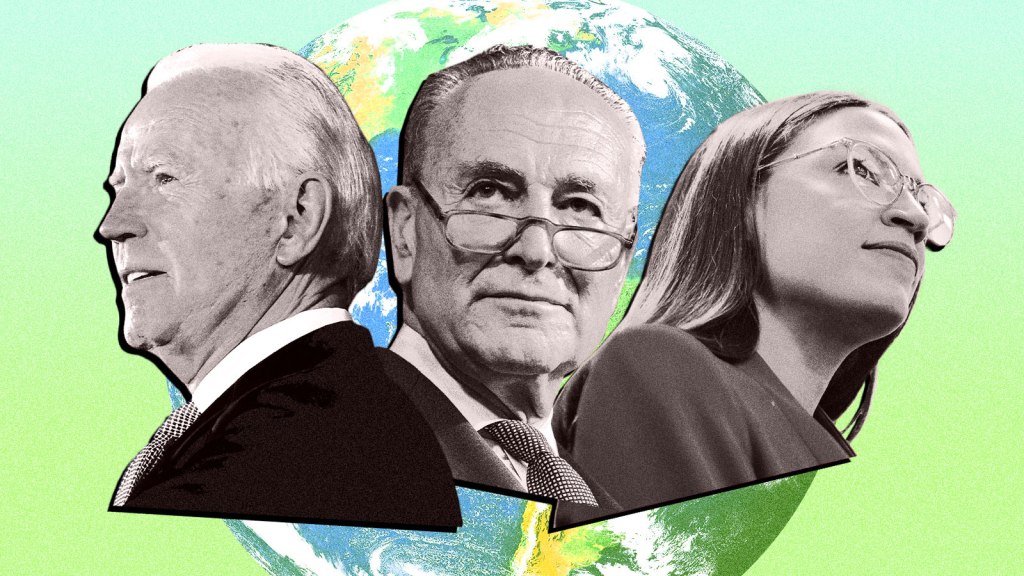 In the beginning, there was nothing. Then there were climate plans.

For over a decade, the federal government has done next to nothing to address one of the biggest issues of our time — a planet, coated in carbon pollution, that is steadily heating up. But after years of President Donald Trump gutting environmental laws and intra-party bickering, Democrats have suddenly released a deluge of plans aimed at tackling climate change. House Democrats have a climate plan. Joe Biden has a climate plan. A group of activists and policy wonks called the “Biden-Sanders Unity Task Force” have a climate plan.

The attack of the plans, as we might call it, is partly because it’s an election year, and everyone wants a say in the administration to come. The new proposals are as wide-ranging as they are ambitious: The House Climate Plan, for example, clocks in at 538 pages and covers everything from upgrading the country’s internet to partnering with Native American tribes to jump-start clean energy. Biden hopes to spend $2 trillion on green programs and cut emissions from the electricity sector to zero by 2035.

But amid all the excitement over these actual, tangible plans, Democrats might need a reality check: Could any of these plans truly become law during a Biden administration? The answer may have to do with some ancient Senate rules — and a future president’s willingness to buck them.

The not-so-hidden truth about any ambitious proposal is that it requires the cooperation of a massive, slow-moving, 230-year old institution: the United States Congress. Even if Biden is elected president in November (not a sure thing, despite his persistent lead in the polls), any comprehensive climate bill that includes massive federal spending and strict electricity standards will need widespread support from members of Congress who don’t necessarily consider climate change a priority.

The House of Representatives is currently looking pretty climate-friendly: House Democrats control 232 seats to Republicans’ 197. The Democratic Party is expected to hold onto that majority in the coming election, but, in a country with surging cases of COVID-19 and near-daily changes in political winds, that’s also not a certainty.

The Senate, however, is a different story. Right now, Republicans hold 53 seats to Democrats’ 47 (including two independents), and so the party that recently coalesced around Biden will have to take over three or four Republican seats to seize control. The thing is, of the 35 Senate spots up for grabs in 2020, only five (currently all held by Republicans) are considered hotly contested. Without at least three of those, it’s safe to say that we won’t see any landmark climate legislation in the next four years.

And if Democrats do manage to take the Senate, there will still be a giant hurdle ahead: the Senate filibuster, a centuries-old rule that allows the minority party to block progress on bills. Once upon a time, filibustering required senators to talk constantly, forgoing bathroom breaks and fighting off exhaustion. Think Jimmy Stewart in Mr. Smith Goes to Washington. Nowadays, they just have to declare the intention to filibuster, and bills are dead in the water. It has been deployed more and more frequently in recent years, essentially preventing passage of anything that does not have a filibuster-proof supermajority of 60 votes.

The filibuster was partly responsible for the failure of the Democrats’ last attempt at capping carbon emissions, the 2009 Waxman-Markey Act. The bill passed in the House, but was never brought to the floor of the Senate. “It’s easy to count to 60,” said Senator Harry Reid from Nevada, the majority leader at the time. “It’s easy to count to 60. We know we don’t have the votes.”

So to pass big climate legislation, Democrats would have to corral seven to 10 Republican senators, which looks next to impossible in the current political climate. “It doesn’t make me happy to say this, but I don’t think that they [Democrats] can count on any Republican support on this,” said Greg Dotson, a former Congressional staffer during the Obama Administration and a law professor at the University of Oregon. Some Republicans have been getting on board with climate action, but so far, the party of Trump has been loath to endorse any pro-environment policy besides planting a trillion trees.

That’s why some have argued that the best way to fight climate change is to scrap the filibuster entirely — a move that would only require a simple majority. “Democrats should get rid of the arcane, dilapidated, outdated, and antiquated filibuster,” Sam Ricketts, a senior fellow at the Center for American Progress who helped write Washington state Governor Jay Inslee’s climate plan, told Grist. The rule, he added, should “go the way of the dodo.”

Even Biden, who spent 36 years in the Senate and is a fan of the filibuster, might be willing to give the rule a second look. In comments to journalists last week, he signaled openness to ditching the need for a supermajority, if Senate Republicans were too “obstreperous” in their use of it to block legislation. Senator Chuck Schumer from New York, the current Senate minority leader, also said on Tuesday that, with regard to abolishing the filibuster, “nothing is off the table.”

Still, there’s a reason that ditching the filibuster is considered the “nuclear option.” It would seriously curtail the minority party’s ability to check the majority, and if Congress swings Republican in future years, Democrats might wish they had left it alone.

There might be a way to avoid going nuclear: the process thrillingly known as “budget reconciliation.” “If the majority is not filibuster-proof, and the filibuster remains in effect, then it’s going to be really tempting to look at reconciliation,” Dotson said. Another arcane Senate rule, it allows the Senate to pass one bill a year without a 60-vote supermajority, as long as it relates to federal spending and won’t increase the deficit over a 10-year period. In theory, that suggests many big climate goals are off the table, but Dotson said that a creative Senate majority could try to stretch and mold climate priorities so that they relate to the budget. Even Biden’s biggest goal — a mandate for nationwide 100 percent renewable electricity by 2035 — could potentially be massaged into a policy that could be passed through reconciliation.

Ricketts agrees. “Reconciliation rules are more art than science,” he said. Unfortunately, reconciliation depends on the decisions of the parliamentarian, an officer whose job it is to enforce the rules and procedures of the Senate, and it’s hard to guess how she might respond to stretching the rules. Even so, it “has been used in the past to pass truly transformative legislation,” Ricketts said. “It’s not to be overlooked.”

David Konisky, a professor of political science at Indiana University, said that Democrats could also choose to break their plans up into lots of smaller pieces, and shoehorn them through Congress that way — but that option is also risky, as the most crucial policies for reducing emissions could be left on the cutting-room floor. “It’s hard to know how we go from these plans to legislation,” he said. “There’s a lot of time and a lot of politics that will happen in the interim.”

Given all this potential for Congressional wrangling, how should we think about the sudden deluge of Democratic climate plans? According to Konisky, these sweeping policy proposals aren’t necessarily intended to become legislation, or even be voted on by Congress. “These plans are trying to appeal to voters, to activists, to people who are going to be potentially mobilized to help win elections,” he said. “They’re designed to appeal to the most important constituency that all potential candidates for office have.”

That’s actually the good news for those who think the time to act on climate change is way past due. Even as a pandemic ravages the country, concern over climate change has reached a record high, with activists pushing for both a Green New Deal and a green recovery from the coronavirus. After more than a decade of federal inaction on global warming, the country is still a long way from meaningful climate policy, but it’s a lot closer than it was: Democrats finally have (a whole bunch of) climate plans.