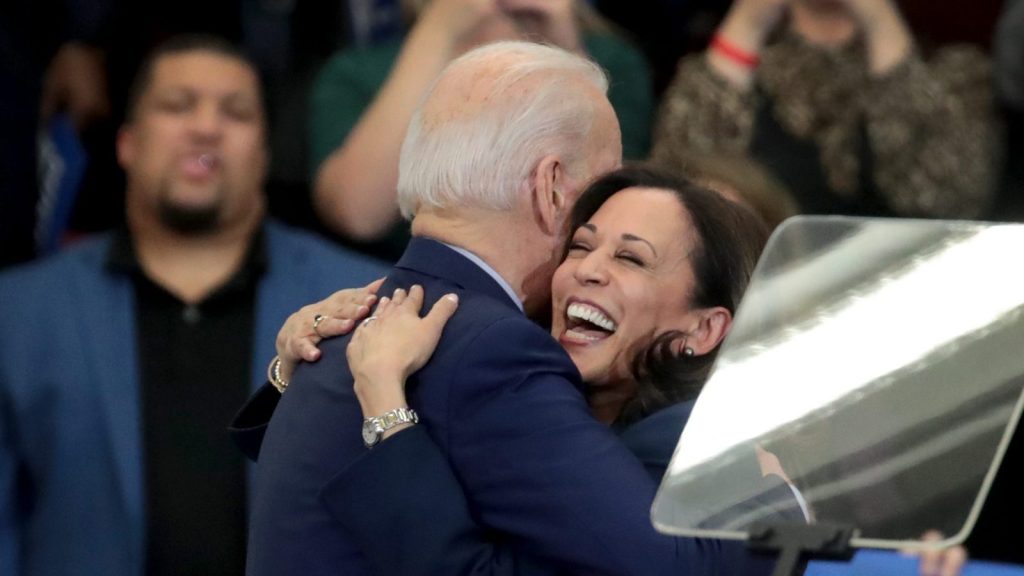 Presumptive Democratic presidential nominee Joe Biden has picked Senator Kamala Harris of California to be his running mate. Harris beat out a long list of qualified women for the spot — Senator Elizabeth Warren of Massachusetts, former national security adviser Susan Rice, Michigan governor Gretchen Whitmer, and others were in the running. Biden’s decision to pick a woman of color sends the signal that the former vice president is serious about issues of racial and gender inequity … and about energizing voters who care deeply about representation. What does his decision mean for climate and environmental policy in a Biden administration?

Harris — formerly the district attorney for the city of San Francisco and the attorney general of California — has been known to be somewhat of a political chameleon. Her once-promising presidential campaign failed in part because of Harris’s inability to nail down her political ideology. But, over time, the Democrat has become increasingly firm in her commitment to one particular issue: environmental justice.

When Harris was running for president in 2019, she released a climate plan that put environmental justice front and center. Last July, she and Representative Alexandria Ocasio-Cortez of New York unveiled a plan to introduce climate legislation in Congress that would ensure new environmental regulations and legislation get evaluated through an environmental justice lens before becoming law. Last week, the two Democrats made good on that plan by formally introducing legislation called the Climate Equity Act. The act would set up a new Office of Climate and Environmental Justice Accountability within the Office of Management and Budget.

A week prior to that announcement, Harris introduced another piece of climate legislation in the Senate: a companion bill to the Environmental Justice for All Act introduced earlier this year in the House of Representatives by Democrats A. Donald McEachin of Virginia and Raúl M. Grijalva of Arizona. In an email interview with Grist ahead of the introduction of that bill, the senator explained why environmental justice is so important to her. “Our country is in the midst of multiple crises,” Harris told Grist:

First, there’s the public health crisis caused by the coronavirus that has killed over 148,000 people. It disproportionately affects Black and brown people in part due to the high frequency of pre-existing conditions like asthma and high blood pressure. These can stem from decades of toxic pollution being dumped in communities of color and which place people at higher risk of complications. Meanwhile, there is the continuing crisis of systemic racism in America that people of color have known and experienced for generations. All of these things intersect, and we must center the fight for environmental justice in the broader conversation.

Harris’ commitment to this kind of work dates back to her days as a district attorney. In 2005, she created a mini version of the Office of Climate and Environmental Justice Accountability she’s proposing now within the San Francisco district attorney’s office. “Crimes against the environment are crimes against communities, people who are often poor and disenfranchised,” she said at the time.

In short, she’s got a good record on justice that’s getting better and better. That could serve Biden well as he continues to hash out his climate plans in the months leading up to the election. He’s already introduced a more comprehensive and equitable version of his initial climate plan and sought input from an array of formal and informal climate advisors from many different corners of the climate movement, including environmental justice advocates. Harris will no doubt continue to steer his campaign in a justice-friendly direction. She also supports abolishing the filibuster, a step that will likely be necessary to get any climate or environmental policy through Congress in a Biden administration.

Harris isn’t quite a climate activist’s dream. She was one of the last Democrats running for president to release a climate plan last year, lagging far behind other candidates like Elizabeth Warren and Jay Inslee. Her plan did not include a full ban on fracking unlike some of her competitors’ plans, and she has taken donations from the fossil fuel industry in the past, though she did take a vow not to accept donations from fossil fuel companies this election cycle.

But Harris’s proximity to rising temperatures may be another indication that the senator would take climate change seriously as vice president. Harris is the first person from a state west of Texas to appear on a Democratic presidential ticket, and she has come up against the effects of climate change firsthand in California, where wildfires, rising sea levels, and drought are near-constant sources of concern. As a result, her state has become a leader of the charge to tackle rising emissions in the United States. Let’s hope Harris brings a little bit of that urgency to the ticket.