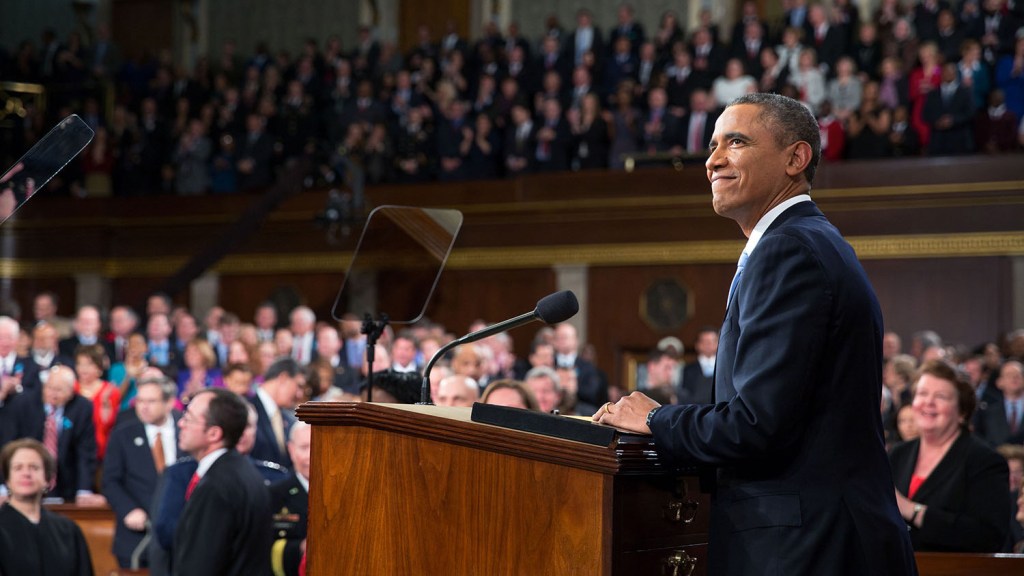 Obama’s seventh-year State of the Union speech had a valedictory feel to it. There are multiple ways to read the speech’s key line — “Tonight, we turn the page” — but one of them is that any chance for Obama to have the presidency he originally envisioned is finally and entirely over. He wanted to transcend partisan and racial divisions, to bring people together to solve common problems. It was the premise of his political career. And it was a nice idea. But it was not meant to be. Republicans decided, before he was even sworn in, to deny him all cooperation as a matter of bedrock strategy.

Even after the midterms of 2010 left the Tea Party in control of the GOP, Obama did not give up the dream. He offered deficit cuts and tax cuts, deported immigrants, boosted shale gas, froze domestic spending, rejected EPA’s initial ozone rule, tried to offer terms of compromise and met only a blank wall of opposition.

The 2014 midterm elections killed the dream once and for all. There are now essentially no circumstances in which the GOP would compromise with Obama to pass legislation amenable to both sides, not while they control Congress and are jostling for control of the White House in 2016. They rightly understand that it would be seen as an accomplishment for Obama and a boost for Hillary.

So, in his first two years, Obama got what he could from a Democratic Congress. Here in the last two, he will get what he can get from executive action. When the history of his presidency is written, the GOP will play no role other than anchor.

Now that Obama’s got nothing to lose, he has loosened up and gotten bolder. His “lame duck” period has been a frenzy of action, from EPA to immigration to Cuba to net neutrality to community college to civil asset forfeiture. Since the GOP has no credible threats to leverage against him, there’s no reason to fear the inevitable high dudgeon of conservative pols and pundits. The only things that will get done are the things he does himself, so he’s doing stuff.

The page has also turned in the sense that the twin crises Obama inherited — the economic downturn and two endless, fruitless wars — are finally wrapping up, though of course millions continue to suffer the effects of both. The economy is recovering and the Democrats’ attention is turning to wages and investment. The bulk of U.S. forces has been withdrawn from Iraq and Afghanistan. Though turmoil over terrorism remains, Obama feels confident counseling patience and prudence in foreign policy.

Since there’s no realistic prospect of legislation passing, Obama’s SOTU legislative agenda can mostly be viewed as a preview of 2016. He’s not asking the GOP for anything, and that freed him up to be more sharply combative and critical.

On the minimum wage: “To everyone in this Congress who still refuses to raise the minimum wage, I say this: If you truly believe you could work full-time and support a family on less than $15,000 a year, try it. If not, vote to give millions of the hardest-working people in America a raise.”

On infrastructure and Keystone: “Twenty-first century businesses need 21st century infrastructure — modern ports, and stronger bridges, faster trains and the fastest Internet. Democrats and Republicans used to agree on this. So let’s set our sights higher than a single oil pipeline.”

There was this, which was impromptu, not in the prepared speech: “I have no more campaigns to run. (Applause.) My only agenda … (laughter) … I know because I won both of them.” Zing!

And this, on climate change: “I’ve heard some folks try to dodge the evidence by saying they’re not scientists; that we don’t have enough information to act. Well, I’m not a scientist, either. But you know what, I know a lot of really good scientists at NASA, and at NOAA, and at our major universities.” (Prediction: You won’t be hearing “I’m not a scientist” much any more.)

And speaking of climate change.

I know some greens were disappointed that Obama leaned so hard on high domestic oil and gas production — “all of the above,” though he never said those words — but it’s worth noting that it was muted relative to previous years. Energy policy got one paragraph, oil and gas one line in it, wind and solar one line each. Entirely unmentioned were natural gas, nuclear, and “clean coal.”

Climate change, on the other hand, got several paragraphs. I’m too lazy to word-count, but my impression was that it got more time than any other single problem outside terrorism. As Ben notes, Obama didn’t propose any grand new legislation, but he did all-but-explicitly threaten to veto any attempts to block his current executive agenda.

More than that, the time he spent on it reinforced that it is one of the great unfinished tasks of his presidency, something all future presidents must grapple with. “The Pentagon says that climate change poses immediate risks to our national security,” he said. “We should act like it.”

It is increasingly seen as ignorant and unsophisticated to openly deny climate science, which is why Republicans are scrambling for a new position on the issue, so far fruitlessly. (Needless to say, Republican SOTU respondent Joni Ernst didn’t mention it.) I doubt Obama played much of a role in the cultural shift against climate denial, but he did support it, explicitly standing up for the science in several successive SOTUs.

Climate policy, for now, is not a bipartisan issue. Republicans refuse to participate, so all that can be done is what Democrats do. Obama now clearly realizes that and is taking action. In fact, climate change may be the problem that benefits most from the death of Obama’s bipartisan dreams.