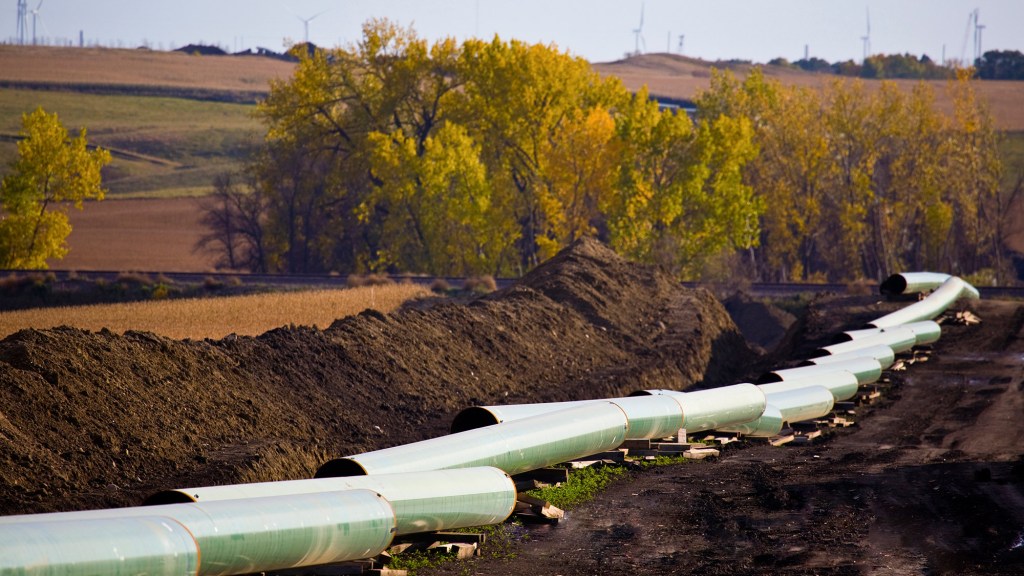 The Keystone Oil Pipeline is pictured under construction in North Dakota in this undated photograph released on Jan. 18, 2012. Reuters/TransCanada Corporation
Politics

WASHINGTON –- The newly weakened Senate Democratic caucus is trying to muster all the opposition it can to the impending vote on the Keystone XL pipeline.

Sens. John Hoeven (R-N.D.) and Joe Manchin (D-W.Va.) introduced legislation on Tuesday that would force the federal government to approve the pipeline, the first bill of the new Senate. The bill has 60 co-sponsors, including six Democrats, and its authors say they are confident they can get at least three other Democratic votes. That’s more than enough votes to approve the bill in the Senate, though it’s not enough to override an impending presidential veto.

But Senate Democrats who oppose the pipeline are trying to figure out what they can do to make it more difficult to pass the legislation -– or, if not, at least score a few points in the process.

“The first test of the 114th Congress is what kind of fight the Democratic caucus has in them,” said a Democratic aide, speaking on background in order to be able to talk more freely. “Do we want to simply hand over votes to [Majority Leader Mitch] McConnell for his agenda, or do we want to show that Democratic votes need to be earned?”

Those Democrats appear to be doing their best to make the Keystone vote difficult. The Senate Energy and Natural Resources Committee had scheduled a hearing on the bill for Wednesday morning, and a markup of the bill for Thursday morning. But Minority Whip Dick Durbin (D-Ill.) objected to the hearing, noting on the Senate floor Tuesday that legislation providing for the structure of committees was not anticipated until the following day.

“I say to the Majority Leader we will continue this conversation in a positive manner in an effort to come up with a mutually agreeable approach to considering this legislation and others,” Durbin said, “but for that reason I must object.”

Meanwhile, McConnell accelerated the process of bringing the legislation for a vote. The Kentucky Republican invoked a Senate rule that allows a bill to go directly to the floor without having to first go through a committee process for amendments. Republicans say, however, that they still intend for the bill to go through the Energy and Natural Resources Committee. Sen. John Cornyn (R-Texas) told Roll Call that they simply started the process to avoid “too much delay” and would likely substitute the amended bill for the floor vote, which is expected to come next week.

Don Stewart, a spokesman for McConnell, confirmed as much to The Huffington Post. “We will still go through regular order and take up the Keystone bill that the committee reports,” he said.

But Democrats balked at this procedural move. “By moving to bypass committees on the first bill of the new Congress Senator McConnell is signaling that his promises of regular order have already expired, and that he sees committees as nothing more than rubber stamps for Republican leadership,” said Adam Jentleson, spokesman for Minority Leader Harry Reid (D-Nev.), in a statement.

Meanwhile, Democrats are planning their amendments to the Keystone bill. Sen. Chuck Schumer (D-N.Y.), who chairs the Democratic Policy and Communications Center, and Sen. Debbie Stabenow (D-Mich.), the DPCC vice chair, sent a letter to their colleagues proposing five amendments to offer to the bill. These include a measure to prohibit oil transported through the pipeline from being shipped abroad, as well as a measure that would bar TransCanada, the would-be pipeline builder, from using eminent domain to access land in the proposed pipeline route.

“The Republicans have promised an open amendment process, and that is exactly what they’re going to get,” said Sen. Sheldon Whitehouse (D-R.I.), in an interview with HuffPost on Tuesday. The amendments, Whitehouse said, “give us the opportunity to highlight the dramatic difference between where the American public is on climate issues, and where the fossil-fuel-funded Republican Party is on those same issues.”

While they aren’t likely to win this fight –- the bill is expected to have enough supporters to pass — Whitehouse painted the effort as part of a long game for Democrats. “The more this conversation plays out in front of the public, the better off we are,” he said. “This is a struggle that we win as it becomes increasingly apparent to the American public that the Republican Party in Congress has become disconnected with reality.”

The House plans to vote Friday on its own bill to approve the Keystone XL pipeline. In the last Congress, the House passed legislation approving the pipeline nine times.

White House Press Secretary Josh Earnest said Tuesday that President Barack Obama would veto the Keystone legislation if it came to his desk. The bill, Earnest said, “would undermine what has traditionally been, and is, a well-established administrative process to determine whether or not this project is in the national interest.”

The White House has delayed its own evaluation of the pipeline until the Nebraska Supreme Court issues a decision on whether the proposed route through the state is valid. That decision could come as soon as Friday.