The environment under President Trump 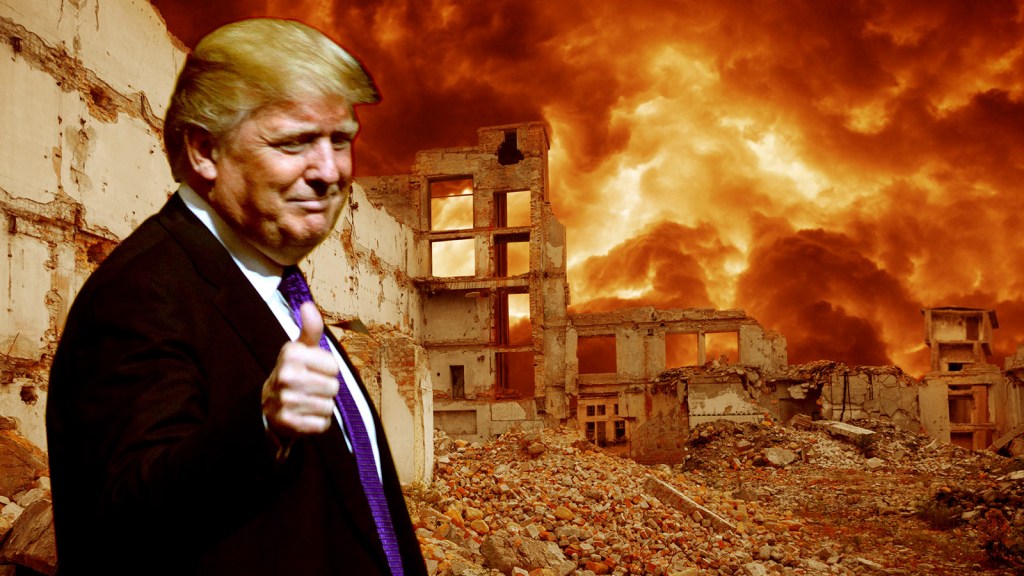 The environment under President Trump

It’s April 30, 2017: Day 100 of President Donald Trump’s first hundred days. The champagne floweth, the Wall is under construction, and now we’re more or less federally mandated to refer to 1600 Pennsylvania as the Gold House. The president’s bombastic governance is buoyed by a comfortable Republican congressional majority. After the Senate blockaded Barack Obama’s Supreme Court nominee in 2016, it confirmed a jubilant Ted Cruz, who has only cemented far-right ideology in the justice system. The GOP has had a busy hundred days. This is patriot country.

Most people don’t really talk about the environment anymore. The last time a journalist tried to ask Press Secretary Sean Hannity a question about climate change, she was booted from the briefing room. We can talk about land, though. With a real estate developer for president, we spend a lot of time talking about land.

Under the fast-tracked Business Opportunities for Appalachia Act (BOFA), mountaintop removal mining has now decimated something on the order of 60 percent of the peaks in Central Appalachia. During late January’s fire sale of the American West, the private sector scooped up all but a fraction of the land previously owned by the federal government. Upwards of 15 percent of the leases are reportedly held by the blind trust that currently controls the Trump Organization’s assets.

Miles of the Pacific Northwest coastline are unrecognizable — it turns out we needed a couple more good swathes of land to host burgeoning U.S. crude exports to Asia — but hey, the Gold House lawn looks great. And besides, Seattle’s got it easy compared to Oakland, which is now just one large coal export terminal.

How’d we end up here? Well, what you have to understand is that a lot happened at once. President Trump moves without hesitation.

If we’re going to start with something, though, it probably began with the Paris climate change agreement the world was so happy to adopt in 2015. One of the first things that occurred after inauguration day was the United States’ withdrawal from the Paris Agreement. This didn’t bode well for international climate action writ large. Without the U.S. on board, China and India pulled out, citing uncertain economic times ahead, leaving the European Union to try and salvage a neutered deal. Sure, the U.S. was broadly condemned, but with OPEC’s mid-2016 restrictions on oil supply and an uptick in the price of Gulf crude, cheap American oil sounded pretty good to China, which was happy to help finance those shiny new Pacific Northwest oil export terminals. They went up pretty quick, and that was enough to keep the president happy.

After the president pulled out of the Paris Agreement, Congress swiftly, predictably, rolled back the Clean Power Plan for curbing carbon pollution from power plants and the Obama administration’s updated methane rules for cutting leakage from landfills and the oil and gas sector. Trump, flanked by coal executives amid much fanfare, signed the legislation. (This was before the dismantling of the EPA, but we’ll get to that later. We’ve only made it to early February.) Either way, with a new originalist on the bench, SCOTUS was bound to strike down the power plant regulations anyway.

Early March is around when things really started to get interesting.

Reinvigorated by a friendly business climate and overt federal support, Shell has begun preparations to head north. Very north. A global scramble for Arctic oil, currently in full tilt, is only avoiding escalation because of the president’s cozy relationship with Vladimir Putin (and the worldwide acknowledgement that the States’ indiscriminate bombing of Syrian, Iranian, and Iraqi oil supply chains has actually left Arctic oil with one of the lowest risk profiles).

Speaking of Russia, Vice President Sarah Palin recently returned from her first state visit to Moscow, where she, Fred Singer (her chief of staff), and U.S. Trade Representative Carl Icahn (everyone thought he’d been pegged for Treasury!) punched out the first unofficial draft of a new public-private partnership incentive program aimed almost exclusively at international oil pipeline construction. Keystone XL, now back on track, was small potatoes compared to the Big and Tall versions on the horizon. Between the vice president’s program and President Trump’s invocation of eminent domain in more or less whatever direction his eyeballs are swiveled, pipelines are effectively the new highways. (Don’t worry about the highways, though. Secretary of Transportation Chris Christie has made sure to prioritize highway funding over bicycle- and pedestrian-friendly transport.)

Sure, there’s the whole climate change thing, and of course, academics and non-profit types remain today at near-nuclear war with the government on all things coal, oil, and gas; but the new U.S. moratorium on climate science research makes it difficult to put forth any new arguments.

Then there was mid-March’s spike in oil train explosions. You couldn’t really blame the GOP for that one, but environmentalists did anyway. The probability of an oil train explosion remained constant, but with more fracked oil came more trains. (As well as subsidies for private sector fire departments. It has become abundantly clear that we’ll need a lot more fire departments to deal with a rather unprecedented uptick in railway explosions.)

Of course, nobody, Republicans included, was really sure what would happen when Trump dismantled the Environmental Protection Agency. It kinda just happened in one of his fits of rage, and we’re frankly still sorting that one out. It turns out that the first thing that happens when you shutter an agency is that its 15,000 employees get angry. The next thing that happens is that the private sector steps in for the purpose of “economically efficient environmental protection.” EnviProtect Systems, which now holds a near monopoly on pipeline-spill cleanup and gas-leak plugging, was rumored just this month to be pondering a bottled-water business play. Fracking contamination has been a boon for private-sector water.

This is, of course, to say nothing of the elimination of the Department of Energy and the drastically curtailed purview of the Bureau of Land Management, but there’s probably not time to dive into the intricacies of Interior Secretary Rand Paul’s days. Suffice it to say that the man works long hours.

And the climate is still changing, but don’t tell Sean Hannity I said that.