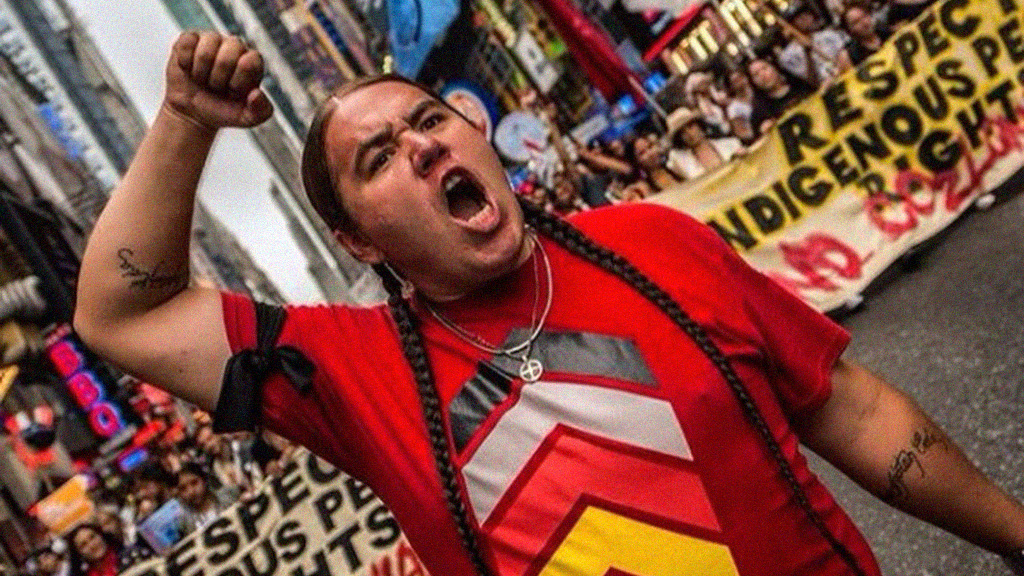 You might have seen the video last week: the one where Sen. Elizabeth Warren declares that the effort to push the Keystone XL pipeline through the Senate has failed. At that moment, a loud ululating sound emanates from somewhere off camera in the Senate chamber. Warren looks up in consternation.

It takes a while to register that this is a Native American chant. It’s doubtful that Warren even realizes it. Certainly no one in Congress actually understands it. Warren looks uncomfortable, and shouts “Order in the gallery” until the noise stops.

The noise stops because the Capitol police have identified the singer — Greg Grey Cloud, member of the Crow Creek Sioux Tribe, co-founder of Wica Agli — and arrested him.

The video of Warren reacting to the chant goes viral. A few news outlets write about it — the chant turns out to be the unci maka wiwayang wacipi song, which, far from being some super-ancient piece of Native American lore, was written to protest coal mining just a few years ago by a guy named Howard Bad Hand.

None of the articles, however, is as charming as the interview with Grey Cloud that ran in Indian Country Today a few days ago. Grey Cloud may be a man of ideals, but he’s not going to be unnecessarily serious about it.

Indian Country Today  So, um, seriously what the hell were you thinking?

Greg Man bro, honestly?! I thought if these fools pass this bill, I’m going to belt out a wicked counting coup, calling-the-warriors song! Then it didn’t pass! Bro, I was overwhelmed with joy and relief! Goosebumps crawled up my arms and I thought to myself, SING! Sing you fool! Honor these leaders who stood up for the people!

Indian Country Today  Be honest, were you just having a Flashdance moment — you know, “What a feeling …”?

Greg Haha, I just stood up, put my proud warrior face on and blasted one out! It WAS quite the feeling moment haha!

In the U.S., the Native American profile in the movement against fossil fuels hasn’t been as high profile — except for a few groups, like the Cowboy & Indian Alliance (which Grey Cloud gives a shout-out to in his interview).

So I’m going to add Grey Cloud to my list of folks to thank on this holiday. In a better America, it wouldn’t be so strange to hear a Native American chant in the halls of Congress — whether or not it was out of order.