Trump is sneaking environmental rollbacks past a nation in quarantine 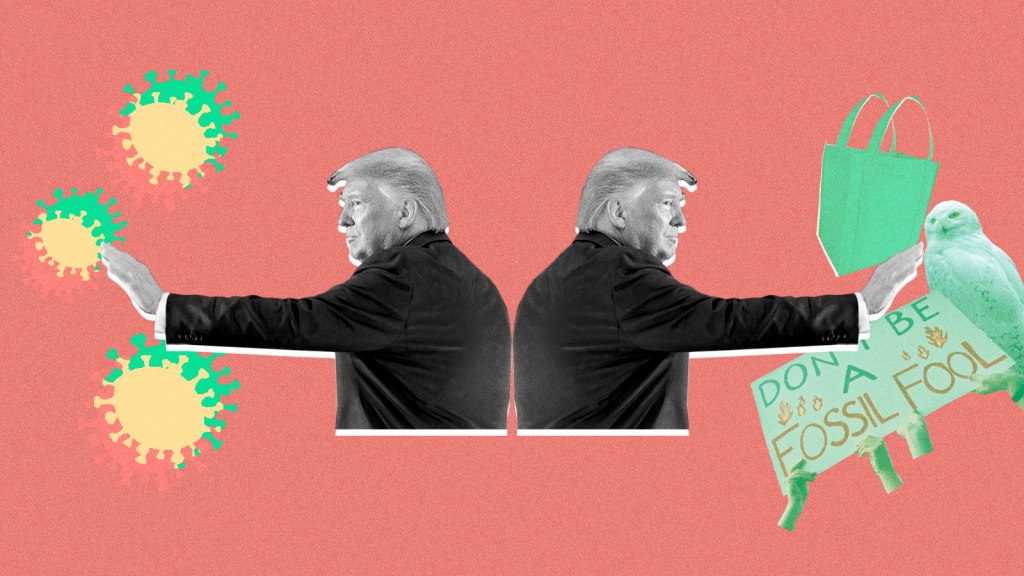 Grist / Janine Lamontagne / Getty Images
while you were sheltering

Trump is sneaking environmental rollbacks past a nation in quarantine

In the weeks since the novel coronavirus began its exponential spread across America, schools have closed; churches, synagogues, and mosques have canceled services; and non-essential businesses have shuttered. The U.S. economy has ground to a halt. But the Trump administration and some state governments are still going full steam ahead on rolling back environmental protections.

So what’s been happening while we’ve been sheltering in place? A whole lot. “Consistent” isn’t generally a word used to describe this president, but Trump has been nothing if not consistent in his commitment to ensuring unfettered freedom for big polluters.

On Tuesday, Trump’s Environmental Protection Agency put the nail in the coffin of President Obama’s 2012 rule aimed at curbing auto emissions. That rule would have required automakers to improve the fuel economy standards of their cars and light fleet trucks to by 5 percent on average a year. Trump’s new rule will only require them to raise those standards by 1.5 percent annually. For an idea of how easy Trump has made life for automakers, the industry has said it would boost standards 2.4 per year sans regulation.

Trump says the Safer Affordable Fuel-Efficient Vehicles rule will make new cars cheaper and bolster auto manufacturers in the midst of the coronavirus pandemic. But loosening restrictions on automakers will lead to a billion more tons of carbon dioxide emitted and 80 billion more gallons of gasoline consumed cars over the course of their lifetimes. California is currently in a courtroom tussle with the EPA over a waiver that would allow the state to sidestep Trump’s rule and continue imposing stricter tailpipe emissions rules on vehicles driven in its jurisdiction.

Speaking of the EPA, the agency, helmed by former coal lobbyist Andrew Wheeler, is steadily moving forward with other rollbacks. Among them, a rule that could hobble future federal health regulations by limiting the studies regulators can use in the rulemaking process. Wheeler says the agency’s new rule to require disclosure of the raw data behind scientific studies used by the government to make regulations will increase transparency. Health experts argue it’ll exclude key studies that rely on confidential medical data.

Not content to move ahead with rollbacks that were already in the works, the EPA is also using the coronavirus as an excuse to let polluters loose on the playground. Last week, the agency announced it was going to let facilities like power plants and factories regulate themselves during the pandemic. The EPA will not issue fines for some air, water, and hazardous waste violations, and that loosening of restrictions will take retroactive effect going back to March 13. Companies should “act responsibly,” according to the EPA. Fat chance.

At the Department of the Interior, a similar saga is playing out. Last week, the department refused to extend the public comment period on its proposed reinterpretation of the Migratory Bird Treaty Act, a 1918 rule protecting more than 800 avian species. The agency also kept moving along plans this month to consider drilling projects on previously protected lands in Alaska and New Mexico, and is continuing oil and gas drilling lease auctions apace.

States are getting in on the deregulatory action, too. Over the past two weeks, Kentucky, South Dakota, and West Virginia quietly passed laws that would penalize pipeline protesters. Under the new state laws, fossil fuel infrastructure like the Dakota Access Pipeline are designated “critical infrastructure” or “key infrastructure assets.” Causing damage above a certain dollar amount or tampering with those assets could now lead to felony charges.

Meanwhile, the governors of New Hampshire, Massachusetts, and Illinois have already temporarily banned or officially discouraged reusable bags in grocery stores, and Maine’s plastic bag ban is being postponed until January 2021. Republican officials arguing against efforts to limit plastic pollution are taking talking points from the plastics industry. The president of the Plastic Industries Association recently said, “As the coronavirus spreads across the country, single-use plastics will only become more vital.” But the science behind the assertion that plastic bags spread the virus is thin, and a recent study showed the virus is still viable on plastic surfaces after 72 hours.

It’s clear that the coronavirus crisis has handed Trump and conservative state lawmakers a once-in-a-lifetime opportunity to do away with environmental protections they find too burdensome. Too bad social distancing isn’t effective for pollution.