Voter ID laws are screwing the planet, too 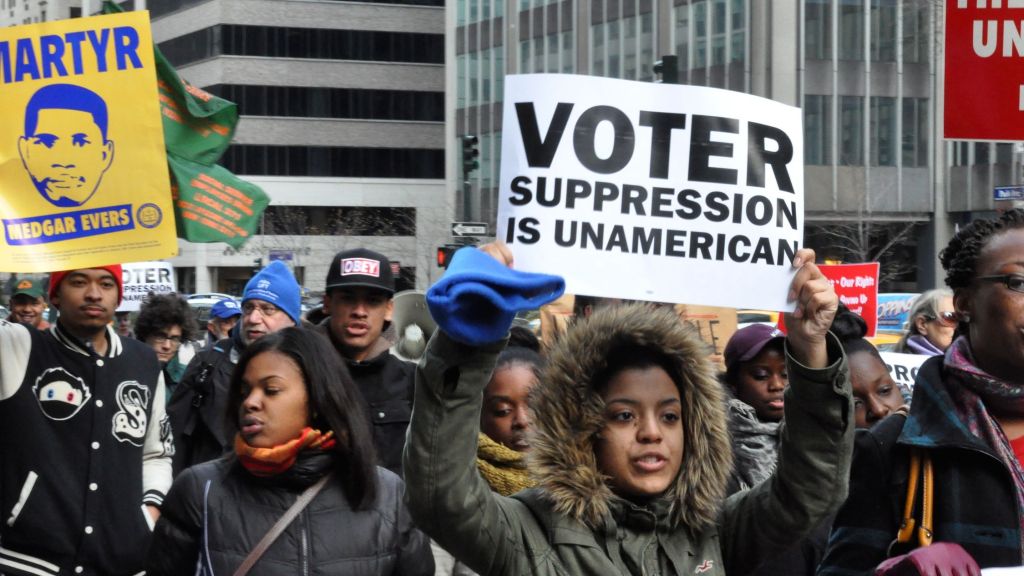 Voter ID laws are screwing the planet, too

The U.S. Supreme Court refused to hear a case this week that questions the constitutionality of Wisconsin’s voter ID law, passed in 2011. The case, filed on behalf of a group of civil rights organizations and state residents, claims that the law discriminates against those who don’t hold a certain kind of photo ID. Dozens of residents have testified that they can’t get this kind of ID because they don’t have a birth certificate or other legal documents. Experts estimate that roughly 300,000 state residents, mostly black and Latino, would be burdened by the law, which is a violation of the constitution.

“Today’s announcement from the Supreme Court is disheartening to all who believe in the values of a just democracy,” said Rev. Michelle Yvette Townsend de López, lead pastor of Milwaukee’s Cross Lutheran Church in a statement. “After earlier generations fought for voting rights, the Supreme Court’s failure to intervene to hear and possibly halt this discriminatory law — the modern-day version of Jim Crow — is discouraging.”

Environmentalists in the state have been tracking the Frank v. Walker voter ID case too. They’ve been stressed over Gov. Scott Walker’s baldly pro-business actions to roll back climate change protections, and regulatory commissions that have handicapped the spread of rooftop solar and net metering.

“Voter ID is one more example of how we’re losing our democracy and, with it, democratic control over our energy future,” said Andy Olsen, senior policy advocate for the Wisconsin office of the Environmental Law and Policy Center in an interview. “Don’t forget the fossil fuel industry is one of the most powerful forces undermining American democracy today.”

As I’ve explored many times before, securing solid voting rights protections for people of color is an imperative for anyone hoping to mobilize any kind of effective, electoral counterpunch to the climate deniers in office. African Americans and Latinos continually tell pollsters that they want government action on climate change, polling higher than white people on these matters. But if a bunch of them can’t access their ballot because of these kinds of restrictions, then their voices aren’t represented in the lawmaking process. And climate change advocates lose those black and brown voices in the push for better policies on an issue that unfortunately rates as the least of Americans’ concerns.

“Erecting new barriers to the ballot doesn’t just empower the big polluters who are already exploiting the status quo,” said Courtney Hight, the Sierra Club’s democracy program director, by email, “it disenfranchises many in low-income communities and communities of color that are already disproportionately facing the worst effects of toxic pollution and deserve access to the vote to fight back.”

Voting rights experts have consistently found that voter ID laws don’t do diddly for fighting voter impersonation fraud, the exclusive raison d’etat for passing them, mainly because this fraud barely exists. But they do help advantage partisan gains in elections, primarily for Republicans. Meaning, they further weaken a democracy already made fragile by recent SCOTUS decisions that have gutted the Voting Rights Act and that now allow more financial influence over elections.

Case in point: the recent revelations reported by Yahoo that a 75-year-old Wisconsin billionaire named John Menard Jr. has already been benefitting from spending over a million dollars on Gov. Walker’s election, anti-recall, and reelection campaigns.

[I]n his five years in office, Walker’s appointees have sharply scaled back enforcement actions by the state Department of Natural Resources — a top Menard priority.

Charles Pierce at Esquire followed up with more on Menard’s dirty business practices:

In 1997, John Menard was caught using his own pickup truck to haul plastic bags filled with chromium and arsenic-laden wood ash to his own home for disposal along with his household trash. Menard pleaded no contest to felony and misdemeanor charges involving records violations, unlawful transportation and improper disposal of hazardous waste. Menard and his company were fined $1.7 million for 21 violations.

When rich cats like Menard are wielding influence over governors, you need your elections to be as free and fair as possible. Mandating photo voter ID gets in the way of that, as civil rights and environmentalists in Wisconsin are recognizing.

Had SCOTUS heard the case, its ruling would have determined whether voter ID laws are unconstitutional because they illegally abridge ballot access, mostly for people of color. When the high court last heard a voter ID case, in the 2008 Crawford v. Marion County for Indiana, the Justices ruled the practice constitutional — but only in that state, under that particular law’s statutes. Civil rights attorneys also failed to bring forth any individual witnesses harmed by the law.

Frank v. Walker would’ve been different, though. Civil rights groups did produce state residents who could demonstrate harm. Also, the Wisconsin law is much stricter than the law SCOTUS reviewed in 2008.

One federal judge who’s ruled on both Crawford and Walker has had a change of heart on the matter: Judge Richard Posner ruled in favor of keeping the voter ID law in the 2008 Indiana case, but has since adopted the opposite stance, saying that voter ID has been used as an instrument to suppress Democratic votes.

It’s not certain that the SCOTUS judges would’ve had the same awakening. But this won’t be the last SCOTUS hears of voter ID. A case is making its way from Texas, where a federal judge has found that the state intentionally conspired to discriminate against Latino and black voters.

Whether it’s a billionaire with a pollution fetish controlling state environmental regulations, or a law making it harder for hundreds of thousands to vote, the result is the same: disenfranchisement, which is a blow to all democratic causes.

“How can we control our energy and environmental future when we lose control over our democracy?” Olsen asked.