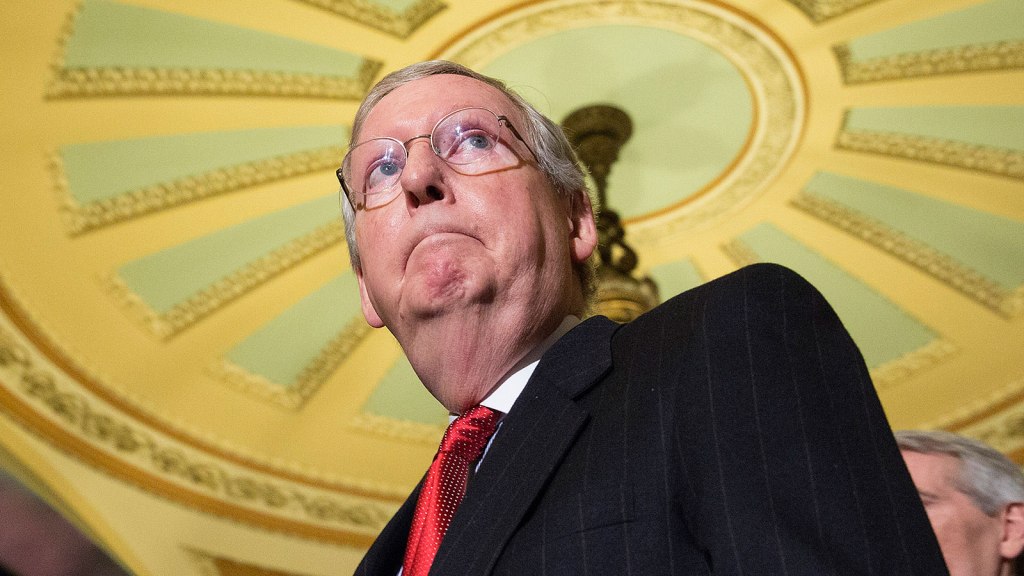 Over the past year, GOP leaders, driven by Senate Majority Leader Mitch McConnell (R-Ky.), have made a radical shift in the party’s public position on climate change. They are now actively seeking to destroy a global climate deal.

In any other universe this would be a major news story. But I guess the mainstream media has become so jaded to what the Koch brothers and Tea Party have done to the Republican party at a national level, that this radical shift seems just like another dog-bites-man-story, albeit one where the wound is fatal.

In fact, for most of the past quarter-century, most of the GOP leadership has at least given lip service to the idea that global warming is a global problem that needs a global solution. Not only have they abandoned that public position, but they now apparently believe the role of the “exceptional” and “indispensable” nation is to actively work to undermine the world’s best chance to save billions of people — including generations of Americans — from needless misery.

In its Monday piece, “GOP to attack climate pact at home and abroad,” Politico reports:

Let’s set aside Politico’s ridiculous framing, whereby the purpose of Obama’s efforts to achieve a global climate treaty is strictly personal and political — to “cement his environmental legacy” — rather than what it in fact is, moral and science-based, to avert centuries of misery for billions of people. For Politico, such framing is a feature, not a bug.

What’s radical is the nakedly immoral and self-destructive greed underlying McConnell’s strategy, which includes one of his aides “informing foreign embassies about GOP plans to oppose Obama’s strategy on global warming.”

Consider that the Pope’s recent climate encyclical expounded at great length on the immorality of global climate inaction. So the immorality of intentionally trying to thwart the first truly serious effort aimed at global action is far beyond immoral.

As recently as 2008, leading Republicans, including the party’s presidential nominee John McCain, campaigned on national climate action. But the election of President Obama with large Democratic majorities in both the House and Senate made the possibility of national climate action far more real. So fossil fuel companies, the Koch brothers, and the like seriously ramped up efforts to block action, with a special focus on the Senate after the House passed a major climate bill in June 2009.

One of the arguments opponents of U.S. action have always used is that there will never be a global deal where developing countries like China will agree to limit emissions. In this argument, since China et al are responsible for most of the recent growth in carbon pollution, their refusal to act renders U.S. action pointless — or even worse, it might put put us at an economic disadvantage by making our carbon-intensive products more expensive.

Indeed, this “we can’t do it without China” excuse became a mantra for party leaders, as this video shows:

Mr. Obama’s logic seems to be that the U.S. should first set a moral example by imposing costs that reduce our prosperity. This will then inspire China (8.7 billion tons), which produces and consumes nearly as much coal as the rest of the world combined, to do the same to its 300 million people who still live on pennies a day. Good luck persuading Xi Jinping.

Be careful what you wish for, deniers! As Jonathan Chait points out, “The exact sequence Obama tried to bring about has, in fact, happened. China has done the thing conservatives insisted it would never do.”

McConnell immediately complained he was “particularly distressed” by this deal because it supposedly “requires the Chinese to do nothing at all for 16 years.”

In fact, China had also pledged to double its carbon-free power capacity between 2015 to 2030, essentially building an entire new U.S. electrical grid, but one without CO2 emissions — which immediately gave the lie to the notion that the U.S. would some how suffer economically if we made the far smaller changes to our electrical grid needed to meet the EPA’s CPP targets.

As if to directly rebuke McConnell, two weeks later the the Chinese announced that they would peak in coal consumption by 2020! By the spring it was clear that the Chinese would beat their coal and CO2 targets by several years.

McConnell apparently decided his crusade to persuade GOP governors to simply defy the new EPA standards and thereby block U.S. climate action wasn’t enough. Team McConnell would have to actively try to persuade foreign leaders that the U.S. would not make good on its pledge. And so Politico reports that “a top policy aide to McConnell (R-Ky.) has had conversations with a select group of representatives from foreign embassies to make it clear that Republicans intend to fight Obama’s climate agenda at every turn.”

Yet, the deal poised to come out of Paris is exceedingly good from the United States’ point of view, as I’ve discussed. “The U.S. climate plans are at the least ambitious end of what would be a fair contribution,” as the independent analytical team at Climate Action Tracker put it — doubly so because we are the richest country in the world and the single biggest cumulative contributor of carbon pollution.

McConnell’s actions end the pretense that the GOP leadership has any interest whatsoever in trying to globally address the gravest preventable threat America faces. As Chait notes, “The speed at which Republicans have changed from insisting other countries would never reduce their greenhouse-gas emissions to warning other countries not to do so — without a peep of protest from within the party or the conservative movement — says everything you need to know about the party’s stance on climate change.”

I’m not sure a major political leader has ever pursued a strategy that is so directly counter to the health and well-being of all Americans, their children, and the next 50 generations. The Pope ends his encyclical calling on God to “[e]nlighten those who possess power and money that they may avoid the sin of indifference, that they may love the common good, advance the weak, and care for this world in which we live. The poor and the earth are crying out.”

One final note, especially for international readers: No matter what McConnell does, the truth is that the United States will meet the CO2 targets President Obama has made. Indeed, I am certain this nation will surpass them. Why? As morally and scientifically urgent as the EPA’s Clean Power Plan is now, that urgency is going to grow exponentially over the next few years, as global temperatures and extreme weather soar, and the dire nature of our situation becomes painfully obvious to more and more people.