As each hellish new natural disaster is matched by an equally hellish political stalemate on climate legislation, a growing segment of the American population is thinking: What can I personally do to get some climate action going here?

On Tuesday, the Yale Program on Climate Communication and the Center for Climate Change Communication at George Mason University shared a new analysis looking at where the American public stands on the issue of civil disobedience — namely, are people willing to show up to some form of nonviolent protest to demand action on global warming? This builds on earlier research from the same program, which found that the American public can be divided into six different “audiences” characterized by the following stances on climate change: Alarmed, concerned, cautious, disengaged, doubtful, and dismissive.

Ten* percent of the “alarmed” group — those who most strongly support climate policies” and are convinced global warming is happening, human-caused, and an urgent threat — responded that they “definitely would” participate in some form of environmental civil disobedience if someone they like and respect asked them to. Of everyone surveyed, even including respondents in the “cautious” and “disengaged” groups, about 5* percent expressed the same degree of commitment to the cause. 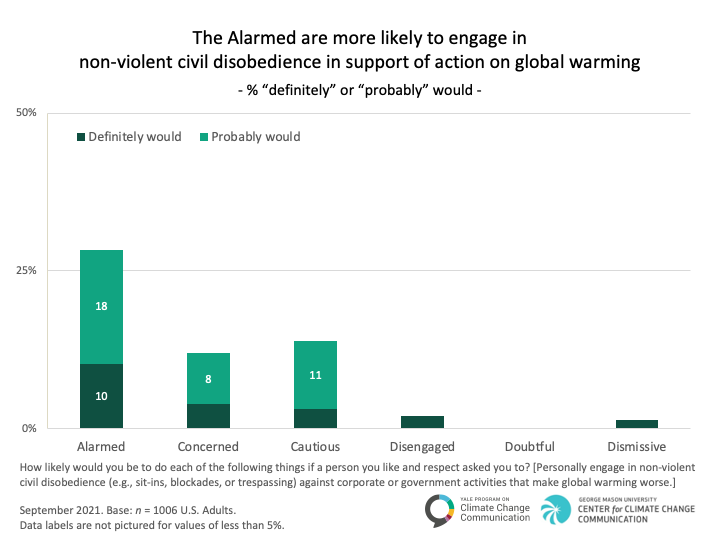 Those figures might not sound all that inspiring at first glance. However, they are significant in light of a concept called the “3.5 percent rule” for social change. The idea comes from Harvard political scientist Erica Chenoweth who, after studying hundreds of demonstrations across the 20th century, found that if at least 3.5 percent of a nation’s population actively participates in nonviolent protest, they are likely to achieve serious political change. Her theory is so influential, in fact, the controversial climate activist group Extinction Rebellion cites this figure in their mission statement.

So if we go by the Yale study’s participants’ self-reporting, it seems the American population may have reached the proposed threshold for major change. Maybe that’s one climate tipping point that isn’t terrible.

*This story has been updated to reflect new figures provided by the Center for Climate Change Communication at George Mason University.