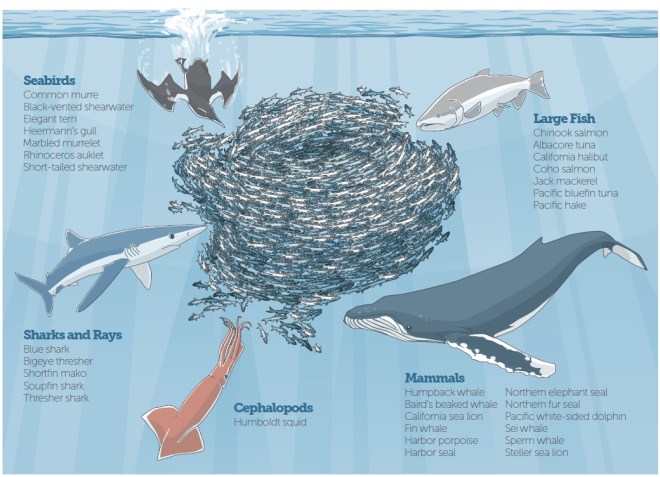 What do you see in that picture above? Squids. Whales. Sharks. Salmon. Some form of mysterious seabird with fashion-forward water wings (gonna guess a murre). Do you know what we don’t talk about? That delicious bait ball in the center that keeps all your precious charismatic megafauna ALIVE. I’m talking sardines: Nature’s real heroes.

I say this for reasons that go beyond how they taste on a bed of kale with piquillo peppers and cucumber and a shit-ton of squeezed lemon. Pacific sardines and their protein-rich, sexy-sounding bait balls are a foundation for both the Pacific food web and a vibrant West Coast fishery. But maybe not for long: Scientists’ project sardine stocks will fall from 2007’s height of 1.4 million metric tons to under 150,000 metric tons by July 1 of this year. That’s enough to potentially close the fishery and seriously imperil all those whales and sharks — which, by the way, don’t taste half as good when grilled to crisp perfection with a crème brûlée torch. Here’s more from Pew:

If the new assessment holds up to scientific review, fishery managers should follow through in April on their harvest guideline protocols and suspend fishing on sardines for the 2015 season. Doing so would give the population a chance to recover as ocean conditions improve.

The sardine fishery has historically been a major source of revenue for California’s commercial fishing fleet, dating back to the era chronicled in John Steinbeck’s masterpiece Cannery Row in 1945. Still, it would not be fair to blame the current collapse on fishing.

We’re not exactly sure why this saintly, smelly fish is in serious decline. Some scientists blame a naturally occurring climate cycle called the Pacific Decadal Oscillation, which flushes colder, nutrient-rich water along the West Coast (good for squid, bad for sardines). But this ongoing crash has fishermen and biologists alarmed. In the short term, some charismatic megafauna might be fine switching to abundant anchovies. But the sardine bust will eventually have negative impacts on their populations anyway — and on my salads, where anchovies are a piss-poor stand-in for the one true baitfish, at least as far as this charismatic megafauna is concerned.