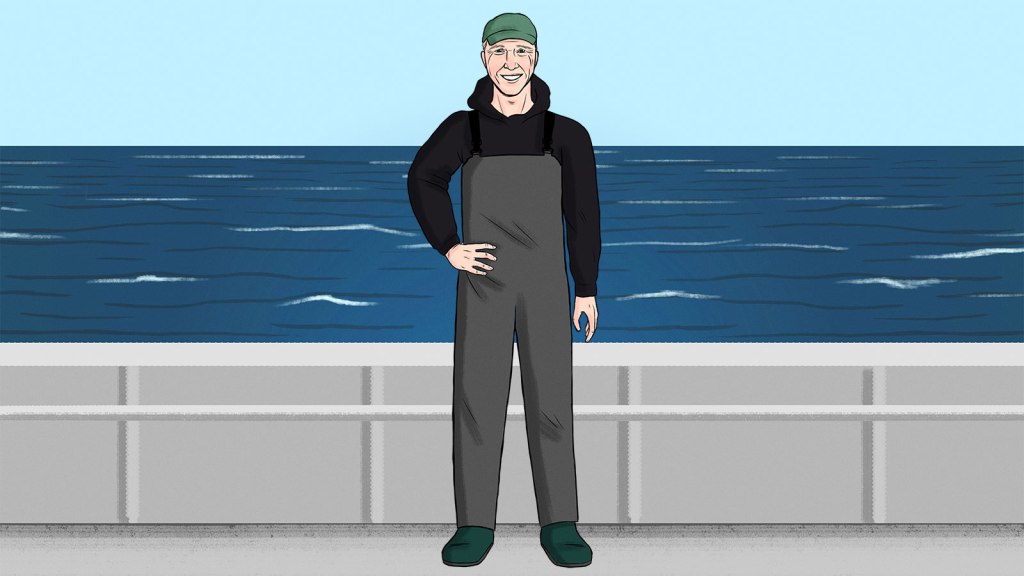 Paul Dobbins works on a farm that needs no inputs — no fertilizer, no pesticides, no water. Oh, and it doesn’t use any land either. This farm increases wildlife habitat simply by existing. It causes no erosion, cleans up pollution, and it captures more carbon than it releases.

That may sound more sci-fi than vertical-farm skyscrapers, or vat-grown meat, but it’s not. Farms like this are operating profitably around the world, producing tons of highly nutritious food. There’s just one catch: That food is kelp.

Dobbins runs the company Ocean Approved, which has five families growing kelp in farms in the Atlantic Ocean, off the coast of Maine. He thinks kelp could make Americans healthier, while sucking up carbon, building up fish populations, and reviving coastal communities crushed by the collapse of fisheries. But if kelp is going to accomplish all that it’s going to need our help. Seaweed has yet to seduce the American palate. It might just be the most rational food available right now, but humans are deeply irrational when choosing what to eat. 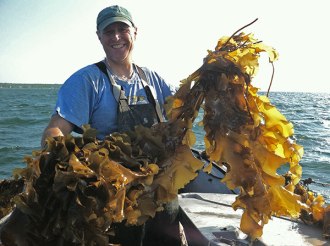 Dobbins isn’t worried about that — at least, he didn’t sound worried when we spoke. He’s a good salesman: not a high-octane pitchman, just a comfortably self-assured voice of reason, noting one piece of evidence after another to suggest that Americans could indeed fall in love with kelp. When I pushed back, he responded not with bluster, but with statistics.

“Think of it as kale,” he said. “And it is a staple in many places. Humans have eaten seaweed since the beginning: If there was a group of folks on a cold-water shore 2,000 years ago, they were eating kelp.”

Dobbins told me that Americans have already fallen for kelp — it’s just that we forgot all about it.

“My grandmothers were from Newfoundland and Prince Edward Island, and they remembered their mothers serving them kelp in the winter,” Dobbins said. “The reason was it was back before refrigeration and modern transportation systems. To get your green vegetable nutrition in winter you ate kelp. We lost the tradition in the U.S. with the advent of refrigeration and better transportation systems for our food.”

“I can see why,” Dobbins said with a chuckle. “I can picture my great-grandmother hiking up her dress and going out into the waves to get kelp in the middle of winter, and then suddenly the refrigerator arrives and I can imagine her saying, ‘Enough with that, we’re eating frozen peas.’”

The thing is, if you are looking for a frozen convenience food, kelp is ideal because it evolved to freeze, Dobbins said: “Tide goes out the kelp freezes, tide comes back in it unfreezes. So we are able to make a frozen food product that is indistinguishable from something harvested that day.”

See what I mean? He’s a good salesman. And he just keeps piling up the evidence.

Kelp is healthy, Dobbins continued: It is packed with iodine, and it just so happens that the American Association of Pediatrics recently recommended that pregnant women and breastfeeding moms get more of that particular element. (We’re eating less iodized table salt, and the salt in processed food is often non-iodized.)

“When you eat kelp you are getting all those trace elements and minerals that have washed out of the soil and ended up in the ocean,” Dobbins said. “I really do believe it makes me healthier. I’m 109 years old and I don’t look a day over 52.”

Dobbins got into the kelp business after spending his whole life watching the ocean get beat up:

“What I’ve seen in my lifetime is almost indescribably stunning,” he said. “It used to be when I was a kid my dad could take me out to a place called Halfway Rock and we could jig up a cod for supper that was as tall as I was. And my 19-year-old son has never seen a live cod. One of our favorite recipes used to be Maine shrimp, eggs, and kelp for breakfast, and the last few years there hasn’t been a Maine shrimp harvest. When I was a scallop diver, the sea floor was covered with urchins. Then I got out of the water for 25 years, and when I got back in I burned through three air tanks before I saw one urchin. I’d heard the stories — but I just didn’t believe that we could hand-pick all those millions of urchins. And we did.”

One species after another disappeared from the waters. And every time the ocean suffered a blow, the working-class coastal communities that depended on its waters took it in the gut. Dobbins comes from that community. His father worked on the water when he was young, and his uncles on his mother’s side worked as watermen, up and down the coast.

After working on the water in his youth, Dobbins went off to school, and had a career in biotechnology. But then he came back. He decided he should be building a business that contributed to the coastal communities and helped restore the ocean. That’s where the name Ocean Approved comes from: “We will only do practices — based on our experiences and science — that the ocean would approve of.

After talking with Dobbins, kelp farming sounded good … maybe too good to be true. So I started searching for kelp farming skeptics, or at least academics without a direct financial reason to hype seaweed agriculture. I started calling ocean ecologists and marine biologists in search of an unbiased kelp expert. Jan Newton, an oceanographer at the University of Washington, is studying the ability for seaweed to reduce ocean acidification, and she told me it’s clear that kelp suck up a lot of carbon. The real question is: Can you deliver it to a market without the carbon produced by outboard motors, and freezers, outweighing the carbon the kelp absorbs? That hasn’t been studied in detail.

Newton told me that if anyone would know about the limitations of kelp farming, it would be Tom Mumford. Mumford is a kelp expert, retired from a first career with the Washington State Department of Natural Resources. He had helped the state assess a proposal to build a 400-square-mile seaweed farm for biofuel production, back in the early 1980s when gas prices were sky high. Mumford had studied the seaweed farm plan, and the state had ultimately decided not to build it, so maybe he’d discovered that kelp wasn’t as awesome as it seemed.

When I got Mumford on the phone, however, he seemed even more excited about kelp farming than Dobbins was. “This stuff fixes carbon almost like nothing else,” he said.

“Kelp drives an enormous amount of the food web,” Mumford said. So much so that when scientists looked at the origin of the carbon of various sea creatures, they found that much of it started as seaweed. Cormorants in the Aleutian Islands are essentially 50 percent kelp, Mumford said. “That carbon may well be locked away for a really long time as it moves through the food web.”

Even if you just consider the 50 percent of the carbon captured by kelp that you can harvest, kelp still looks really good, Mumford said. One analysis suggested that seaweed farms can provide 25-50 units of protein energy in exchange for one unit of fossil fuel — and that’s just the protein.

Ultimately, Mumford said, Washington State decided not to build its kelp biofuel farm because it was expensive, and in the mid-’80s oil got cheap again. It worked, environmentally, just not economically. Mumford had nothing but praise for the kelp farms that are making money.

Ocean Approved is making the kelp business work by selling a little bit at a time. Flatbread Pizza, a small chain of restaurants in New England, will sell over 10,000 pounds of the company’s kelp this year by sprinkling a little bit of it atop garden salads. Americans could support a lot of kelp farmers if we all ate just a little bit.

Whenever we grow food on land, we face tough trade offs. As the world population grows to its expected peak of 10 or 11 billion, humans are going have to figure out how to feed a lot more people, ideally on less land. So why not farm a little bit of the 70 percent of the Earth covered in water?

Ocean Approved harvests 33,000 pounds of kelp per acre, which is similar to the yield from an acre of potatoes. And it does this without inputs, while improving the environment, and creating habitat for wildlife. Farming mussels, or oysters, provide similar benefits, Dobbins said.

We’ve never figured out the problem of agriculture, as Land Institute founder, Wes Jackson, puts it. That is, we’ve never found a way to farm in a way that’s truly sustainable. But that assertion may only apply to land-based ag. So far, kelp farming sure looks pretty darn sustainable. Want a recommendation for eating your way to a healthier planet? Learn to love the produce of our sea farms.