Why Endure A Relentless Yoke?

Ah, wouldn’t it be nice to find a climate solution that actually sounds like a life improvement? And there IS more than just a purely “summer brain” argument in favor of your “work less, cut carbon more” way of thinking. After all, shorter work weeks would mean less energy spent powering all those office buildings, fewer commute hours, and fewer Uber-ed delivery lunches.

But before you get too excited about a life of leisure, know that the eco-argument for a shorter work week isn’t really about keeping the lights off for longer. It’s about taming that enormous consumption-driver, capitalism. And that gets a little complicated.

It’s a no-brainer at this point that economic growth isn’t always compatible with ecosystem health, particularly when you’re talking about countries like the U.S. with ridic carbon footprints. That way of thinking has helped give rise to something called the degrowth movement (if you’re not familiar with it, you’ve never met my delightful and follically blessed ex-colleague Sam Bliss).

Degrowthers argue that economic growth and a world that evades ecological collapse are fundamentally incompatible, because economic growth has historically gone hand in hand with higher carbon emissions. Theoretically, if everyone collectively agreed to consume less, production would drop to meet the new, lower demand and we’d arrive at a less bloated, more sustainable economy.

Granted, the usual argument for prioritizing the wellbeing of future generations over economic growth today is decidedly less appealing than the idea of Fridays off forever. “This feels to me like a rebranding of, ‘Hey, reduce your consumption’ into ‘Hey, you’ll have to work less,’” said Joseph Majkut, Director of Climate Policy for the centrist think tank the Niskanen Institute, on the “work less, emit less” proposal.

Pretty much every industry operates on the burning of fossil fuels, so as those industries grow, so will their carbon footprints. But Majkut, a big proponent of carbon pricing, maintains that economic growth doesn’t always have to compete with emissions levels. It’s theoretically possible to have a high-performing, decarbonized economy, if high-emitting or even moderately-emitting industries were penalized accordingly.

But, at least so far, that “let’s balance out the environmental impact of economic growth with greener regulations” approach hasn’t actually panned out. Between 1990 and 2014, for example, the U.S. economy reduced how much CO2 it spewed out for every dollar it created of Gross Domestic Product (the total value of what a country produces in dollars) by 40 percent; but in that time, U.S. GDP grew by 293 percent, negating any net climate benefit.

Price Waterhouse Cooper estimates that, to avoid truly devastating global climate change and maintain GDP growth, the global economy would have to decarbonize at a rate of about 6.4 percent per year. It’s currently around 3 percent for G20 economies.

You don’t have to have been an econ major to know that shrinking the GDP is not going to be a popular suggestion among politicians, or anyone with a retirement fund. GDP has generally been used as a way to measure how well a country is doing relative to the rest of the world, and by proxy, how well its inhabitants are doing. The basic logic is that if a country has a huge amount of money from selling all the things it produces, its inhabitants will all be well-off, too. They’ll be able to buy things, to support themselves, to have what they want and be comfortable. Of course, not to be too woo-woo, this is all about material well-being, not spiritual or emotional or anything like that.

But in 2019, GDP is a pretty inadequate metric of national well-being — at least, in terms of how well the individuals who live in that nation are doing. If the national GDP were divided up among every household in the United States, every household would get $151,971 per year. This is so far from reality it’s almost laughable; 86 percent of households make less than that and 42 percent make less than one-third of that. So the argument that we need full, turbo-charged employment for the sole sake of maintaining or growing the GDP isn’t super-convincing. Certainly not when real income has stagnated since the 1960s; certainly not when full-time, well-paying employment with benefits is increasingly relegated to a privileged class; certainly not when 1 percent of the population owns 40 percent of the wealth. 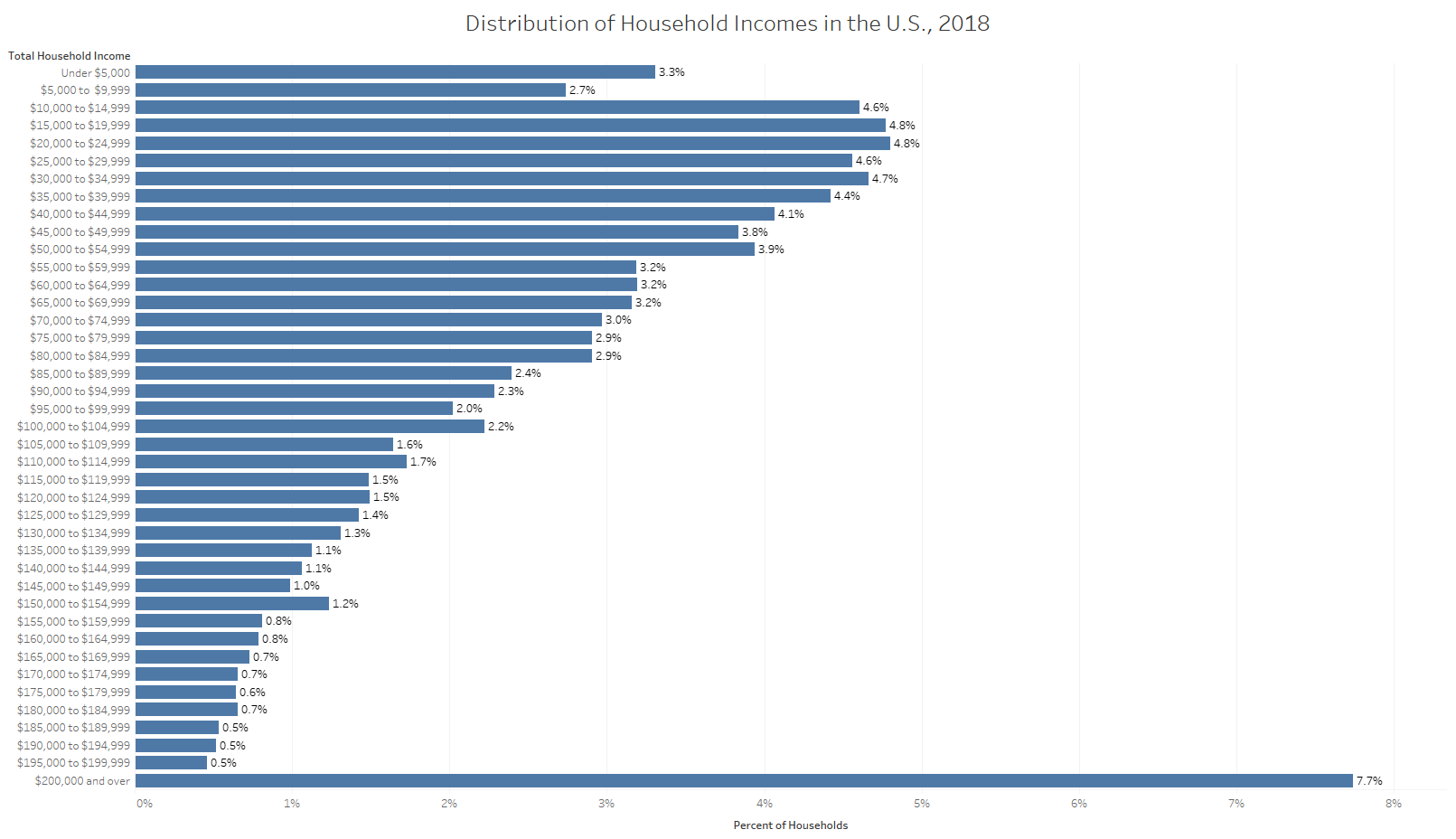 If you look at the enormous wealth and work-obsessed culture of the United States as a whole, it’s easy to wonder: Would it be THAT big a deal to offset pollution by altering our big-money, high-consumption American lifestyles by just … hanging out? Sleeping in? More happy hours, fewer long nights at the office?

Obviously, working less means having less money and less stuff. But at the same time, it seems luxurious — at least for the already well-off, who have money and stuff to spare. But just looking at the distribution of income in the United States, it’s immediately obvious that there are many millions more who think: “I barely have what I need to survive; I can’t afford to work any less.”

So can a shorter work week alone reasonably save us from ourselves? Well, last week, the British think tank Autonomy calculated the number of hours various industrialized European countries would need to make their work weeks in order to meet emissions targets outlined in the Paris Agreement. And, um, the results look less like a three-day-weekend and more like, well, near-unemployment. A 6-hour work week in Germany, 12-hour in Sweden, and 9-hour in the U.K.

That calculation may drop some jaws, but it’s not totally surprising in theory. Those of us in rich countries (unequal though they may be!) simply make and buy too much stuff to make the path to sustainability an easy one. The average American carbon footprint is 15.5 metric tons per person per year. (Although a fair amount of that footprint is out of an individual’s control — more on that in another column.) A reasonable per-person carbon footprint to keep CO2 levels below a disastrous level has been estimated to be about 1.6 metric tons per year.

But if tomorrow every employee in the United States said, “We’re all working less now! Bye!” and every employer said, “Cool, we’re enlightened, we don’t want to make as much money anymore!” with policies exactly as they are, it would be a disaster. Because as we’ve discussed, even though our country is wildly wealthy, most of the people in it struggle to get by while working full time. Poverty would surge without any social safety net. The cost of living might adjust to meet it, but it wouldn’t be immediate. There would be substantial suffering. Not only that, but if the U.S. were to shrink production, there’s a good chance a less-developed economy with an even more fossil fuel-dependent means of production might say, “Hey, great, we’re going to pick up your slack.” And the global emissions problem wouldn’t be resolved anyway.

So if we can’t, as a nation or a world, staycation our way to sustainability, what options do we have to curb planet-harming economic growth without sacrificing the welfare of people who are still struggling to get by? Majkut, with the Niskanen Center, suggests a dividend (like a universal subsidy) that would be distributed to households to accompany a carbon fee. But on the bigger picture, secure social welfare programs — like public healthcare and childcare and parental leave, or even something like a Universal Basic Income — would alleviate some of that terror, and theoretically provide the freedom for people to pursue jobs or education that work to develop a decarbonized economy. Strong workers’ rights that make wages more equitable, through unions or other means, could contribute to that, too.

So, yes — working less and buying less could theoretically make an impact on industrialized nations’ carbon footprints, but in isolation, they definitely wouldn’t be nearly enough to solve our climate crisis in an equitable way. It’s going to take a whole litany of economic and social reforms to do that.

So if you do want to take some time off this fall, consider using it to look into candidates who will push for greener policies. It’s a beautiful time of year! Have you ever been to the Grand Canyon of Pennsylvania?