Our need for metals runs deep. How deep, you might ask? Why, up to 16,000 feet deep, in the form of potato-sized lumps of metal lying on the seafloor in some of the deepest parts of the oceans. We’ve been making sci-fi movies and writing books about it for decades, but commercial deep-sea mining might soon become a reality. Here’s everything you need to know about this up-and-coming industry.

It starts with our need for clean energy. We’re in the midst of an energy revolution: Cities and countries around the globe are switching to clean energy to curb their carbon emissions. It’s become a common government and company promise to say ‘net-zero carbon emissions by insert-year-here.’ With so many proposed transitions to renewables, the real lynchpin is keeping up with the demands for infrastructure. And this means metals.

Battery storage, solar and wind power generation, and continued tech advancement require metals like neodymium, dysprosium, tellurium, cadmium, lithium, and cobalt, to name a few. A single Tesla Model S battery alone contains over 60 kilograms of lithium. And sure, maybe we can’t all afford a Tesla, but if you want a zero carbon-emitting solar power and electricity at night, batteries — and lithium — are still key.

The unique properties of metals are at the foundation of renewable technologies, like magneticity and conductivity, and allow them to turn wind and sunlight into usable, storable, energy. Many of these metals can be quite rare, and their demand is expected to soar over the next decades.

So where can we get all these metals? That’s where deep-sea mining could come in. Sounds pretty straightforward, right? That is, if we understood more about this mysterious terrain. We know more about the surface of the moon than we do about the depths of our oceans, but one thing we do know is that the oceans hold a lot of metals. We’re talking tellurium in concentrations 50,000 times higher than terrestrial deposits. Millions of tons of copper, zinc, gold, and silver. And only thousands of feet of water and a diverse and mostly unknown habitat in our way.

The skinny on deep-sea mining

Real interest in the resource extraction of the deep sea began in 1967, when geologist John Mero published a book that suggested these metals could be used to meet global demand for technology and electrification. Following this growing interest, the U.N. responded in 1982 with the United Nations Convention on the Law of the Sea, a treaty that sought to regulate the high seas by declaring them the “common heritage of mankind.” It also created three institutions to govern the exploitation of the ocean, including the International Seabed Authority, or ISA. It’s clear that the U.N. intended the resources of the seas to be used, but also regulated.

In the nearly 40 years since the treaty’s drafting, the treasure trove of the deep remains unmined. Yet the technology for mining is on the way. In September 2017, Japan became the first country to run a large-scale, deep-sea mining test, proving that it was indeed possible. Including one for Japan, the ISA has handed out 29 contracts for exploration to countries and companies, allowing them to develop equipment, run tests, and peruse the seabed for possible mining sites.

The organization has been working toward creating international regulations governing deep-sea extraction. The ISA drafts a new set of rules every six months and invites consultation from member states, private companies, and organizations. The next session is in July with the final regulations due to be completed by 2020.

No such thing as a free lunch, or free metals, apparently 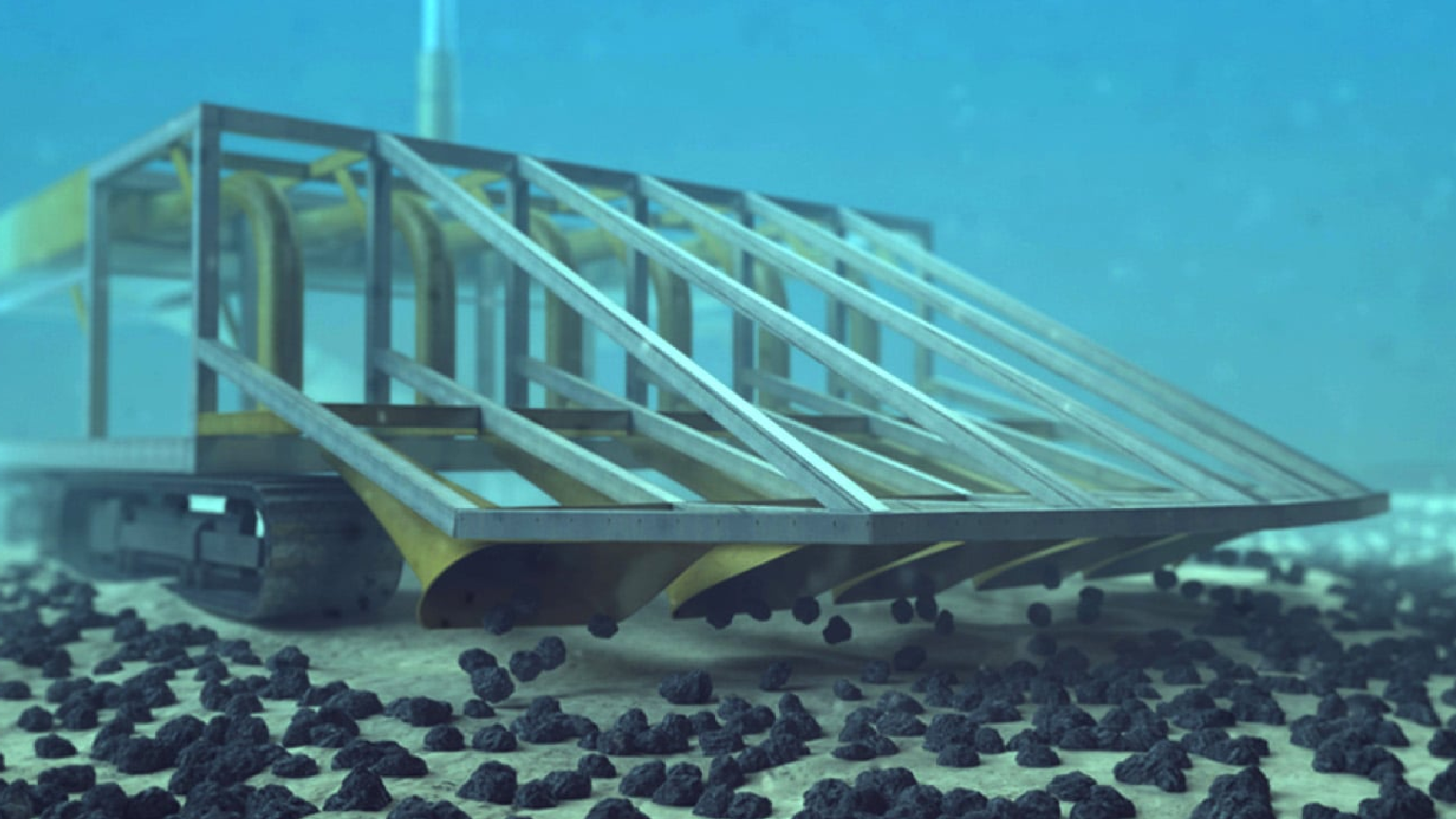 A rendering of the machinery that might be used to harvest polymetallic nodules. Photo courtesy of DeepGreen Metals.

The idea of deep-sea mining has long had a bad rap in the eyes of environmentalists — the ecosystem is only just beginning to be understood, and most scientists see some biodiversity loss as an unavoidable side effect. The more intensive types of deep-sea mining involve actually removing parts of the seabed or seamounts, which would kill any life living there and would take decades (at the very least) for the habitat to fully recover.

The most common type of deep-sea mining, polymetallic nodule collection, is less intensive and more simple. The metal-containing nodules rest scattered across the large stretches of underwater plains. Prototypes involve harvesters on belted tracks rolling across the seabed, suctioning up the nodules and sending them via flexible pipe up to a surface boat. Anything else that’s collected, like water and sediment, is returned back to the seafloor.

Even though polymetallic nodule collection tends to be less harmful than the other forms of mining, there are still many issues associated with the process. Scientists like Daniel Jones see serious consequences for the sensitive habitat.

“Imagine a tractor or farm vehicle going over a field,” said Jones, a deep-sea biologist at the National Oceanography Center in South Hampton, in the U.K. “It disturbs everything, especially the sediments, which take a very long time to settle. In addition, they’re taking off the top few centimeters of sediment and the nodules, and that’s where the majority of the life lives in that environment.”

Besides these “plumes” of displaced sediment and removal of nodules, other risks to sea life include heat, noise, and light emitted from mining vehicles.

The not-so-great alternative to deep-sea mining

Right now, terrestrial mines are the status quo source for renewable technology metals. If you put solar panels on your roof, buy an electric car, or support your city or state’s offshore wind turbine initiatives, you’re supporting terrestrial mining. What does that really mean?

If we revisit this wistful Tesla example, a lithium-ion battery contains lithium, nickel, and cobalt, two of which (lithium and cobalt) Tesla already says are in short supply. Most lithium comes from the “Lithium Triangle” — Argentina, Chile, and Bolivia — where the sought-after resource uses huge amounts of fresh water in an already arid region and pollutes the rest with toxic chemicals. Nickel mining often saturates nearby towns with heavy metals and thick, industrial pollution — rivers in Russia run red and NASA says you could mine the soil. Cobalt is no better; the Democratic Republic of the Congo is the main supplier of the world’s cobalt, where an unknown number of children work in hazardous mine conditions for meager pay.

Basically, your hands might be dirty, even if your technology is “clean.” And, to put a cherry on top of this harrowing sundae, there’s evidence to support the fact that many terrestrial ore grades, or the quality of extracted metals, are falling.

Recycling these metals isn’t viable yet — there isn’t much infrastructure in place yet. Plus, even if we built up the systems, it is expected that the new demand will exceed the existing supply within 20 years.

We simply need more metals. As demand for these metals continues to climb, and the viability of traditional mining falls, some look to deep-sea mining as an unavoidable outcome. 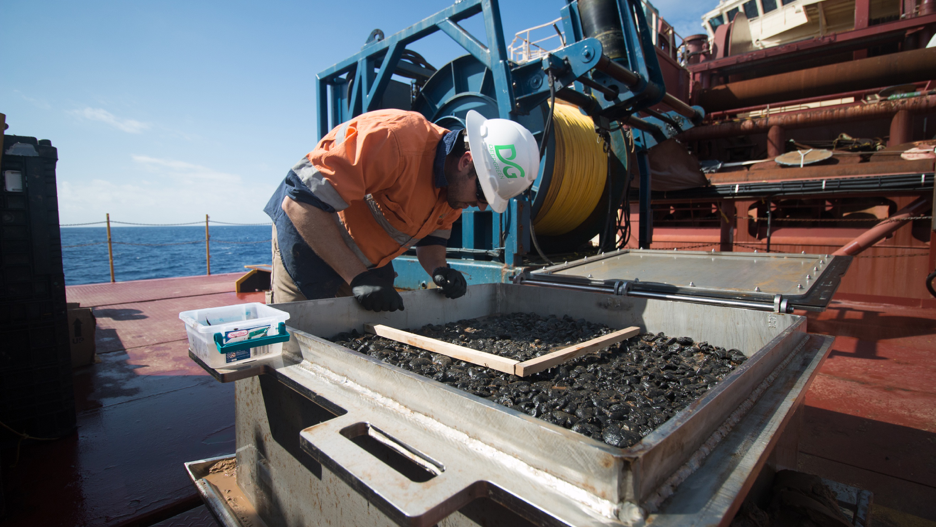 A small amount of polymetallic nodules experimentally collected from the seafloor. Photo courtesy of DeepGreen Metals.

So, is it inevitable that we inflict some damage on the deep-sea in order to create green infrastructure?

“Some people would speak of a devil’s bargain,” said Conn Nugent, the project director of the Pew Charitable Trust’s Seabed Mining Project and an observer of ISA meetings.

This is why it has taken so long for the ISA to translate the cryptic meaning of the Law of the Sea treaty into mining regulations. In order to create a set of regulations and protections to preserve the deep sea while also providing enough leeway for mining industries to meet global metal demand, the ISA must take feedback from interested mining parties, as well as conservation-focused scientists.

In terms of protection, the ISA has already designated large swathes of no-mining zones and has drafted regulations on the mining process to keep them minimally invasive. The organization has been collecting information about deep sea flora and fauna since its creation, and requires contractors to “assess potential effects of their activities.”

If the ISA is careful to create conservative mining regulations, some scientists see potential for the industry to also create opportunities for further exploration and understanding of the deep sea.

Andrew Thaler, a deep-sea biologist and frequent observer at ISA sessions, says that mining expeditions will be in the best position to study remote deep-sea life. They will have more access and equipment to study the deep than ever before.

Plus, Thaler argues that all of the concerned parties have environmentalism in mind to some degree. “I talk to a lot of people at these different mining companies,” Thaler said. “I haven’t met anyone involved in this process that doesn’t genuinely care to some extent about the ecosystems they are working on. Unlike any other extractive industry in pretty much human history, this is really the first industry where science and environmentalism have had a 50-year head start.”

If deep-sea mining is done with care, it could be a boon to our renewables industry and even our understanding of the fragile ecosystem of the deep sea. Maybe even something as intrinsically destructive as mining might have a silver lining. Pun intended.