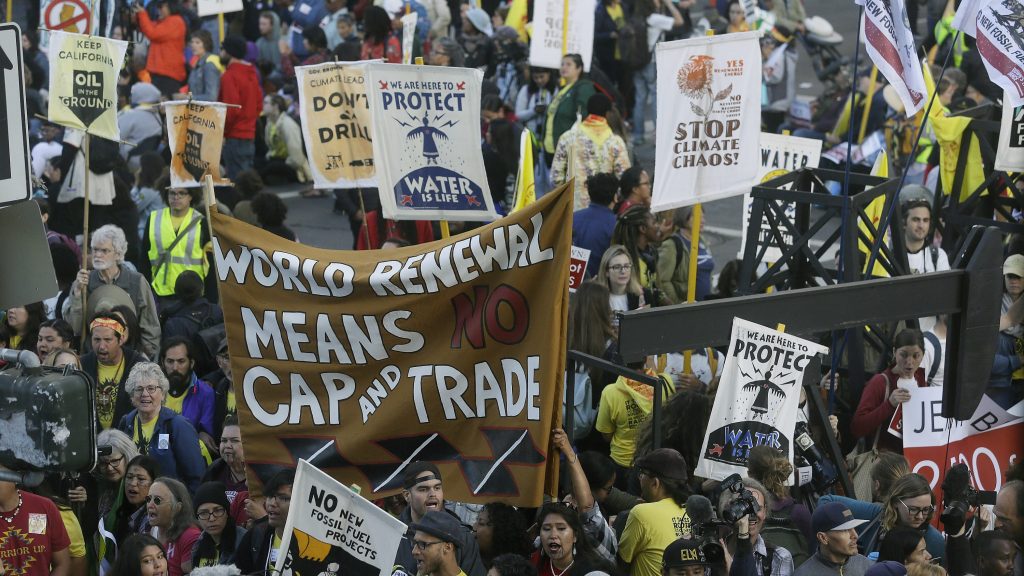 An international collection of delegates in suits filed into San Francisco’s Moscone Center Thursday morning to take action on climate change. They had assembled, in part, in defiance of the Trump administration’s dismissal of the global threat.

Outside the convention center, demonstrators in vibrant colors representing dozens of grassroots groups were arrayed, raising their voices to those headed indoors. They had gathered in defiance of initiatives that, yes, combat climate change, but don’t address the environmental inequities imposed on indigenous peoples, low-income communities, and communities of color.

For a moment inside this week’s Global Climate Action Summit, the two worlds collided. An opening plenary began with Kanyon Sayers-Roods, a representative of the Indian Canyon Muraun Band of Costanoan Ohlone People, offering a message and a song. The well-heeled crowd cheered her as she welcomed attendants to the Ohlone’s traditional territory.

But her salutation came with a bold critique aimed at one of the solutions touted by the summit’s host, California Governor Jerry Brown: “Don’t support carbon trading.”

Schemes like California’s cap-and-trade program illustrate what those outside the summit want discussed within the Moscone Center. While carbon emissions have fallen statewide, communities located near heavy industry are experiencing an alarming uptick in airborne pollution.

Everyone on either side of the summit walls is in agreement that climate change needs to be stopped — and that it can be done in spite of Trump. But Sayers-Roods’ plea is part of an undercurrent at the gathering that’s pushing for action that goes one step further, ensuring that improving the health of our planet doesn’t come at the expense of vulnerable groups that are often left out of decision making. The protesters outside are calling for initiatives that are devised by, led by, and bring benefit to those excluded groups.

Activists interrupted Michael Bloomberg’s address inside the summit, chanting, “Our air is not for sale, our communities are not for sale.” Chuckling, Bloomberg responded, “Only in America, can you have environmentalists protesting an environmental conference.”

Ahead of the summit, more than 30,000 demonstrated in a people’s climate march in San Francisco over the weekend. Many have stayed on throughout the week, building a counter-culture of activists, artists, nonprofits, and labor. Here are a few of their biggest demands:

The summit is Brown’s attempt to bring state, city, corporate, and community actors together to take action on the climate. His state’s cap-and-trade system has been a feather in his climate cap — it’s placed a limit on how much carbon can be emitted statewide.

But it also allows companies to buy or trade allowances to pollute. As noted, the carbon “trade” has led to emissions being concentrated in hotspots — usually situated in low-income neighborhoods of color.

So when leaders at the summit promote the carbon market, says Greg Karras, a senior scientist with California-based nonprofit Communities for a Better Environment, “They’re selling the thing that’s not working — that’s disempowering our communities.”

Jesus Vasquez, an activist and attorney with Organización Boricuá de Agricultura Ecológica, traveled to San Francisco from Puerto Rico to support the grassroots groups that make up the Climate Justice Alliance. Those organizations were there for him in the wake of Hurricane Maria, he says, so he’s here to support their advocacy efforts.

It’s community-led groups and not companies, he believes, that will lead the way forward to a fossil-free future. So while the Global Climate Action Summit has its arms wide open to business and finance entities, Vasquez and others don’t want profit to be the motive behind efforts to rebuild his island. Otherwise, he explains, he’s worried that gentrification and the privatization of public land and services will follow.

“We cannot permit that the solutions for climate change be driven by corporations,” says Vasquez. “Go to Puerto Rico and talk with the communities that are living this first hand. Listen and let those organizations and communities lead.”

A transition to a green economy will fundamentally change the job market. But labor leaders and advocates want to make sure that fossil fuel workers aren’t left behind. That’s why demonstrations have been billed as: “Rise for Climate, Jobs, and Justice.”

“We need to makes sure that every new job in the clean energy economy pays a family-sustaining wage, has benefits, includes the right to unionize,” says Paul Getsos, national director of the Peoples Climate Movement.

Thanks to AFL-CIO President Richard Trumka, who started his career as a coal miner, that message echoed inside the summit Thursday morning. “I ask each one of you: Does your plan for fighting climate change ask more from a sick, retired coal miner than it does from you and your family?” he said. “If it does, then you need to think again.”