The summer brought us an apocalyptic stream of bizarre weather events that scientists said were worsened by climate change. Wildfires chased people into the sea in Greece, drove tens of thousands from their homes in California, and raged across Sweden as far north as the Arctic Circle. Heatwaves swept coast to coast in the U.S., broke records all around the world, and killed dozens in spots as far-flung as Japan and Quebec. Hurricanes got turbocharged.

The weird weather even seemed to be freaking out some climate scientists. “What we’re seeing today is making me, frankly, calibrate not only what my children will be living but what I will be living, what I am currently living,” Kim Cobb, a professor of earth and atmospheric science at the Georgia Institute of Technology, told the New York Times in early August. “We haven’t caught up to it. I haven’t caught up to it, personally.”

While that Times piece reported on climate change as a driver of extreme weather, most U.S. mainstream media coverage of weather disasters over the summer left climate change out of the story. Media Matters found that TV news coverage of a heatwave in July, Hurricane Florence in September, and wildfires throughout the summer rarely mentioned climate change.

You can see that omission in the following chart showing media coverage of climate change over the course of 2018; there was no notable increase during the summer months, despite the rash of weather and wildfire disasters. The chart, using data from the MIT/Harvard Media Cloud project, shows the number of articles that included the phrases “climate change” or “global warming” in 32 top online news sources in the U.S, ranging from the New York Times to Fox News to HuffPost, from January 1 of this year to December 16. 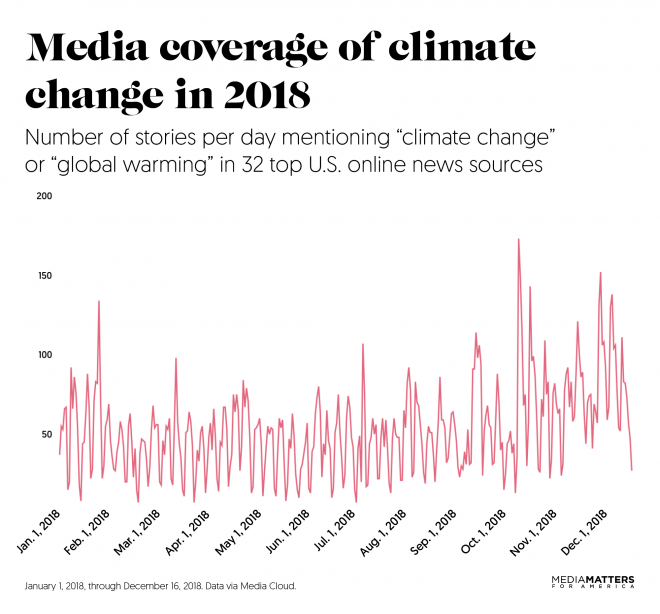 The peak of climate coverage in 2018, according to the data above, came on October 8, the day after the U.N. Intergovernmental Panel on Climate Change released a dramatic report on what the world is in for if we let the average global temperature rise more than 1.5 degrees Celsius above pre-industrial levels. But even though that marked the year’s peak, it doesn’t mean there was enough high-profile coverage of the report. The majority of the top 50 U.S. newspapers didn’t mention the report on their homepages on the morning of October 8, Media Matters found.

The IPCC report warned us that we have only about a dozen years left to get our act together and prevent the worst consequences of climate change. If major news outlets had taken their own reporting on the IPCC’s findings to heart, they would then have dramatically ramped up coverage of climate change from all angles — the dangers it poses; the people who are hurt the most; the policies that could fight it; the strategies for adapting to changes already underway; the ways that it affects energy systems, health, national security, and migration patterns; and so much more. Climate reporting would have shot up like a hockey-stick graph, with headlines at the top of homepages and front pages and newscasts every day. But it didn’t. It gently settled back down toward the status quo.

(Of course, there are media outlets doing consistent and excellent coverage of climate change — including InsideClimate News, Mother Jones, and, yes, Grist — but many of them don’t get a ton of traffic and so weren’t captured in the chart above.)

The second-biggest spike in coverage in 2018 came in the wake of another sobering scientific report, the National Climate Assessment, produced by more than 300 scientists from 13 federal agencies. The Trump administration tried to bury it by releasing it on Black Friday, but it got coverage anyway in the following days, including coverage of the amount of coverage. Not all of the attention was commendable; some reports incorporated nonsense from climate deniers. Still — even with all of the articles on the assessment, good and bad, plus those on other studies and reports that came out over the next week — coverage of climate change didn’t surpass the October 8 peak. The warnings about climate change piled up high, but the media coverage stayed fairly level.

To get a full picture of 2018 climate coverage, you actually need to look further back. Check out this graph showing climate change coverage over the last three years, from January 1, 2016, to December 16, 2018. 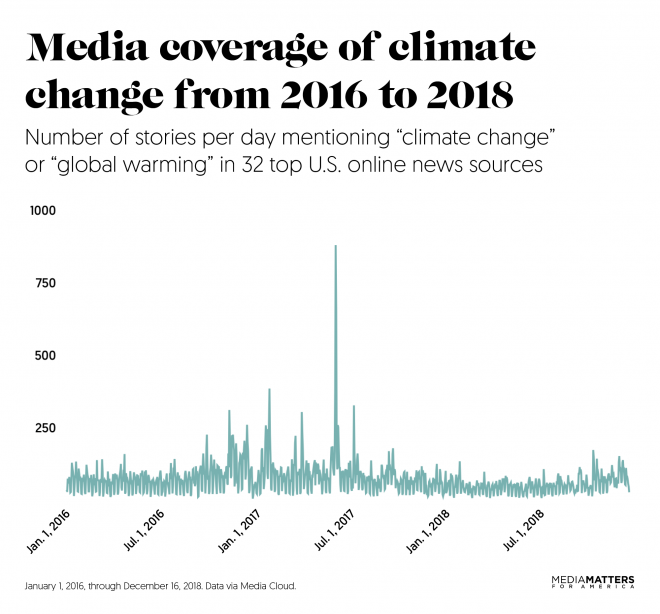 See that huge spike in the middle? That’s from June 1, 2017, when President Donald Trump announced that he intended to pull the U.S. out of the Paris climate agreement. No other day in the last three years saw anywhere near that much coverage. When Trump stages an event related to climate change, the media snap to attention. The rest of the time it’s like, “Climate what?”

That aligns with what Media Matters found when we looked at climate coverage on broadcast TV news programs in 2017: Trump dominated the news segments about climate change. Researchers at the University of Colorado Boulder, in the International Collective on Environment, Culture & Politics, reached a similar conclusion when they analyzed TV news coverage from November of this year: “In U.S. television coverage of climate change or global warming in November 2018, ‘Trump’ was explicitly invoked over 14 times more frequently than the words ‘science’ or ‘scientists’ together and nearly four times more frequently than the word ‘climate’ itself.”