This story was originally published by Oceans Deeply. For important news about plastic pollution, you can sign up to the Oceans Deeply email list.

When oil prices drop, as they have in recent years, recycling profits plummet. In most countries, it’s cheaper to simply make new petroleum-based plastic goods than turn the ones used once into the same items again. That’s led to a dismal recycling rate of just 9 percent worldwide, and an enormous buildup of plastic in the ocean, according to a recent study on global plastic production.

But as recycling rates drop and ocean pollution worsens, many innovators are taking marine debris, a notoriously unrecyclable material, and turning it into useful items. They’re turning all types of marine plastic trash, from old fishing gear to bits of broken-down hard plastic called microplastic, into new products.

“I think it is viable if it means that marine debris increases in value, so the efforts to clean up get a higher priority,” said Kristian Syberg, a plastics expert at Roskilde University in Denmark who has sailed through the Great Pacific Garbage Patch, collecting samples of marine debris for analysis. “Such cleaning processes near coastal zones in highly polluted areas could potentially remove a lot of marine debris such as microplastics.”

Products currently made from recycled ocean plastic include shampoo bottles, skateboards, sunglasses, athletic shoes, sportswear, doormats, jewelry, and board shorts. Some companies involved in ocean plastic “upcycling” are reporting encouraging numbers in keeping marine debris out of landfills and the ocean.

Four years ago, Cape Porpoise Trading Company in Maine began making doormats out of old lobster trap ropes collected before they are lost or abandoned at sea.

“Since the company’s inception, we’ve sold somewhere around 6,500 mats, and each mat uses about six pounds of rope, on average,” said Kerin Burnett, the company’s owner. “Through our work, we’ve kept nearly 40,000 pounds of rope out of landfills and the ocean.”

Burnett said she reaches out to fishers on social media and asks for their unusable ropes. Though she pays them per pound, Burnett said that many fishers are happy to contribute their rope for free. Once the company picks up ropes, the staff cleans and sorts them according to color, and then weaves the ropes into doormats.

Bureo recycles fishing nets in Chile that otherwise would be abandoned in the ocean into skateboards and sunglasses.

And a partnership between sportswear company Adidas and conservation organization Parley for the Oceans, called “Adidas x Parley,” scoops up marine debris and uses it to make athletic shoes. Adidas also has replaced plastic bags and packaging for more sustainable materials to reduce the amount of plastic flowing into the ocean. 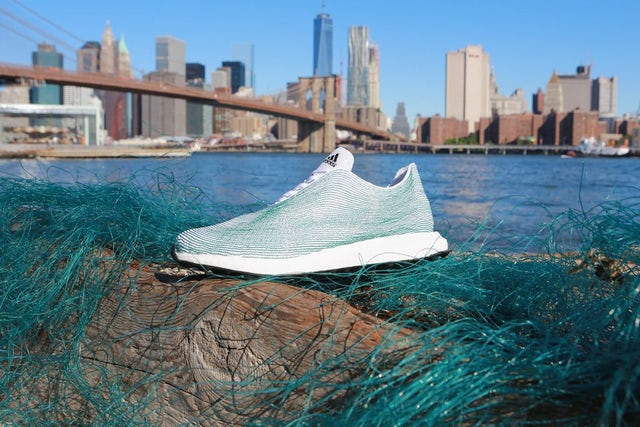 “The mutual focus is on Parley’s comprehensive Ocean Plastic Program, which is led by the Parley A.I.R. Strategy — Avoid, Intercept, and Redesign — to prevent plastic entering our oceans and transform it into performance sportswear,” said André Mendes, Adidas’ senior manager of sustainability communications. “Spinning the problem into a solution, the threat into a thread.”

In January, TerraCycle, which rewards people for sending their unrecyclable trash, such as granola bar wrappers and dog food packaging, to the company, unveiled a pilot Beach Plastic Cleanup Program. TerraCycle has partnered with consumer products giant Procter & Gamble to create the world’s first shampoo bottle made of 25 percent recycled beach plastic. The plastic is sourced from people who collect it from local beaches. And Canadian environmental group The Ocean Legacy Foundation and cosmetics company Lush are collaborating on a project to make product bottles from recycled ocean plastic trash.

Using marine debris as a raw material has its challenges. Once it enters the ocean, a process called photodegradation breaks down the chemical bonds holding plastic together. The decomposition is also accelerated by wind and waves. And often the plastic upcyclers recover is covered with algae and barnacles.

Before it can be used, ocean plastic must be sorted, cleaned, and broken down into small, uniform pieces. Then it’s transformed into pellets that can be melted into various shapes.

But this process is time consuming and sometimes expensive. And while experts say that upcycled products can raise awareness about marine debris, they note it is not the best way to address ocean plastic pollution.

“Upcycling should never be the focus of preventing the pollution,” said Syberg. Instead, he said people should be encouraged to replace plastic with sustainable materials.