Even 40 years after exposure, DDT linked to breast cancer 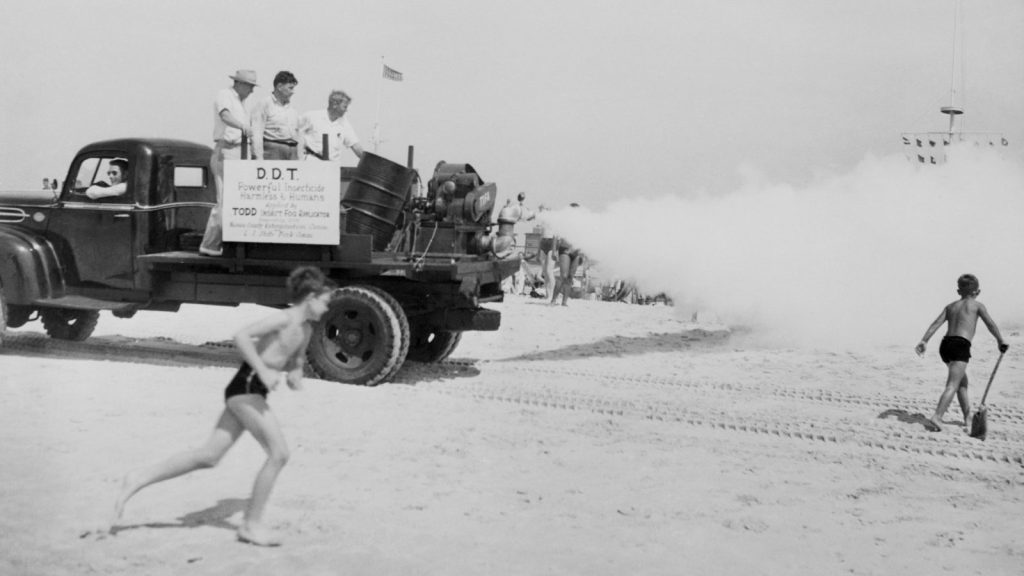 Even 40 years after exposure, DDT linked to breast cancer

According to a new study published this week in the Journal of the National Cancer Institute, women exposed to the pesticide DDT are still at risk for developing breast cancer four decades later.

The findings are based on a 50-year longitudinal cohort of over 15,000 pregnant women, many of whom had been exposed to the pesticide before it was banned in the 1970s. It found that participants who came in contact with high levels of DDT in their youth have an increased risk of breast cancer through the age 54 — even 40 years after encountering the chemical.

“There are living people who were exposed sometime in their life and who thank goodness aren’t sick yet, and might someday be sick — and it could be related to their exposure [to DDT],” Director of Child Health and Development Studies at Public Health Institute and lead author of the study, Barbara Cohn, told Grist. “We have to continue this research to understand causes of breast cancer that are broader than just genetics and broader than behaviors that people can control themselves.”

DDT was so widely used in the United States between the 1940s to 1970s that pretty much everyone at the time was exposed to some degree. The health risks associated with it were so poorly understood (and some say, overlooked) that it was sprayed directly on playing children. Author and scientist Rachel Carson called attention to growing concerns over the chemical with her seminal book, Silent Spring, published in 1962. But It would take another 10 years before DDT was banned in the U.S.

Americans are no longer spraying DDT on crops (or kids) but It’s still being used in other countries today. And because the U.S. used DDT so heavily in the past, there’s still a lingering risk of exposure today — particularly from eating fish or livestock who’ve been exposed to trace amounts of DDT in the soil and water. There’s even the chance of breathing in remaining DDT in dust.

The timing of DDT exposure is important. The research suggests that the pesticide messes with the endocrine system (which regulates hormones). In women, DDT seems to pose the most danger during times that breast tissue is developing and changing — whether that’s in-utero, puberty, or pregnancy. And because the study observed a pattern — a 40-year gap between exposure and cancer diagnosis — it can potentially help doctors detect and treat breast cancer earlier.

Karuna Jaggar, executive director of the organization Breast Cancer Action says the study is an important reminder that breast cancer risk goes beyond individual choice. “I’m angry that the cancer industry puts all this attention on life style and essentially a shame-and-blame game for women when the reality is that all of us are exposed to DDT and other chemicals that increase our risk of breast cancer,” she said to Grist. “The really important lesson about this study is not just that DDT is bad, but that how we regulate chemicals is completely broken.”

And because DDT can have such long-term effects on women and their children, we’ll continue to see its effects in future generations. Previous studies based on this cohort found that when when women were pregnant with a female fetus and exposed to DDT, that daughter was four times more likely to develop breast cancer before the age of 50. The large scientific consensus is that a woman is born with all the eggs she will ever have, so the the egg that developed into each of us was most likely formed in our grandmother’s womb. Toxins affecting a pregnant woman could have implications for all three generations.

Cohn is hoping to continue the study with granddaughters in the cohort who were in utero when their grandmothers were exposed to DDT.

Cohn said that, ultimately, she’s looking for a “holy grail” preventative biomarker that could be manipulated, the same way cholesterol levels are controlled to prevent heart disease. “The purpose [of the study] is not just to let people worry about it. We want to understand it so we can start talking about prevention.”