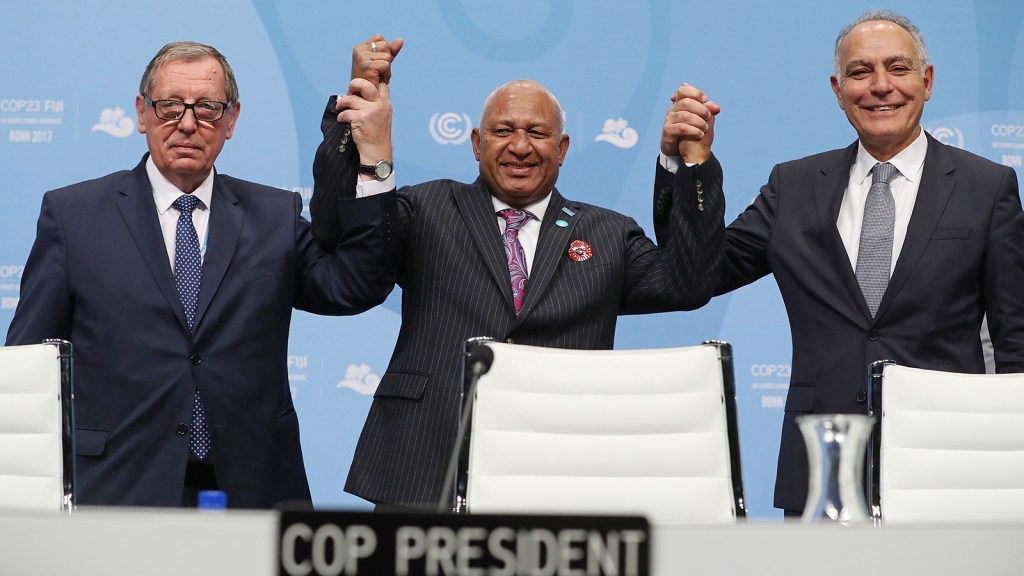 Frank Bainimarama, prime minister of Fiji and president of COP23, stands between leaders from Poland and Morocco at the conference's opening session. Sean Gallup / Staff / Getty Images
host with the most risk

On Wednesday, in Bonn, Germany, a delegation from the Pacific delivered a declaration to leaders who had assembled for the United Nations annual climate conference. Calling themselves “Pacific Climate Warriors,” the group collected more than 23,000 signatures from people all over the world demanding the pursuit of more ambitious targets than those set in the Paris Agreement.

“For more than two decades, negotiations have failed to deliver the action required to protect Pacific homes and livelihoods from dangerous climate change,” George Nacewa, from the South Pacific archipelago of Fiji, said in a statement released by the delegation.

But at this year’s Conference of Parties (COP), the 23rd round of negotiations and the second since the passing of the Paris Agreement, attendants from some of the most vulnerable places on earth are hopeful that their concerns will finally take center stage.

“This is a Pacific-led COP,” said Nacewa. “And we are here to ensure the world hears genuine voices from the Pacific.”

Although the climate talks are taking place in Germany’s capital, Fiji’s government is presiding over them, and its prime minister, Frank Bainimarama, is leading the agenda. Since Fiji is still recovering from Tropical Cyclone Winston, which devastated the country last year, Germany stepped in to provide facilities and help foot the huge costs that come with holding the conference. (France spent $197 million to host the climate talks in 2015.)

The unusual arrangement underscores the uneven power dynamic Fiji and other small island nations face: The countries that are already most affected by climate change, the ones that most need international action, are unable to actually host the forum — and truly illustrate the scope of the problem to the people responsible for acting on it.

“All over the world, vast numbers of people are suffering,” Bainimarama said in his opening speech. “Our job as leaders is to respond to that suffering with all means available to us.”

Tropical Cyclone Winston made landfall in Fiji as a Category 5 storm in February of last year. It killed 44 people and plundered more than 30,000 homes. Damage and loss from Winston amounted to 20 percent of the country’s GDP — more than $950 million dollars.

There’s a lot on the line for Bainimarama, whose country was recently ranked as having the 15th highest disaster risk, according to the World Risk Report. In addition to forecasts showing an increased frequency of severe storms — an issue also threatening islands, like Puerto Rico and Dominica in the Caribbean — Fiji has seen a rate of sea level increase nearly twice as high as the global average. Rising ocean water infiltrates fresh water supplies and damages farmland. A World Bank report forecasted that these factors will likely cause more than $50 million dollars — roughly four percent of GDP — of damages annually on Fiji’s main island alone. Residents of 64 Fijian villages are already leaving their homes because of encroaching tides, while 830 more settlements face relocation.

Despite all this, Fiji is faring better than some of its neighbors. And even as it loses land, the country is gaining climate refugees from other island nations. The government of Kiribati bought 6,000 acres in Fiji to prepare for a mass migration because its 33 coral atolls and reef islands could be completely submerged by 2100.

For the people of Fiji, Kiribati, and the rest of the Pacific, the international community’s willingness to curb the worst effects of climate change literally equates to their continued existence or total loss of cultures. So when Prime Minister Bainimarama told his fellow heads of state in his opening speech, “We must not fail our people,” attendants from the Pacific held out hope that perhaps the rest of the world would see climate change as they do — something that’s happening here and now, not a nightmare we still hope to avoid.

“This provides a very critical opportunity,” says Alfred Ralifo, climate policy manager for the South Pacific branch of the World Wildlife Fund, who lives in Fiji. “The role has amplified the voice of small island developing states at this COP and has brought to the forefront all the challenges and the needs that small island developing states face in terms of mitigation, adaptation, and ensuring that our needs are actually heard and prioritized as part of the agenda.”

Bainimarama has laid out Fiji’s vision for COP23, which includes capping the global average temperature at 1.5 degrees Celsuis above pre-industrial temperatures. Pledges by each signatory of the Paris Agreement — currently every nation in the world, though the United States plans to bow out — would only hold that rise to 3 degrees at best.

The Fijian prime minister also spearheaded an initiative to push for oceans to be an integral part of the U.N. climate talks by 2020. Oceans are only mentioned once in the Paris Agreement, but Bainimarama believes they should garner more attention because they play a critical role in regulating global temperatures by absorbing heat and carbon.

“Being a small island we have a lot of ocean resources,” says Ralifo, adding that the health of the world’s open seas has a disproportionate effect on his nation’s food and water security. “We feel that we cannot address global climate change without any action on oceans.”

Ralifo also says it is important for Fiji to push for increased financial support for small island states, not only for mitigation but also for adaptation to the effects of a warming climate. Leaders from vulnerable nations are also expected to bring up compensation for “loss and damage” — paid for by wealthier countries who emit more carbon and are most responsible for climate change.

“This COP should be about the people, not the profits of the polluters,” said the Pacific Climate Warrior George Nacewa. “Climate change is real and impacting us now. It’s imperative that we stand up for the Pacific.”