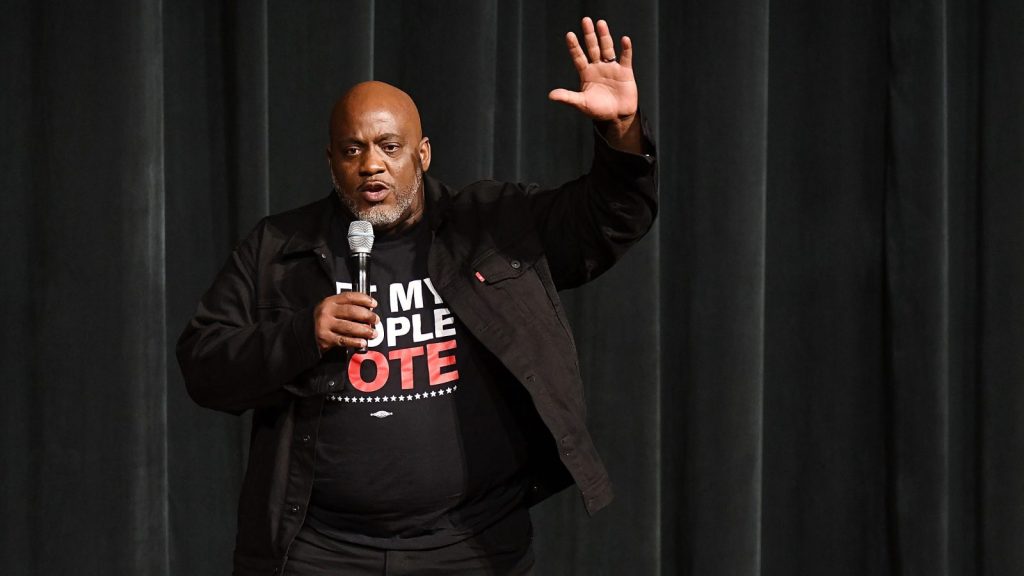 Desmond Meade, president of the Florida Rights Restoration Coalition speaks during a get-out-the-vote event in Orlando, Florida. He has spearheaded a campaign to restore voting rights to Floridans who've been convicted of a felony and have served their time. Gerardo Mora / Getty Images
A Milli

Florida has always been a state to watch. Not only is it a case study in climate change’s impact on politics, it’s a place where pivotal elections can be determined by razor thin margins. So get ready for some big changes come elections 2020. Until Tuesday, Florida was one of the few states to ban anyone convicted of a felony from voting for life. That left about one in 10 adults in the state unable to cast a ballot during this week’s midterms. But that won’t be the case come next election season.

Florida voters passed Amendment 4, which restores the right to vote to residents who have completed their sentences for a felony conviction — except for those convicted of murder and sex offenses. Organizers in Florida collected 800,000 signatures to get the amendment, which ultimately passed with 65 percent of the vote, on the ballot.

The campaign to restore voting rights was, in large part, led by Floridians who had been disenfranchised due to past felony convictions. Advocates think their participation is a likely sign the newly restored voters will actually turn out to vote in future elections. “The folks who helped to organize the campaign are clearly effective in doing the grassroots community organizing and civic engagement work that resulted in the victory,” says Nicole D. Porter, director of advocacy at The Sentencing Project, which documents reforms in felony disenfranchisement across the country. “Those folks will hopefully continue to participate in civic life.”

Restoring the voting rights of nearly 1.5 million voters is bound to have an impact in a state where Republicans just barely won key races. The gubernatorial race is headed to a recount with Andrew Gillum trailing behind Republican Ron DeSantis by less than one percentage point. Gillum had pledged to take climate change head on, and “transform our state into the Solar Capital of the United States.” In contrast, Governor-elect DeSantis has been noncommittal on on whether or not sea-level rise can be attributed to human activity (he says South Florida needs to prepare regardless).

There are a few studies that hint at how this new voting bloc might change the political game. A 2002 study by the American Sociological Association found that disenfranchised voters with felonies showed strong Democratic preferences. “By removing those with Democratic preferences from the pool of eligible voters, felon disenfranchisement has provided a small but clear advantage to Republican candidates in every presidential and senatorial election from 1972 to 2000,” the study reads.

And then there’s the question of race. In Florida, African Americans were twice as likely as their peers to lose their vote because of the state’s felony conviction voting ban.

“It’s a cumulative disadvantage that black residents face at different parts along the criminal justice continuum that reinforce that disparity and exacerbate it,” Porter explained. “It is most clearly seen in Florida when it comes to the large number of black residents who [were] disenfranchised through these voting bans.”

More than one in five black citizens in Florida were subject to felony disenfranchisement. Several studies have found that communities of color show greater concern for the environment than other groups. An American Climate Perspectives Survey from 2017 found that more than 90 percent of African Americans and Latinos are concerned about climate change, compared to about 75 percent across all races nationally. And a study published this month in the journal Proceedings of the National Academy of Sciences found that racial minority groups on average rated themselves as more concerned about the environment than their white counterparts.

Another factor: some of the re-enfranchised voters may have experienced a different side of climate change response compared to other Floridians. At the time Hurricane Michael made landfall in the area, 15 prisons in mandatory evacuation zones had not evacuated. Prisons in general have been hit hard by disasters that are exacerbated by climate change. Inmates have reported sweltering temperatures amidst heat waves and flooded cells when prisons aren’t evacuated during hurricanes. That vulnerability could turn into strength at the polls.

We don’t know what will be top of mind for Florida’s new voters come the next election. But we do know that just their ability to vote is a huge game changer for a state we all look to for which way the country might be headed — when it comes to politics and the climate.

“The constitutional amendment the voters have now approved is not the end of this saga; it is more like the end of the beginning,” said ACLU of Florida executive director Howard Simon in a statement. “In the days and weeks ahead we will seek to work with newly elected Governor to ensure that Amendment 4 is implemented as intended. But right now, we celebrate.”