The produce outside the capitol building at Madison, WI, is donated to a food pantry.(Kelly Hafermann/Flickr) Chard is one of the many plants growing in the Montpelier, Vt. state house vegetable garden.Photo: Waldo Jaquith via FlickrThere’s a new breed of urban agriculture germinating throughout the country, one whose seeds come from an unlikely source.

Local government officials from Baltimore, Md., to Bainbridge Island, Wash. are plowing under the ubiquitous hydrangeas, petunias, daylilies, and turf grass around public buildings, and planting fruits and vegetables instead — as well as in underutilized spaces in our parks, plazas, street medians, and even parking lots. The new attitude at forward-thinking city halls seems to be, in a tough economy, why expend precious resources growing ornamental plants, when you can grow edible ones? And the bounty from these municipal gardens — call it public produce — not only promotes healthy eating, it bolsters food security simply by providing passersby with ready access to low- or no-cost fresh fruits and vegetables.

But is this really city government’s job?

As long as municipal policymakers strive to create programs to reduce social inequity and increase the quality of life for their citizens, I contend that it is. Access to healthy, low-cost food helps assure the health, safety, and welfare of citizens every bit as much as other services that city governments provide, such as clean drinking water, protection from crime and catastrophe, sewage treatment, garbage collection, shelters and low-income housing programs, fallen-tree disposal, and pothole-free streets.

In Seattle, a forgotten strip of land that once attracted only those engaged in illicit behavior is now a source of fresh food and community pride. Residents of the Queen Anne neighborhood worked with the Department of Transportation to transform a neglected street median, rampant with invasive plants and pricked with hypodermic syringes, into a community garden and gathering space. They cleared the median of its debris and weeds, and have recently constructed raised vegetable beds and planted fruit trees. (I had the honor of attending the dedication ceremony back in April, and planted — what else? — an apple tree.) Volunteers plant a median in the Queen Anne neighborhood of Seattle with edible landscaping.Photo: Darrin Nordahl

Parks and Recreation staff in Des Moines, Iowa, meanwhile, are cultivating the land in neighborhood parks and around schools and community shelters. Fruits and nuts are the foods of choice for Des Moines staff, since once established, these woody perennials require considerably less maintenance than annual vegetable crops such as corn, beans, and tomatoes. Des Moines’ reasons to turn public space into food gardens are profound: bolster food security, improve economic self-sufficiency, increase community access to culturally appropriate and nutritious food, and to make connections between community members, organizations, and resources to ensure the longevity and viability of the urban food system.

Interestingly, city staff purposely plant fruits that are unfamiliar to many. By encouraging Des Moines citizens to try new foods they hope to increase dietary diversity and to improve “food literacy.” That these plants are unfamiliar to many is somewhat ironic, as many of the fruit trees and shrubs — such as paw paw, spicebush, and serviceberry — are actually native to Iowa. An eyesore of a parking garage (top) will become an edible oasis (bottom), thanks to a joint effort by the city of Davenport, Iowa, volunteers, and nonprofits. A bit further east along Highway 80, city planners in Davenport, Iowa, where I work, are refining plans to turn an underutilized downtown parking lot into an edible oasis. What is today a one-acre eyesore will become green space filled with fruit and nut orchards, garden plots, and pergolas replete with rambling grape vines. The renovation of this parking-lot-cum-park is being funded out of the municipality’s Capital Improvement Program: $370,000 is allocated for construction, with ongoing maintenance supplied by volunteers from United Way, Big Brothers Big Sisters, students from local grade schools and universities, and even the proprietor of the Thai restaurant across the street. (The produce he will plant and harvest — such as Thai eggplants, chilies, and basil — is essential to his authentic cuisine, but difficult to source in Davenport.)

The willingness on behalf of these local organizations to help the City of Davenport with the ongoing production of fruits and vegetables should placate anyone concerned with maintenance of these public produce plots. Imagine how few takers there would be if municipal leaders were to offer citizens an “opportunity” to help city staff mow the grass in the neighborhood park or weed the petunia beds in the downtown plaza. Ask those same citizens to help grow food for their community, and it is remarkable the legions who step forward, trowel in hand.

Higher-profile landscapes around city halls are also shedding their purely ornamental visage for an edible makeover. Such garden transformations have already occurred in Baltimore, Md. and Portland, Ore. In Montpelier, Vt., chard, beets, kale, collards, and red lettuces adorn the public grounds around the historic statehouse. Madison, Wisc. staffers ripped out the flowers around the Capitol and replaced them with potatoes, cabbage, carrots, corn, peppers, and tomatoes.

Municipal government officials have no doubt been inspired by First Lady Michelle Obama’s transformation of a portion of the White House South Lawn into a vegetable garden. But there’s an important distinction between the produce being grown at the White House and that at city hall. The food from the First Family’s garden is primarily for them and their dinner guests. At these green-thumbed city halls, the growing of food is an endeavor by the people, for the people.

“I want people to see city hall differently — that it’s our public land, and that it works for us and with us,” Sallie Maron, a Bainbridge Island resident who recently helped transform the landscaping around the town’s city hall into an edible bounty, told the Kitsap Sun. The volunteers planted more than 40 plants, including cauliflower, kale, and strawberries, and any resident is welcome to grab a tomato and some basil for their dinner. As another Bainbridge Islander remarked, “It’s for people in need or people who just want to try some fresh food.”

The Bainbridge Island folk were inspired by the tale of Provo, Utah, where — as in many municipalities across the country –
– the recession has reduced budgets and forced cutbacks on maintenance. Fussy ornamental landscapes adorning civic places just don’t seem a high financial priority for elected officials. City planners in Provo, Utah germinated seeds for the city hall plaza in their makeshift greenhouse — in this case their cubicles in city hall.Photo: Darrin NordahlBut nobody likes to look at empty plots of dirt or weed patches outside their window. So in Provo, three planners volunteered their time to re-establish the landscape outside their city hall — but did so in a manner that adds immense value to the landscape and the community. They sowed melons, beans, cucumbers, and beets in the many brick planters.

During their first season (which was last year), the city planners harvested 350 pounds of produce from 250 square feet of dirt and donated it to the local food bank. This year, with a bit more gardening know-how under their hats, they plan to cultivate an expanded 500-square-foot space from which they hope to reap more than 1,000 pounds — quite a harvest from such diminutive plots. (The group is also blogging the progress of the city hall “farm.”) San Francisco planted a Victory Garden in front of its city hall during World War II.Photo: SF Public LibraryAs with many of the urban agriculture projects, the idea of growing food on municipal land is not new. (See the introduction to the Feeding the Cities series, “The History of Urban Agriculture Should Inspire its Future.”) Vegetable gardens have helped bolster America’s food supply when times were tough during the Long Depression of the 1890s and the Great Depression, as well as both World Wars. The most popular of these public veggie patches — the Victory Gardens of World War II — were planted not only by patriotic citizens around the nation, but by city governments in public spaces to provide, teach, and inspire their people.

With unemployment in many cities, food stamp use, and pressure on food banks at an all-time high, it simply makes sense to grow food, not flowers, where possible. Victory Gardens supplied the nation with 40 percent of its fresh vegetables. It is staggering how much edible bounty can be produced from small-scale gardening efforts on public land. The time is ripe to revisit Victory Gardens in public spaces: with just a little bit of organization and encouragement from our government officials, we could bring the community together to brighten the landscape and nourish the needy. 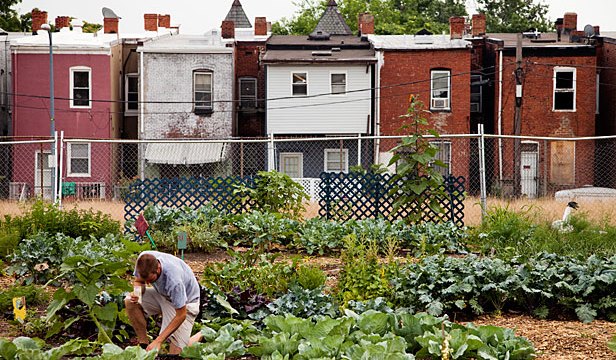 From mid-May through July, Grist readers followed along as the Breaking through Concrete guys hit the highway to visit a couple dozen urban farms across America. Here, they sum up their trip and share some of Michael Hanson's most indelible …
See all articles in this series